Preface: As a white, heterosexual, cis, male, I'm granted, from birth, an extraordinary amount of privilege. One part of this privilege is the ability to make aloneness a choice; rarely, if at all, in our society will I be forced into aloneness because I'm different. This is something I keep in mind, but I'm unsure how to address. As you read this essay, please remember the position I come from and critically engage with how that effects the thoughts I have.

On Friday evening at 7:30 p.m., I was alone taking a nap on the floor of Clef's office.

The two people I spend 95 percent of my waking hours with had both left for different parts of the country, my brother who lives in San Francisco was traveling to NYC, and, just like that, the number of real friends I had in the Bay Area was reduced to zero.

I'd already finished reading a paper and had a few more lined up, was communicating over the internet with people I didn't know, and planned on maybe watching an episode of Boardwalk Empire before I biked home, did my laundry, and went to bed at 11pm. When we're alone, we've been conditioned by society to believe that we should stay alone. 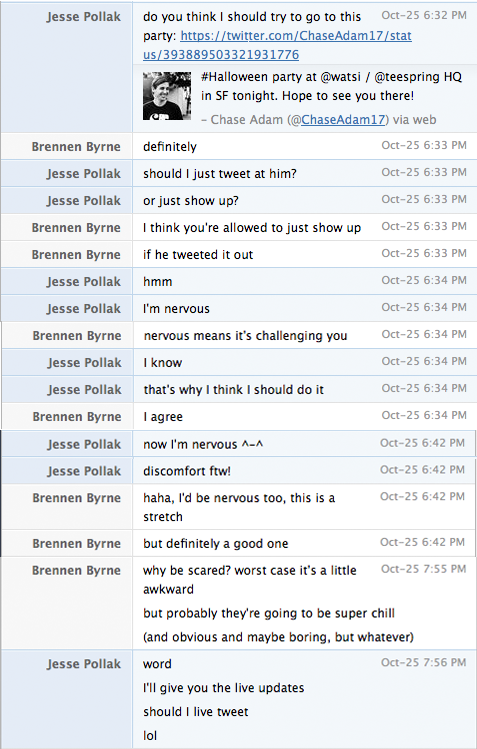 The prospect of going to a party where I knew no one and wasn't technically invited scared the shit out of me. As I sat at my computer finishing up a support issue, I ran through the possible worst-case scenarios in my head.

I could get turned away at the door. There might only be a few people there and I'd have to explain who I was and why I was there. I might stand in a corner by myself staring awkwardly at my phone while everyone else around me had a wonderful time. People might think "look at that weird guy all alone in the corner." People might laugh me out the door.

As I pondered the scenario more and more, the actual worst case scenario became apparent: I'd show up, have one bad interaction, which would have zero impact on my future life (because it would almost certainly be remembered by no one but myself), and leave.

So, with no friends and no plan, I headed across the bridge from Oakland to San Francisco.

If you put yourself out there, people are kind

As you can probably guess, none of my worst-case scenarios came to fruition. When I walked in, the first person I met was Netta, who upon hearing that I'd come alone, quickly introduced me to the entire Watsi team. As the night continued, every person I met was overwhelmingly warm and welcoming.

Yes, I stood outside the door awkwardly until another group of partygoers came because I didn't know the combo to get in (but we made friends in the elevator and they didn't seem to notice my alone-ness). Yes, I had more than a few moments where I stood in the middle of the crowd looking awkward (but I wasn't the only person doing that). Yes, a few people seemed taken aback for a moment when I told them I'd come alone and "uninvited" (but they quickly transitioned to introducing me to their friends).

But, for every uncomfortable moment I had, there were 10 filled with smiles and fun conversations. And, in all the moments I had by myself, I had the chance to cement some thoughts on being alone that I'd been pondering for the last few months.

Being alone can be liberating

As we create friendships, we inevitably construct identity frameworks that our relationships operate within.

By facilitating connection through uniformity, however, these frameworks also constrict how we act when we're with people we are intimately familiar with. If a friend understands us through a certain identity framework, differing from that framework while around them can potentially cause tension and confusion.

This dichotomy is challenging: in order to nurture the friendships we have, we need to maintain the identity frameworks we've created; however, in order to grow as people (if we accept that growth is important), we need to create new ones and change old ones. Questioning these frameworks is undeniably important, but it is also very hard.

When alone in a sea of strangers, no such frameworks exist, so change is easier -- we can experiment with who we are and how we act. We can construct a new identity framework for every new conversation we have. We can try being someone else.

Every time we try something new, we learn something new about ourselves. When we push the boundary of the frameworks we've created, we often find that there's really no boundary at all.

Pushing back on discomfort is important

Humans feel uncomfortable a lot. The tingle down our spine, the slight nausea, the racing heart.

One solution to this discomfort is to step away from situations that make us feel it. To surround ourselves with things we are familiar with. To interpret discomfort as a binary absolute and determine that we'd rather have no discomfort than some.

Another cure is to try to understand why we feel uncomfortable. To put ourselves in situations that make us feel discomfort and critically examine the underlying emotional feelings and logical thoughts that prompt that sickly feeling in the base of our stomachs. To interpret discomfort as a spectrum, wherein we can identify, and address, factors, which push us towards one side or the other. To be comfortable with feeling discomfort.

Being alone, both in a crowd and by ourselves, can be an extremely valuable exercise in questioning and understanding that discomfort.

We're not the only ones alone

In every situation we enter, there are always other people who are alone. Some may literally be alone, like me at the Watsi party. Others may be physically surrounded by friends, but emotionally alone in a crowd. Either way, recognizing and understanding that the aloneness we all feel is an undeniable part of the human condition is liberating.

When we accept that our feelings are just permutations of a normal condition, we can begin to address the specific reasons we feel alone. When we accept that everyone feels alone, the weight of being an outsider starts to lift and it can become easier to reach out to others.

Aloneness is not loneliness

The two are often conflated in modern society -- but they don't have to be.

When we're alone, we don't have to be lonely.

I'd love to hear your thoughts about being alone in the comments or on Twitter.

Jesse Pollak is one of the co-founders of Clef, a company working to replace passwords online. Visit Jesse's website at jessepollak.me.

Thanks to Andrew Russell, Faye Wang, Alexa Cerf, Brennen Byrne, and Mark Hudnall for reading drafts of this.