Discrimination sucks. This is not revelatory, by any means, nor is it novel, nor is it necessarily unexpected. And yet, when it happens, it never fails to feel like a sucker punch to your smiling, unsuspecting face.

I've had my share of dirty looks as my (ex-)girlfriend and I walked into a restaurant holding hands. I've endured the eye rolls and the condescending smirks when I talk about Jesus like He's my friend. And I'm fine. Resilience is part of what makes us, as humans, so great. But I remember vividly the first time I felt discriminated against by "one of my own." It shocked me, because I feel like when you belong to a group of people who are categorically discriminated against, when you are having to defend yourself or your lifestyle on a regular basis, wouldn't that cause you to be less judgmental all around? Not wanting to ever make someone feel lesser, because you've experienced firsthand how crummy it feels when someone makes you feel like less of a person?

It was two summers ago, and I was ecstatic to go to my very first all-lesbian shindig. I'd been invited by a new client of mine, and I was both terrified of not fitting in and excited at the prospect of meeting new (potentially hot!) friends. Despite living in San Francisco, all my gay friends were guys, and all my girl friends were straight. I rarely went to Judith (lesbian) bars, since my girl friends either scoffed at not being able to meet eligible men or bowed out because it "wasn't their thing." Part of me resents the lack of support in that area, and part of me knows I never really fought for it. I mean, I wasn't gay, so why would I push to go to a gay bar?

There is also the fact that after my girlfriend of three years and I broke up, I jumped back into the world of men. It was fun, and, let's get serious, it also saved me from dealing with the hurt of disappointing my parents again. They were devastated for me when I was dumped and heartbroken, but there was a piece of me that wondered if they also felt a sense of relief. I envisioned them holding their breath, waiting to see if the next partner was going to have breasts or not. When someone asked me if it meant I was straight again, I would usually just answer, "Mostly straight." I am somewhat embarrassed to admit this now, but I think I was afraid to claim the term "bisexual" because it seemed so finite, or too strong of a revealing label, like "gay."

Then, the party. I showed up on Saturday afternoon, nervous and wondering if my outfit was cute enough but also Judith enough, and if anyone would appreciate my tan legs, and if my hair was too girly. My client welcomed me and started dragging me around for introductions. The spacious backyard was teeming with women of all ages and looks, and my feeling of intimidation soon ebbed away as I conversed with the happy revelers. I smiled and socialized, and in my mind I thought, "See? You can do this. You fit in. They're drinking, you're kind of cute; you've got this in the bag." I loosened up a bit and started flirting back. Then this girl started talking to me, running her fingers down my bare shoulder while complimenting my tan (Yes! She noticed!). I can't even remember what we talked about, nor does it matter, but I do remember when she asked, "You're gay, right?" I paused, not because I knew back then that it was a loaded question, but because I didn't want to just say "no," with no explanation as to why I was at an all-Judith party, happily flirting.

Her vocal response was almost as immediate as her physical response. "Oh, really? This is a gay party. Also, I'm not really interested." She looked irritated as she walked away, and I'm sure I looked stunned. It took me a few minutes to shake it off, and I was saved by a cute blonde girl who walked over with an extra drink in her hand and a friendly face. I couldn't help but share my experience with her, since it was sitting on me, and any feeling of sexiness that had been there earlier had since been quashed.

Her advice shocked me that day: "Claim gay. If you like a dyke, just tell her you're gay. Trust me, if you let the word 'bi' escape your lips, you've pretty much ruined your chances. I mean, I'm cool with bi girls, but most lesbians are not. They think they can't trust you, that you'll turn on them if the right guy comes along, that you're not serious." So I was educated, and a little humbled.

That first experience became one of many, and while I've become more accustomed, I remain puzzled by discrimination coming from someone who belongs to a group so frequently discriminated against. I asked a few of my closest Judith friends what they thought about bisexuals, and I was rewarded with personal stories that touched me and affirmed my own feelings. Unfortunately their stories are too long to print here, but they agreed that when it comes to sexuality, it is not always cut and dried. There is a lot of grey between black and white, and it is harmful when we discriminate or hate on people because we do not understand their place on the spectrum. We need to focus our energy on ending hate and discrimination against the gay community in any way possible, but we can't forget that bisexuals are part of that community, too. 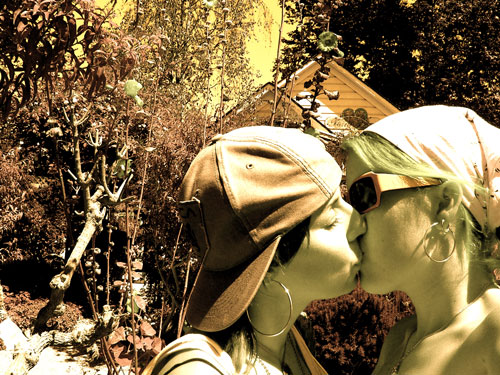