Self identity is a personal issue. How a person self identifies is really a matter of their own concern. I, myself, have self identified a number of ways throughout my life. Anyone that tried to put me in a box really pissed me off. Nobody can tell me who I am. And of course I would never even attempt to tell someone who they are, but do blacks in the Caribbean even consider themselves black? 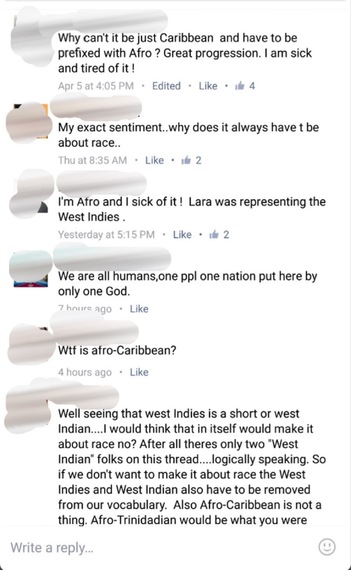 This question has been plaguing me since the Oscars when the question of the award show's diversity came into discussion. The responses to the issue by my fellow Trinidadians still residing in Trinidad sort of shocked me and made me painfully aware that they do not identify with the struggles of blacks in America. This could also be true in regard to us not relating to the struggles of blacks worldwide, but I haven't been privy to such exchanges yet.

As I think back honestly, I noticed this back to the Mike Brown atrocity. A Facebook friend that I have known since childhood, a black, highly educated man and when I say highly educated, I mean university level, made fun of Mike Brown's mother's speech at the United Nations. He focused on the color of her hair and the style and implied that this hairstyle was an example of her bad parenting and the horrible result that it incurred. When I read the post on Facebook, my heart started to pound; I tried to ignore the comment and move on, but I couldn't move, I just stared at the words hoping they would change their formation to mean something else -- they never did. And as much as I hated confrontation, I had to say something.

What ensued was a horrible look into the middle class black Trinidadian mind. I first interjected that cultural differences in hairstyle does not equate with bad parenting, nor should it imply that such a thing could justify the death of a young man. In response, one of his friends, another black male but I cannot confirm a middle class existence, informed me that Mike Brown's death was not more important than any other death in world. I didn't expect to be addressed by anyone I didn't know as I was addressing my friend that posted the comment, but I guess he felt so strongly on the issue himself that he had to address my comment. I then countered that although his death may not have been more important, that it was just as important as any other unjust death in the world. It didn't end there, between the two of them, they continued arrogantly making fun of his mother.

At first I didn't get how they could not relate or identify on some level with this woman's pain, or the injustice of her son's death. As black males I thought they could see how harshly and unfairly they were judged in the world as a whole and know what it was to be treated unfairly just because of the color of their skin. But then it dawned on me, they are in denial, they have to have some form of defense to deal with the everyday reality that something unjust or unpleasant can happen at any time and nobody would care who they were because they are black.

They spend their entire lives trying to prove they are good enough, that they are not like those other blacks, the ghetto blacks, that they have education and money, that they have good upbringing, and they hope that this is evident in their speech or their walk. They hope that is the reason that nothing terrible has happened to them thus far. They have to believe this story they tell themselves to feel safe and blame the terrible things that happen to others on their bad parental raising, dealing in drugs or just being terrible people. Which can be true in some instances but is not always the automatic reason.

This again came to my attention with the issue of diversity at the Academy Awards; social media again was the vehicle through which the discourse occurred. Comments predominated such as: why are blacks always whining about something; they should work harder to be nominated like the other ethnic groups; and Will Smith is only doing this because he wasn't nominated otherwise he wouldn't care. Now, I didn't watch the Oscars because I wasn't about to support a show that didn't award diversity but I saw a video of it on Facebook. I know Facebook seems to be the source of my issues, but anyway, another friend posted his support of Chris Rock's opening monologue, which I hated, and I have admired his work forever, and still do, I just did not enjoy his Academy Awards opening monologue. It literally made me cringe when he referenced hanging grandmas, but I digress. He was in a tough position and he was trying to make everyone happy, I guess; I don't know what it was like for him to be in such position, or what I would have done if I was in the same position, but I definitely didn't like the monologue and couldn't understand how any other person of color could. So this question came to me, do black middle class Trinidadians identify as black?

The answer is a tough one, and I don't even know if I can answer it, but I will try to state what I have observed from others and my own personal struggles with it. What I have observed thus far is that we do not identify as black. We try our hardest to prove we have other ethnicities in our heritage like my great-grandmother was Chinese or Portuguese, my great-great-grandfather was Scottish or Indian, which is all good but we never say my great grandfather was a black slave; we never boast about our black ancestors. I am not saying we can't be proud of our entire heritage, but I am asking, why don't we ever shed light on our black ancestors too? They are just as important as all the others. I am now just as proud of my great grandmother Mama Annie, a black woman, as I am of her Scottish husband Duncan Campbell. I saw this again in the resistance by black Trinidadians to be acknowledged as Afro Trinidadians. Some argue, we are all Trinidadians, so why do we need to be identified as Afro Trinidadians, but I don't see Indian Trinidadians having any objections with being acknowledged as Indo Trinidadian. They embrace their Indian roots.

I do not believe all Caribbean islands are the same though. I think Jamaica has a better acceptance of their black selves than Trinidadians do, just by their Rastafarian movement alone that is evident, and their pride in their Maroon history and Queen Nanny. Do they still have issues with colorism? Yes of course; that is obvious too by the skin bleaching of some, but they know that they are black. They are not in denial about it and they don't try to prove they are less black by referring to their non black ancestors. If Rihanna's comment about black girls being beautiful under a pic of her and her friends at last Crop Over is any indication of Bajans' acceptance of their black roots, then it speaks for itself.

I do not blame ourselves; however, the whole societal system is to blame. The colonial system of the European standard of beauty and success has been ingrained for hundreds years and it may take just as long for it to be eradicated. Are we making progress? I think so. I sincerely hope so and the more conversations we have about it and the more aware we become of it, I know we will become more comfortable identifying as black too.