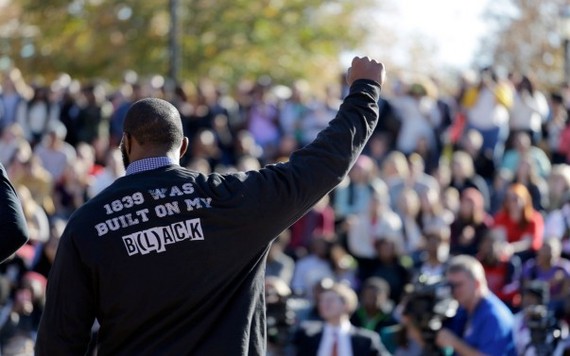 I don't know what it's like to be an average Black student at the Mizzou in 2015, though I imagine it's not very different from what it was like when I studied there in the early '90s. Along with a sense of community among a Black student population so small it seemed we all knew one another, there was the ever present sense of fear that came from having to routinely determine which racial slight you would address and which you would ignore; which racial joke you would complain about; whether you could forget seeing "niggers go home" chalked on the side of Jesse Hall as you work on a paper due in the morning.

Twenty-five years ago, to be a Black student at MU meant your university had yet to recognize Martin Luther King's birthday. Today, it means you were likely in high school when Trayvon Martin was killed, and later watched in vain as your institution said nothing about the gratuitous killing of 18-year-old Michael Brown just two hours away in Ferguson, Missouri; it means coming to the Black Culture Center only to find cotton balls strewn about the yard; it means having a Black president of student government, Payton Head, as well as members of the Legion of Black Collegians, called "nigger" on separate occasions; it's finding a swastika drawn in feces on a dorm wall; it's knowing these are only the incidents that have been reported.

To borrow from James Baldwin, to be a Black student at Mizzou, then as now, and have a basic sense of justice, "is to be in a rage almost all the time."

But it also means you enter into a decades long tradition of black student activism at the University of Missouri that brought an end to segregated student housing, pushed the university to hire Black faculty, and played a key role in the campus' anti-apartheid movement. It was in this tradition Black students were acting when they formed Concerned Student 1950, when Jonathan Butler to start a hunger strike to get the university's attention, when they erected a tent city on the quad that caught the attention of a black football player. And they have joined this tradition to a wave of student protests across extending from California to New York.

When I learned of Concerned Student 1950 homecoming protests in October, I was reminded of protests I participated in the early '90s. At the beginning of the year, during Greek Town's Bid Day Bash celebration, a White fraternity brutally beat and blinded a local Black high school student. When we learned the administration would only give the fraternity a slap on the wrist, we reached our tipping point. The League of Black Collegians, the Black student government, planned a protest march during homecoming to disrupt the parade and force university and state officials to listen to our demands. As we prepared for the march, a car carrying then Miss America, Debbye Turner, an MU veterinary student, drove by, and a few of us asked if she would carry a sign in solidarity.