Both Hillary Clinton and Bernie Sanders have made reducing or eliminating the price of college central parts of their campaign platforms, the idea being that the high cost of college is not only a barrier to going to school but also creates unsustainable amount of student debt for graduates.

But what if your socioeconomic status growing up impacted how much you would earn, even with the same level of education as others?

It turns out that's exactly what happens.

Even if you are among those who grow up poor and are able to obtain a bachelor's degree, you won't have the same proportional growth in earnings as those that grew up wealthy. According to the Brookings Institute, while the "actual level of earnings may not match others..the percentage increase, relative to a high school diploma, ought to be comparable." 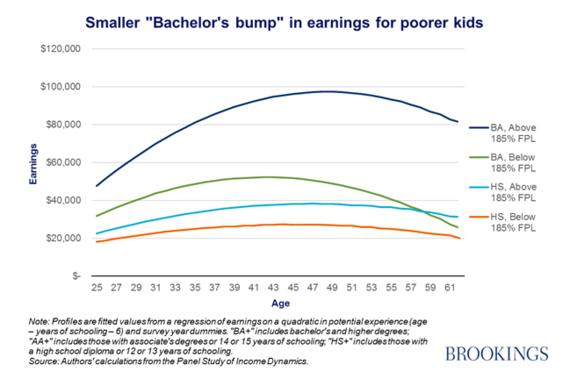 Unfortunately, the earnings gap between poor and non-poor college graduates also widens as time passes. While degree holders from low-income backgrounds start their careers earning about two-thirds as much as those from higher-income backgrounds this ratio declines to one-half by mid-career.

Well, that's one actual reason for a midlife crisis.

There are a number of factors that could contribute to these results, from the colleges that low-income students attend to the networks that their higher-income peers have access to. One thing for certain though is that a more holistic approach is needed when examining policy solutions to fighting poverty and income inequality.