When I began my undergraduate degree in wildlife science in the mid '90s, I was somewhat naïvely surprised by how animal welfare was not generally considered germane to discussions about conservation and sustainability. I found this disappointing, because the whole reason I pursued a wildlife science degree was that I cared about animals. However, I often got the message that in order to be a good scientist, I needed to care less.

For example, as part of a lesson on "mark and recapture" (a technique for surveying wildlife populations), students were instructed to capture wild field mice, cut off the toes of one foot, and then release them again. The missing toes were the "mark": If you catch a mouse with toes missing, you know he's been caught before. When I objected to this lesson, my professor told me that if I didn't want do such things, then I should get out of the wildlife program.

I didn't listen. I didn't get out of the wildlife program, and I did not cut the toes off mice. I believed then, as I still believe now, that compassion for animals and concern for the environment are two sides of the same coin.

Fast-forward to today. I am campaigning with Cruelty Free International to end the use of animals in cosmetics and household product safety testing, and I find myself making the argument that caring about animals is good science and good business.

Let me start with the first point: good science.

Humans are not rabbits, or mice, or guinea pigs. It's not too surprising, then, that transferring the results of animal tests to humans has proven to be problematic and misleading in many cases.

Some tests involving mice or guinea pigs for skin sensitization (allergic skin reaction) tests only predict human reactions 72 percent of the time, while the non-animal test known as the CAESAR is credited with correctly predicting reactions 90 percent of the time. Studies comparing hundreds of accidental human eye exposure to assorted household products with the data collected from the deliberate dosing of rabbits' eyes with the same products in the cruel Draize eye test have found little or no predictive value for the rabbit test. Further, the carcinogenicity test involving rats is also notoriously unreliable, with an estimated prediction rate of only 42 percent.

Alternative methods are tests that use simple organisms like bacteria, or tissues and cells from humans (known as in vitro tests), and sophisticated computer models or chemical methods (called in silico and in chemico tests) are increasingly more predictive of human response than the now-antiquated animal tests.

This leads to the next point: good business.

There are several reasons that opting for non-animal tests makes good business sense.

First, modern non-animal testing methods not only tend to be more accurate but tend to produce results more quickly and at the same or lower cost than the animal tests they replace.

Today the in vitro (non-animal) test for skin and eye irritation can be conducted in a day, whereas the corresponding rabbit tests take two to three weeks, and contract testing facilities charge approximately the same for conducting the alternative as they do the rabbit test. One alternative test for predicting skin sensitization can be conducted in one day, while the corresponding mouse test takes at least six times that.

In addition, the European Union and India now have a complete ban on the sale of all new cosmetics if the cosmetic, or any ingredient in the cosmetic, has been tested on animals, further making the economic case to embrace alternatives.

Possibly the biggest economic argument swearing off animal testing for cosmetics and household products is that it is what consumers increasingly demand. A March 2015 Neilson survey found that "not tested on animals" was the most important packaging claim among those surveyed, with 57 percent responding that it was "very" or "moderately" important. Respondents also placed a high level of importance on products labeled "all natural," with 53 percent of those surveyed responding that the claim was important.

Forward-thinking companies have taken the public concern for animals seriously. According to Organic Monitor, a market research firm, China's animal-testing requirement has created a dearth of organic and natural personal care products in the Chinese market, as ethically minded companies have either left or decided not to enter the Chinese market because they know that doing so would be a public-relations faux pas. Thanks to international pressure, including the efforts of Cruelty Free International, progress is now being made in China to increase the acceptability of non-animal tests, which will open the market to cruelty-free companies.

Conscientious companies and consumers understand that compassion for animals and sustainability are both important. In recognition of this, Cruelty Free International was declared a winner at the 2014 Sustainable Beauty Awards in Paris, winning in the prestigious "Sustainability Pioneer" category for outstanding contribution to sustainable development in the beauty industry. In May, I will be presenting at the Sustainable Cosmetics Summit in New York on the scientific and economic benefits of going cruelty-free and providing an update on the success Cruelty Free International is having in changing international policy on animal testing around the world.

It truly is refreshing to see that since my college days the tides have turned and it is increasingly acknowledged that caring about the environment and caring about animals go hand in hand. 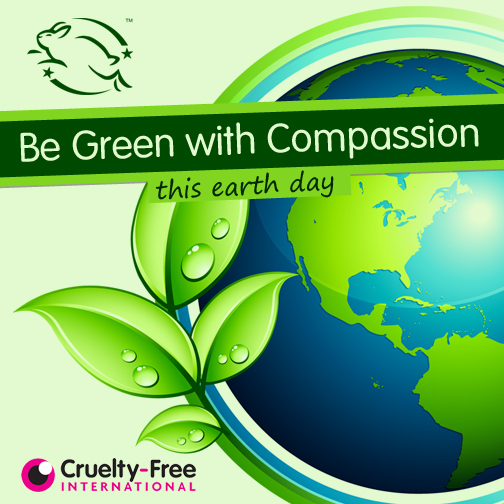