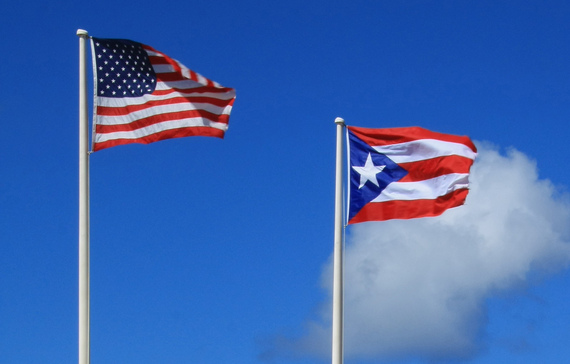 After studying abroad in England for 10 months, I recently moved back to Maryland to finish my senior year of college. While I'm glad to be back to finish my final year of college, I can't help but dread the unavoidable ignorance expressed towards my ethnic background.

I grew up in Puerto Rico in a bilingual household to a Cuban father and a half-American mother. Although I grew up in the island, my life consisted on a melting pot of cultures. I personally felt more in touch with American culture, since I related more to American pop culture, literature, music, and other aspects.I always thought I would be able to fit in well if I moved to the States for college, considering my identity with the culture and my upbringing.

However, I was treated as an outsider. During my first week of classes, I had a short writing assignment due for my English class. My essay had a few mistakes, but nothing out of the ordinary for a typical college student. However, my professor met with me in his office to ask if I was having difficulty with it because English was my second language--which it is not.

Little did I know that it was only the beginning of people making assumptions about my background.

I experienced various instances of ignorance towards my ethnicity, such as my friends asking me to speak in an American accent, a classmate asking if I had ever celebrated Thanksgiving, and people asking why I'm white and Latina (without being able to understand that Latina is an ethnicity, not a race). I wasn't always treated as equal to my classmates, which frustrated me. My professors would discuss how proud they were of me being able to write well even if English was my second language (even if they never bothered to listen when I tried to explain that I'm fully bilingual). I also experienced having a therapist interrupt our session to ask me extremely ignorant questions about Puerto Rico, such as "Why is your English good?" and "Why are you here in America?"

The lack of understanding of my cultural and ethnic identity made me feel confused about my own views of my identity. I had gone from being called a "gringa" in high school to being the Latina foreigner. I didn't fit in with the other Latinas or Puerto Ricans from my college, nor did I feel completely accepted by my American peers. I felt anxious each time I had to talk to anyone who was American because I was afraid that my accent would not sound American enough to their liking. I stopped letting people know where I was from and simply allowed them to guess, which caused many people to think I was Russian.

My experiences vastly differed when I moved to London. Most people would assume I was American due to my accent. Whenever I'd let them know that I was from Puerto Rico, they'd typically reply "It's territory, so it still counts" or would ask me where it was geographically located. It astounded me how educated they were and the lack of ignorance that came after disclosing my ethnicity. Nobody questioned my racial identity or my ability to write in English. My academic potential was never doubted. It made me feel at ease, like I had finally found a place I belonged.

While not everyone in Europe or in the UK may be as knowledgeable or accepting of people's racial and ethnic backgrounds, my experience was very positive. I don't expect things to have changed in Maryland or in the States in general, considering the ignorance that has been recently expressed in the media, such as Kelly Osbourne's ridiculous statements about Latinos cleaning bathrooms. I do wish that people would educate themselves more about the damages that come with the stereotypes of Latinos. We are not the same. We each have our own interests, goals, talents, and stories. We do not look the same, nor do we act the same. We deserve to be represented and treated in a better way than we are.