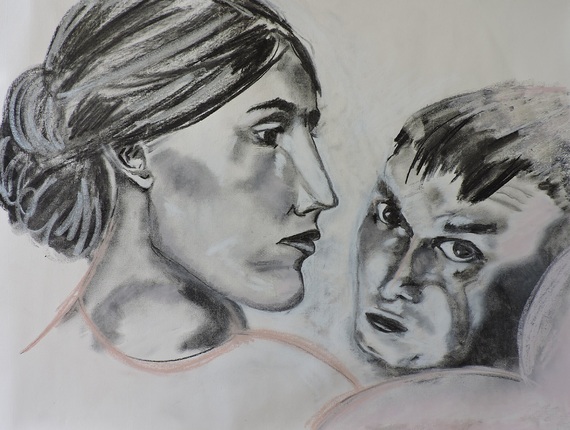 So I took off my clothes and told the story of my gender transition for a What's Underneath video, as part of my Being Transgender -- Naked project. The first question that the creators of the series asked me afterward was: How do you feel?

My answer begins with another inquiry: Why would a criminal defense lawyer -- or anyone -- disrobe on the internet and reveal vulnerabilities?

First I will confess that my experiment in stripping down emotionally and physically has not worked as I imagined. I had forgotten how the feeling of vulnerability breathes life into the struggle between truth and fabrication.

Neither is without a disguise.

As Virginia Woolf warned in recounting a story of the days leading up to her talk on women and fiction in A Room Of One's Own: "Lies will flow from my lips, but there may perhaps be some truth mixed up with them; it is for you to seek out this truth and to decide whether any part of it is worth keeping."

But imagine if truth and lies are both spoken honestly. Then what?

Being Transgender -- Naked is this one worker's search for a connection between the personal and the professional. It is the belief that symbiosis exists, and that significance in the world amounts to more than just hope.

But what if this idealism is just a lie that flows from the lips of my mind, as it seeks justification for existing from one day to the next? Will I tell myself anything to wake up in the morning, get through the day, and inject meaning into activity where otherwise there might be none?

Even faced with the reality of pointlessness, I still resist the proposition that work is just work, and nothing more.

The reason is that I see so much injustice in justice.

In my first terrorism trial, for instance, my client was prevented from testifying about his own prior statements, which the government had used to argue that he lied. The courts dodged the problem instead of addressing it.

And then there are federal drug prosecutions. Somehow, a person's intent and knowledge regarding the type and amount of drugs is irrelevant; and, in conspiracy cases, prosecutors need only prove an agreement between two people -- in other words, a thought crime.

As hopeless as this state of affairs may seem, there is a shield against the law: stories.

Each client has one, even if shame or guilt has secreted it away.

Telling my clients' stories starts by asking them to be vulnerable and share their past with me. In order to help them, I ask them to bare their souls.

It may be the first time they have ever done so.

Why should a client trust me, or any lawyer?

Maybe for the same reason that Truman Capote wrote this observation of a character weighing disclosure in the author's first published novel Other Voices, Other Rooms: "...in this case he could not see where the truth would cost him more than a lie."

So too it is in the theater of justice, where the courtroom writes a fiction of facts upon which the outcomes of cases and lives will turn.

Candor assumes value in this equation because vulnerability sheds so much light there is nowhere to hide. Can you think of any reason to deny mercy to someone who reveals the truth, in the faith that their sincerity will be embraced?

Sharing my own story leaves me exposed, raw and vulnerable to one truth above all: I am no lawyer without the clients I represent, and, like them, I am human first.