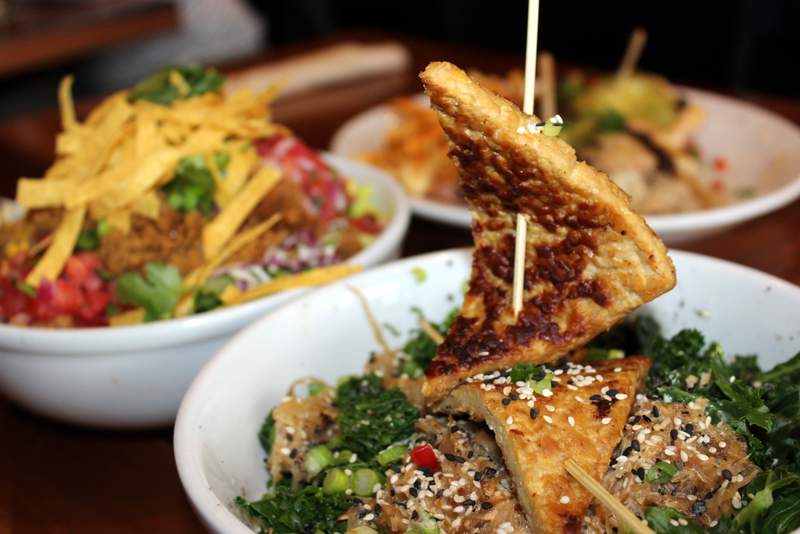 The line at Native Foods in Santa Monica, California is long and slow moving. Patrons don't seem to mind -- they blithely chat, eying the display of cupcakes in a glass case near the front and analyzing a sign displayed, detailing explanations offered in the counter-service restaurant's giant menu.

Explanations are needed -- evidently from both the sign and from behind the register - because Native Foods serves only Vegan faire. Wheat and soy-based substitutes serve to disguise menu items to both the eye and the palate, and those new to the lifestyle or choosing to try it for a meal need the extra background.

Native Foods is part of a growing market of vegan restaurants springing up in Los Angeles, that cater to a growing demographic. In a city known for body consciousness, health trends, and environmentalism, brands, businesses, and celebrities have embraced veganism and established a vibrant subculture that offers meatless meals, events, and organizations to the burgeoning population of vegans--and those who try it every once in a while.

"There is just no question in my mind that right now Los Angeles is really the epicenter of Vegan culture," says Colleen Holland, the Associate Publisher and Co-founder of VegNews, a vegetarian magazine based in San Francisco. She explains that, as an editor she must have her finger on the pulse of where hotspots are happening, and Los Angeles has become the preeminent destination for veganism.

Hollard attributes the growth in LA to demand for healthy food, but also says it has become part of the LA identity and has worked its way into mainstream food culture. "In many cities vegan food is a destination for Vegans," she says. "It appears to be it is very much a part of the culture no matter if you are Vegan, Veg, Omnivore, in the entertainment industry -- whatever your background it is really acceptable. That is the big shift."

Veganism is not an LA idea, however. In 1944, six like-minded vegetarians gathered around a table in London. After years of debate and discussion within the vegetarian community, Donald Watson, a British woodworker, decided it was time to create a distinction between vegetarians who abstained from all animal products and those who did not. Along with milk, eggs, and anything else derived from animal labor, the middle letters from the word "vegetarian" were dropped and Veganism was officially born.

The movement that began out of empathy for animals spread rapidly, and now includes millions of members around the world. The cause has shifted as well, adding new advocates concerned with both the environment and healthy living.

Veganism today denotes an identity that many Angelinos already embrace, however, and LA has adopted the lifestyle as its own. Though most are unwilling to fully commit, and a Gallup poll taken in 2012 suggests that only 2 percent of Americans consider themselves vegan, abstaining from meat for a meal has become mainstream and is considered has been named one of the top five consumer health trends by the Values Institute at DGWB.

The practice is referred to as "flextarianism" and Hollard says it is fueled by vegan activism and the strength of the vegan community in Los Angeles, and is helping further the cause.

"I think it is a great thing," she says. "The paparazzi park outside Café Gratitude and everyone is dining on Kale and Juices just becoming part of this new culture. Any opportunity for veganism to be portrayed in a positive delicious light is beneficial."

Matt Ball, the Executive Director for Vegan Outreach, who has dedicated his life to spreading veganism, agrees. He says that the popularity of the trend is not only creating a better environment with more options for vegans but helps generate growth in the movement.

Vegan Outreach is a network of activists with the aim of increasing veganism both domestically and abroad. Since the 1960s the organization has relied on volunteers to distribute pamphlets and spread information about factory farming, animal rights, and environmental detriments of a carnivorous lifestyle. Ball reports that the organization has recently distributed its 20 millionth advocacy booklet and is on pace to distribute 3 million more by the end of the year.

"Our target audience are younger people," he says. "They tend to be more open minded than the general public and too you can reach them in large numbers on college campuses or at concerts, and they have a lot more meals ahead of them in the future."

According to the Humane Society, meat production in the US has sharply declined over the past two years and Ball attributes this decline to awareness created by Vegan Outreach and organizations like it.

Because of their success in the States, Vegan Outreach has now extended its sights internationally. Information booklets are now being printed in a variety of languages and for the past two years representatives from San Francisco have traveled to Mexico to campaign at colleges.

Not everyone is pleased with the shift, however. Facebook groups and tumblr pages host anti-vegan rants and meat-eaters who do not want to feel pressured are starting to push back. Let Them Eat Meat, a blog run by writer and producer Rhys Southan, attempts to highlight the ethical flaws in outreach arguments and hosts a lively debate in its comment section.

Southan speaks from his own experience. He was vegan for nine years, but he says he had to give up the lifestyle for health reasons. "By the end of it I was feeling kind of weak, chronically tired, and depressed, and I had brain fog--my thinking was kind of slow and I always felt kind of out of it," he says. He attributes the rise in popularity and the ease of dissemination to the cohesive identity and feelings of community veganism creates. The social aspect of the lifestyle fosters what he calls a belief function that acts in the same way religions do.

"I think it is more of a belief system than any other diet I can think of," he says. "That brings all sorts of other issues that the other diets don't have." He hopes his blog will expose the holes in the vegan argument so vegans can accept that those who no longer embrace the lifestyle are still good people. "My blog has upset people at times but my goal is to try to make it harder to be upset about these issues."

Despite the potential issues that may arise from veganism, it has been embraced by Angelinos and is not going away anytime soon. Restaurants throughout the city provide an array of vegan options and, if those waiting at Native Foods are any indication, restaurant goers are eager to try it. In places like LA you can get great vegan food in so many spots," Hollard says. "If you want vegan ice cream, vegan French crepes, you want high end vegan, you want to go to a pub and dine on vegan fare--it is really more available than ever. It is really a great time to go vegan."