NEW YORK -- The bombs that killed at least 23 people at the Iranian Embassy in Beirut on Tuesday provide the latest evidence that Syria’s civil war is rapidly becoming Lebanon’s war as well.

As the violence of the Syrian civil war has accelerated over the past year, Lebanon has been drawn closer to the conflict. The country of only 4.5 million citizens has absorbed around 800,000 refugees from Syria, according to the United Nations. Hezbollah, the Lebanese Shiite party that is closely allied with Iran and Syria, has become a major force on the battlefield, sending thousands of fighters to aid Syrian President Bashar al-Assad.

While that involvement initially emerged largely in secret, Hezbollah has become increasingly public about its role in the war, making itself an ever-larger target for the wrath of rebel forces aiming to end Assad’s rule.

Since the summer, such forces have threatened to attack targets in Shiite areas of Lebanon, noted Phillip Smyth, a researcher at the University of Maryland who focuses on Hezbollah. He saw Tuesday's deadly explosion in Beirut as a sign that such threats have now become reality.

“It was a long time coming,” Smyth said.

Hezbollah security forces have blocked previous attempts to hit Shiite areas, according to Smyth. But if Tuesday's bombings were the culmination of a long series of attempts, the timing did not appear accidental: The bombs hit just as Hezbollah finds itself aiding a nationwide offensive within Syria. Not least, Hezbollah is pressing to help capture the strategically significant town of Qalamoun.

Lying close to Lebanon, Qalamoun straddles a key artery: the road from the capital of Damascus to Homs, Syria’s third-largest city. Rebel groups currently hold the town, allowing them to block the regime from moving troops and supplies toward Homs and extending their areas of control.

Experts said they view the attack on the Iranian embassy as part of a broader attempt by Sunni forces to blunt Hezbollah's momentum in Syria.

"If you want to win the war in Syria and capture Damascus, you have to hit Syrian allies," said Joshua Landis, director of the Center for Middle East Studies at the University of Oklahoma. "This is an international war now."

The bombings, along with an increase in border violence, raise worries that Lebanon may become a full-fledged front of the war.

"It makes everybody anxious that this is just the beginning and this war is going to broaden," Landis said. "That’s the anxiety."

And outside of Syria and Lebanon, there is a chance that such attacks will cause even more damage. "If anybody was planning on peace talks," Smyth said, "good luck with those now." 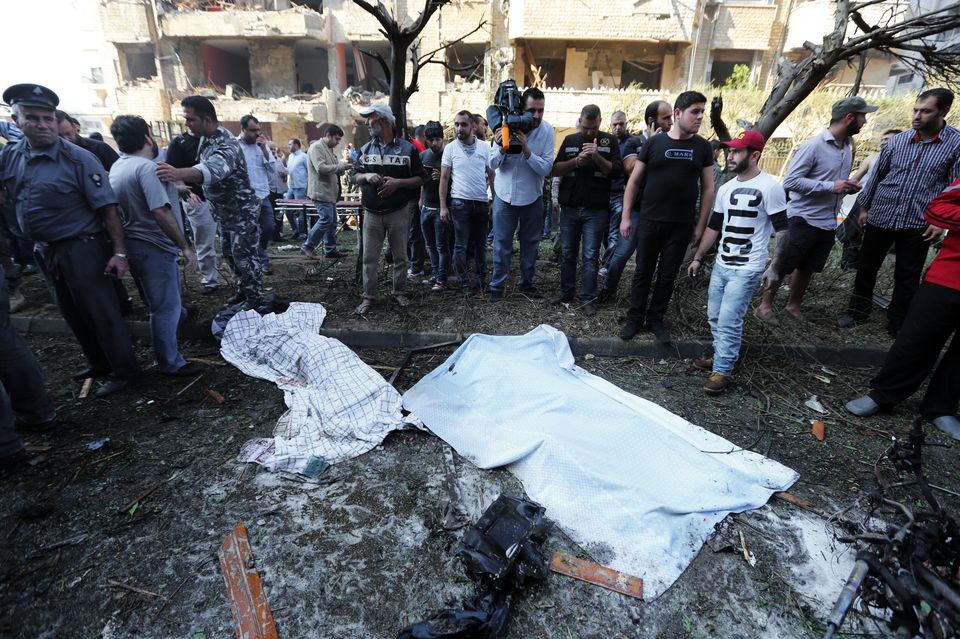 1 / 23
Lebanese people, gather around two dead bodies at the scene where two explosions have struck near the Iranian Embassy killing many, in Beirut, Lebanon, Tuesday, Nov. 19, 2013. (AP Photo/Bilal Hussein)
AP