By Oliver Holmes and Mariam Karouny

BEIRUT, Oct 19 (Reuters) - A huge car bomb that exploded in central Beirut during rush hour on Friday killed a top security official and seven others, wounded about 80 and heightened fears that Syria's war is aggravating tensions in Lebanon.

Among the victims was Wissam al-Hassan, who was in charge of a top intelligence unit, Lebanon's al-Jadeed television said. He had led an investigation that uncovered a recent bomb plot that led to the arrest of a pro-Syrian Lebanese politician.

Analysts said the bombing, which was reminiscent of grim scenes from Lebanon's own 1975-1990 civil war, was linked to the heightened tension between Lebanese factions on opposite sides of the conflict in neighbouring Syria.

The explosion ripped through the street where the office of the anti-Damascus Christian Phalange Party is located near Sassine Square in Ashrafiyeh, a mostly Christian area.

Phalange leader Sami al-Gemayel, a staunch opponent of Syrian President Bashar al-Assad and a member of parliament, condemned the attack.

"Let the state protect the citizens. We will not accept any procrastination in this matter, we cannot continue like that. We have been warning for a year. Enough," said Gemayel, whose brother was assassinated in November 2006.

The war in Syria, which has killed 30,000 people in the past 19 months, has pitted mostly Sunni insurgents against Assad, who is from the Alawite sect linked to Shi'ite Islam.

Lebanon's religious communities are divided between those supporting Assad and those backing the rebels trying to overthrow him.

The blast occurred during rush hour, when many parents were picking up children from school, and sent black smoke billowing into the sky.

Several cars were destroyed and the front of a multi-storey building was badly damaged, with tangled wires and metal railings crashing to the ground.

In the aftermath, residents ran about in panic looking for relatives while others helped carry the wounded to ambulances. Security forces blanketed the area.

In scenes reminiscent of the dark days of the Lebanese civil war, ambulances ferried the wounded to several hospitals, where doctors, nurses and students waited for casualties at the doors. At one, an elderly woman sat in the emergency room with blood staining her blouse.

The hospitals put out an appeal for blood donations.

An employee of a bank on the street pointed to the blown-out windows of his building.

"Some people were wounded from my bank. I think it was a car bomb. The whole car jumped five floors into the air," he said.

Michael Fish, 25, a British musician visiting Beirut, said he was in his hotel a street away when the explosion happened.

"At first I thought it was an earthquake. It shook the whole hotel for a second."

Lebanese Prime Minister Najib Mikati said in a statement that the government was trying to find out who carried out the attack and said those responsible would be punished.

The prospect that Syria's war might spread to Lebanon has worried many people here and fighting broke out in February between supporters and opponents of Assad in the northern city of Tripoli.

Syria has played a major role in Lebanese politics, siding with different factions during the civil war. It deployed troops in Beirut and parts of the country during the war and they stayed until 2005.

In Damascus, Syrian Information Minister Omran al-Zoabie told reporters: "We condemn this terrorist explosion and all these explosions wherever they happen. Nothing justifies them."

Tension between Sunnis, Shi'ites and Christians in Lebanon has continued after the civil war but has increased with the Syria conflict erupted.

"CANNOT BE ISOLATED FROM SYRIA"

Nabil Boumonsef, a columnist at the Lebanese newspaper An-Nahar, said: "They warned of the implications of the Syrian crisis and here it comes. Who did it and why nobody knows but what is certain is that it cannot be isolated from what is happening in Syria."

"The explosion shows that Lebanon cannot be safe and peaceful in the middle of this situation boiling around it."

He hoped the bombing did not mark the start of a new era of such attacks.

"The regional conflagration of course will have its implications on the Lebanese scene. They are dragging in Lebanon so that it becomes a conflict arena," he told Reuters.

Sunni-Shi'te rivalry hit a peak when former Prime Minister Rafik al-Hariri, a Sunni, was killed in 2005. Hariri supporters accused Syria and then Hezbollah of killing him - a charge they both deny. An international tribunal accused several Hezbollah members of involvement in the murder.

Hezbollah's political opponents, who have for months accused it of aiding Assad's forces, have warned that its involvement in Syria could reignite the sectarian tension of the civil war.

Sarkis Naoum, a columnist on Syrian affairs at an-Nahar said: "This is all interlinked to the sectarian and political conflict, and the conflict among intelligence services in the region. The aim of this is to spoil things."

Bombings were a hallmark of the civil war but the last such attack in Beirut was in 2008 when three people were killed in an explosion which damaged a U.S. diplomatic car.

Beirut has undergone massive reconstruction to repair the damage from the civil war and in recent years has enjoyed a tourist boom, boosted by Beirut's pulsating nightlife. That is now also under threat.

Al-Hassan was among at least eight people killed. The bomb wounded dozens of other, sheared the balconies off apartment buildings and sent bloodied residents staggering into the streets in the most serious blast the Lebanese capital has seen in more than four years. 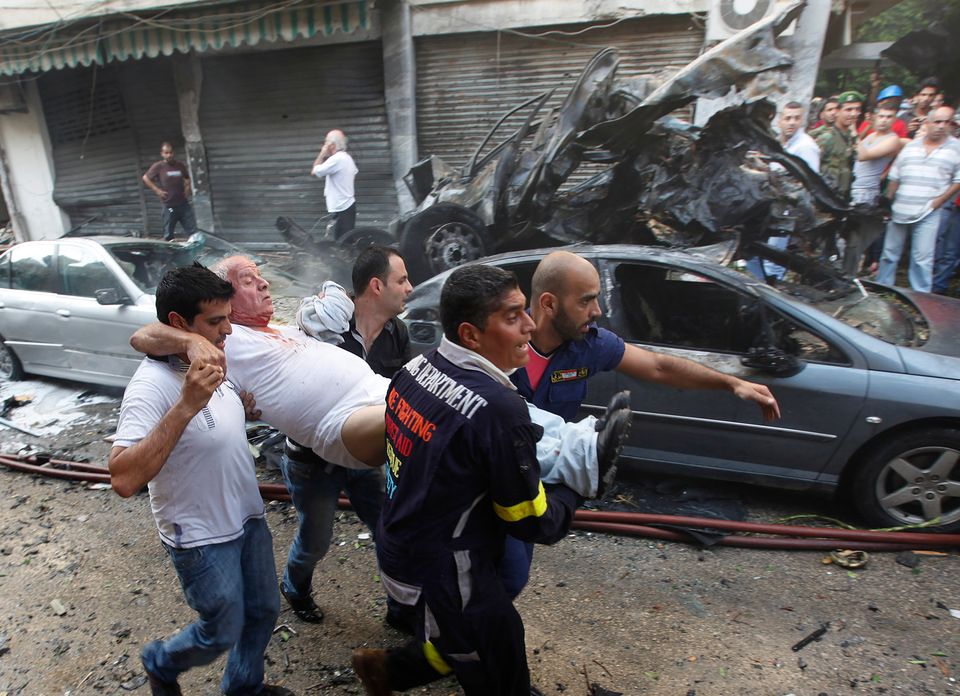 1 / 65
Mideast
Lebanese rescue workers and civilians carry an injured man, from the scene of an explosion in the mostly Christian neighborhood of Achrafiyeh, Beirut, Lebanon, Friday Oct. 19, 2012. Lebanese Red Cross and security officials say a car bomb in east Beirut has killed at least eight people and wounded dozens in the worst blast the city has seen in years, coming at a time when Lebanon has seen a rise in tension and eruptions of clashes stemming from the civil war in neighboring Syria. (AP Photo/Hussein Malla)
AP