In what's been hailed as one of the first cases of its kind, a Belarusian gay man tied the knot with his American partner in Washington, D.C. and will be allowed to stay in the country.

Radio Free Europe/Radio Liberty has an exclusive report on the marriage of Vyachaslau Bortnik, 39, a rights activist from the city of Homel, and Shawn Gaylord, 44, a U.S. lawyer and adviser for a gay advocacy organization. The couple married in a D.C. ceremony on July 11, according to the report.

In the wake of the U.S. Supreme Court's June 26 decision to overturn the Defense of Marriage Act (DOMA), Bortnik will not only be allowed to stay in the U.S., but is also now on track to become an American citizen within the next five years.

Check out a photo of the wedding, courtesy of RFE/RL, then scroll down to keep reading: 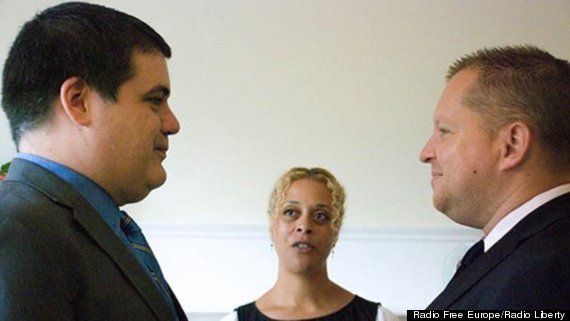 It's a particularly noteworthy move as rights for lesbian, gay, bisexual and transgender (LGBT) citizens are still extremely limited in Bortnik's native Belarus, which is frequently described as "Europe's last dictatorship."

"The situation is completely different in Belarus," Bortnik tells RFE/RL's Richard Solash. "No matter if it's a remote area or the capital or a regional center -- opinion polls unfortunately show that homophobia is prevalent in Belarus. I certainly do not believe that Belarus would enable such things as same-sex marriage anytime soon."

You can check out Solash's full report here.

1 / 101
WASHINGTON, DC - JUNE 26: Married couple Michael Knaapen (L) amd John Becker (2nd L) react after hearing the U.S. Supreme Court ruled that the Defense of Marriage Act (DOMA) is unconstitutional at the Supreme Court, June 26, 2013 in Washington, DC. The high court ruled to strike down DOMA and determined the California's proposition 8 ban on same-sex marriage was not properly before them, declining to overturn the lower court's striking down of the law. (Photo by Mark Wilson/Getty Images)
Getty Images