As world leaders gather for the fourth nuclear security summit this week, in the aftermath of the horrifying terrorist attacks in Brussels, it seems likely that Belgian Prime Minister Charles Michel will have more to say than anyone else -- both about real nuclear terrorist dangers and about real steps taken to improve nuclear security.

Since the 2014 summit, Belgium has suffered a number of suspicious and alarming activities at its nuclear sites and against some of its nuclear technicians. In Aug. 2014, for example, someone with inside access at the Doel-4 nuclear reactor drained the lubricant for the reactor turbine, causing it to overheat and resulting in an estimated $100-$200 million in damage. The perpetrator and the motive remain unknown.

In Nov. 2015, Belgian police discovered that the terror cell that carried out the Paris attacks used a secret video camera to monitor an official at nuclear research sites with a wide range of nuclear and radiological materials, including enough highly enriched uranium for several nuclear bombs.

In response to what seemed to be a growing terrorist threat to the country's nuclear infrastructure, the authorities beefed up protection against insider threats, toughened access control, deployed armed troops to protect reactors and, following the airport and subway attacks, removed all non-essential personnel from nuclear sites in order to reduce the number of potential insiders.

With a variety of different takes on these events swirling in recent news stories (see here and here), it's worth clarifying what we know and what is still unknown about the scale of this threat and how best Belgium -- and the rest of Europe -- can protect itself. (A just-released Harvard study also has details up through February.)

What was the video monitoring of a nuclear official about?

The short answer is that we don't know yet -- though sustained monitoring of a nuclear expert may be the most troubling indicator yet of nuclear intent from the so-called Islamic State. Belgian terrorists recorded about 10 hours of video of a nuclear official at Belgium's SCK-CEN research facility, near the town of Mol. As the Times story reports, Belgian authorities believe the hidden video camera was picked up by Ibrahim and Khalid el-Bakraoui, brothers who are believed to have later been suicide bombers in the Brussels attacks. They reportedly delivered it to Mohammed Bakkali, now under arrest, who is accused of helping with logistics for the Paris attacks. 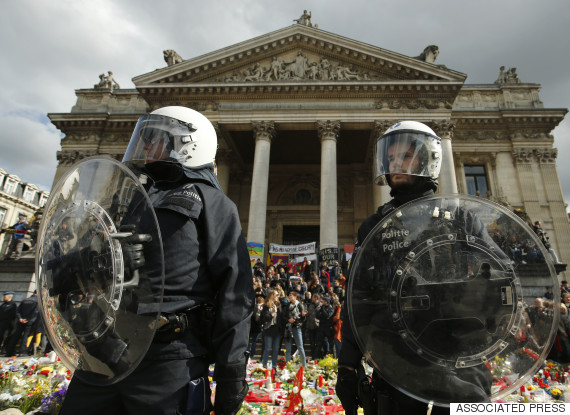 Brussels police in riot gear protect one of the memorials to the victims of the recent terrorist attacks on March 27. (AP Photo/Alastair Grant)

Several media accounts have suggested the terrorists might have been after radiological material for a "dirty bomb" from SCK-CEN. This seems unlikely (unless they were confused, as is certainly possible) -- radiological materials are available in many locations where they would be much easier to steal, like in hospitals and industrial sites. (The Nuclear Threat Initiative has a very good new report on the dirty bomb threat and steps to address it.) The Times story quotes me as seemingly worrying about Cs-137 from SCK-CEN; what I was actually saying is that Cs-137 is a big concern, and in many places it is much less well protected than at SCK-CEN.

The Times story largely dismissed -- wrongly, in my view -- the idea that the HEU at SCK-CEN might have been the terrorists' ultimate objective, saying that the idea that terrorists could get such material and make a crude nuclear bomb "seems far-fetched to many experts." Unfortunately, as we document in detail in our recent report, repeated government studies, in the United States and elsewhere, have concluded that this is not far-fetched -- that it is quite plausible that a sophisticated terrorist group could make a nuclear bomb if they got the needed nuclear material. As a 1977 Office of Technology Assessment study put it:

A small group of people, none of whom have ever had access to the classified literature, could possibly design and build a crude nuclear explosive device ... Only modest machine-shop facilities that could be contracted for without arousing suspicion would be required.

Of course, just because the terrorists could find and monitor a nuclear official's home does not mean they could have broken in to SCK-CEN and gotten HEU or anything else. What did they think they could accomplish with this monitoring? One obvious possibility is that they envisioned either kidnapping the official or kidnapping his family to coerce him into helping them carry out whatever plot they had in mind. Such coercion is a frequent criminal and terrorist tactic. Breaking into a nuclear facility is not as simple as kidnapping someone. But a kidnapping might well contribute to a more complex plot.

Did the Belgian bombers first plan to attack nuclear facilities?

If the Belgian suicide bombers were the ones monitoring the nuclear official, it's possible they first planned to attack the country's nuclear infrastructure. They may have shifted to the airport when their plans were accelerated by the arrests of co-conspirators, or because of Belgium's deployment of armed troops to guard its nuclear facilities. But a spokesman at the Belgian Federal Agency for Nuclear Control told the Washington Post that they "knew nothing" of any such a plot, and Belgian federal prosecutors have not confirmed any such plot. 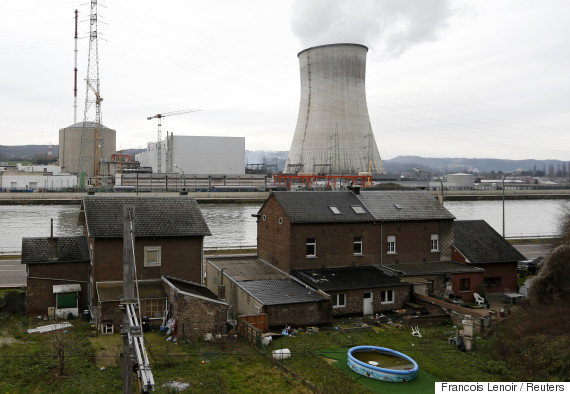 A house opposite the Tihange nuclear plant in Belgium on Dec. 29, 2015. (REUTERS/Francois Lenoir)

Press accounts of the possibility the terrorists were planning some kind of an attack on nuclear facilities have unduly played down the potential dangers of reactor sabotage. A story in The New York Times, for example, quotes an argument that the TATP explosive the terrorists were using would not get through the steel pressure vessel of a nuclear reactor.

It is certainly true that to cause a major radioactive release, terrorists would have to understand how to overcome a number of different safety and security systems. Getting into a power plant with a suicide vest of explosives would not be enough. But as Fukushima made clear, cutting off a reactor's electricity and cooling water can cause a disaster that can provoke widespread panic and cause devastating disruption and economic losses.

The sabotage at Doel-4 in 2014 also remains a mystery. By sabotaging the turbine (in a non-nuclear part of the plant), the perpetrator caused serious economic damage -- but there was never any chance of a radioactive release. Was this a terrorist incident? A disgruntled worker? Something else?

The bare facts are these. In August 2014, an insider at the plant opened a locked valve and allowed all the lubricant for the reactor turbine to drain out, causing the turbine to overheat and destroy itself. The reactor was down for months. Total damage was in the range of $100-$200 million, making it one of the biggest economic sabotage incidents of all time. Investigators have yet to find the culprit -- who may still be on staff.

A radical extremist in vital areas

As investigators were looking into the 2014 sabotage, they found that almost two years before, a contractor employee at the plant named Ilyass Boughalab had left to go fight for terrorists in Syria. He was later convicted in absentia of participating in the Sharia4Belgium terrorist group. He had passed a security investigation in 2009 to get clearance for access to the "vital areas" of the reactor -- the places where equipment whose sabotage could cause a major disaster is located. 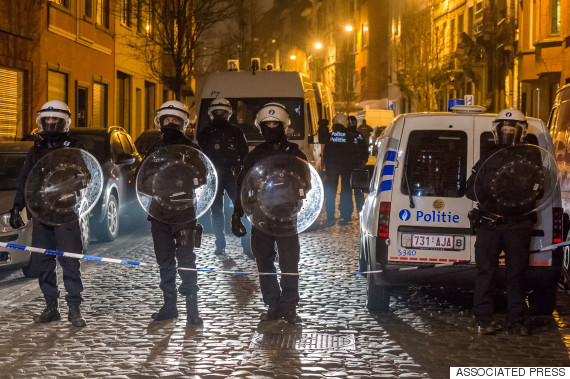 Police officers during a raid in the Molenbeek neighborhood of Brussels on March 18. (AP Photo/Geert Vanden Wijngaert)

His main job was inspecting the quality of welds. His family reportedly asserts that he was radicalized after the background check -- but the police chief in the town he grew up in has been quoted as saying he had an extensive criminal record (including assault and battery charges) before getting the clearance, raising questions about how careful the investigation was.

One interesting element of the Times story is that it refers to two jihadists having been employed at this facility. The other was likely Elias Taketloune, accused of having been the person who radicalized Boughalab and who was also tried in the Sharia4Belgium trial. I have not yet seen any public confirmation that he worked at Doel-4 with Boughalab.

In December 2014, after the August sabotage, Belgium's Federal Agency for Nuclear Control imposed new regulations substantially strengthening protection against insider threats. Then, after the Brussels airport and subway attacks, Belgium withdrew non-essential personnel from its nuclear facilities. This significantly reduced the number of personnel at these sites, reducing the chance that there might be a malevolent insider among them. They also added new rules on security cameras and use of two-person rule in sensitive areas. Moreover, Belgian authorities reportedly withdrew access passes for at least four workers at nuclear facilities in the days after the attacks.

Following the Paris attacks, the revelation of terrorist rings in Brussels and the monitoring of the Belgian nuclear official, Belgium decided to deploy armed troops to guard its nuclear facilities. (A specialized guard force will be trained and deployed in the coming months.)

Two days after the airport and subway terrorist attacks, with armed guards newly deployed at Belgium's nuclear facilities, a security guard at one site was murdered. The dead man worked at a radioactive materials facility, not a power reactor. Prosecutors have denied early reports that the guard's security pass had been stolen, and are playing down any militant link. Still, in a country with one of the world's lowest murder rates -- only about 200 murders occur in Belgium each year -- it is a surprising coincidence.

Previously, Belgium had no armed guards at all at its nuclear facilities, relying instead on response forces a few minutes away. U.S. officials had long criticized Belgium on this and other aspects of nuclear security; the Center for Public Integrity reported on an incident in the mid-2000s in which the United States became so concerned that it threatened to cut off further nuclear supply to Belgium. 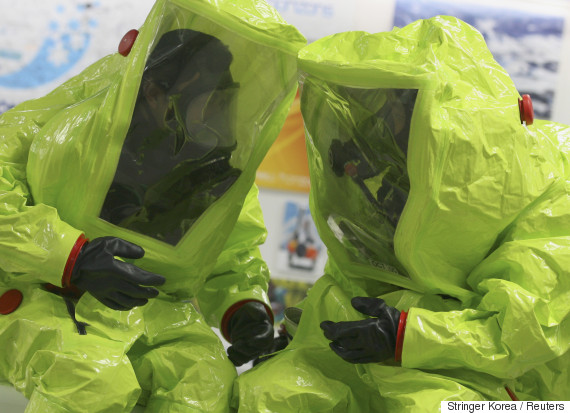 Police officers talk during an anti-terrorism drill on March 20, 2012, held in a preparation for the Seoul Nuclear Security Summit. (REUTERS/Lee Myung-ik)

While there are important unanswered questions about each of these incidents, all told they offer troubling suggestions that ISIS is pursuing nuclear or radiological attacks. Ultimately, the group envisions a total war between the "crusader forces" and itself; winning a total war with a nuclear-armed superpower would presumably require very powerful weapons.

Fortunately, as Belgium has shown, there are clear actions that can drastically reduce the risk. At this week's summit, the assembled leaders must take action to ensure that all nuclear weapons and weapons-usable nuclear materials worldwide are effectively and sustainably secured against the full spectrum of threats terrorists and criminals might pose.

Major nuclear facilities, similarly, must be protected from sabotage. And radiological sources must be protected, tracked throughout their life and, where possible, replaced with less dangerous technologies. The world needs to act to ensure that ISIS can never get its hands on the ingredients of nuclear terror.