Have you heard the story about the Muslim community in Belgium that raised money to restore a local synagogue?

Probably not. But it is really important that you do.

The story was first brought to my attention by my colleagues at HuffPost Germany who reported that the oldest Jewish house of worship in Belgium, Synagogue d'Arlon, had been forced to close its doors because of structural problems with the building.

When word went out that the Jewish congregation was short of the funds needed to re-open, a local Muslim community took it upon themselves to call for donations at Friday prayer -- even though they themselves do not have a permanent mosque and pray in a converted house.

The movement to help their Jewish neighbors then spread to Muslims across Belgium who contributed to the fund. In a communiqué released by the Association of Muslims of Arlon (AMA), Hajib el-Hajjaji urged fellow Muslims to contribute: "It is important to save this synagogue for the families and children who find comfort and fraternity there. The Jewish community needs support to live fully -- like all other faiths -- in full freedom, security and comfort."

I asked Mohamed Bouezmarni, the General Secretary of AMA about the gesture. He wrote back, saying: "We were very touched by the call of Rabbi Jacob. Since the synagogue closing, he has considered himself a 'wandering Jew.' This precarious situation we know well also, since we do not have a real mosque to our offices."

The Muslim community ended up raising 2,400 Euro (about 2,600 dollars), which they presented to Rabbi Jacobs at an emotional roundtable discussion on the theme of "Living Together" where they were joined by other religious and secular leaders from the city. 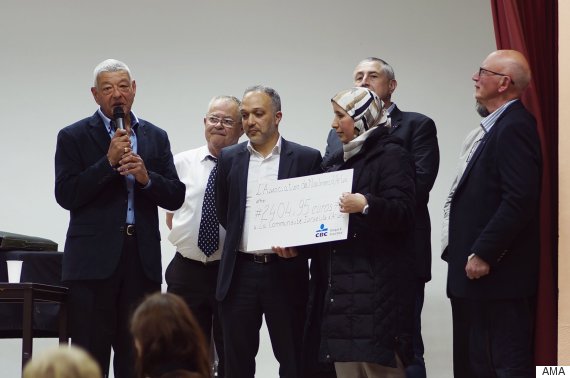 "It has strengthened ties for sure" Rabbi Jacob explained. "And I think that at the synagogue, we have a different view of this community."

Ultimately it was not about the money, but about "a much larger project," Bouezmarni explained:

"Jews and Muslims have lived together for centuries. Do you know that the first hydraulic clock was invented by a Jew so that Muslims can observe prayer times? Imams in France protected Jews during war. It is regrettable that religions are used for political purposes and sow discord between men."

Unfortunately, as we all know, this peaceful existence can be fragile and too easily shattered. We are living in dangerous times when we are closely connected by technology but too often living in silos that keep us apart. We cannot ignore the rising anti-Semitism, Islamophobia, oppression of Christians in the Middle East, and persecution of atheists in many countries around the world, to name just a few examples.

There are real conflicts in the world that require creative and compassionate solutions in order to provide justice and restore dignity to people on all sides. Yet there is a minority of humanity, from all religious traditions, that is choosing destruction instead of construction, succumbing to fear and seeking meaning through blanket distrust and even violence towards the "other."

Conflicts between faiths, and even within faiths, require extra vigilance and bravery on the part of those called to peacemaking. It sometimes requires that we take a stand against people from our own traditions who are calling for hostility and instead demonstrate another way.

This intentional peacemaking is happening all around the globe. People have responded to threats against their neighbors by forming circles of protection. A few examples include Muslims protecting synagogues in Oslo, Norway and in Copenhagen, Denmark; Christians and Jews protecting a mosque in Cincinnati; and Muslims encircling a church in Pakistan. We have seen cathedral lights being dimmed in Germany in protest of an Islamophobic march; and Hindus and Muslims finding innovative ways to live together in harmony in Pakistan.

These are just a few important examples of women and men who are standing up and insisting that peace is possible when we take a stand across lines that might divide us. We need even more of this, and we need to celebrate and promote the exemplary stories of peace that often get passed over for the stories of conflict.

As religion is a global topic, HuffPost's editors around the world are focused on lifting up stories that feature courageous people from all (and no) faith traditions who are using the power of spirituality and philosophy to create peace. If you are involved in a peace-making activity, please tweet me at @raushenbush as I would love to hear from you and celebrate the work you or your community are doing.

Show the world that it is possible to heal the wounds and create a more peaceful world. Let's start now.