BRUSSELS, March 26 (Reuters) - Belgian prosecutors charged three men on Saturday with terrorist offenses over the Brussels bomb attacks and authorities called off a planned 'march against fear' in the jittery capital to relieve pressure on an over-taxed police force.

The suicide bomb attacks targeting Brussels airport and a rush-hour metro train on Tuesday killed 31 people, including three of the attackers, and injured hundreds more. Islamic State has claimed responsibility.

American Justin Shults was confirmed to be among the victims by his employer and a relative on Saturday. The 30-year-old, originally from Tennessee, moved to Belgium in 2014 with his wife Stephanie, who is still missing.

Amid increasing signs that the attacks were carried out by the same militant network that was behind bombings and shootings in Paris last November that killed 130 people, German lawmakers said Europe urgently needed to improve the way its security agencies share information.

Officials said 24 victims from nine different nationalities had been identified so far from the attacks in Brussels, which is the headquarters of both the European Union and NATO. Four people remain unidentified.

Of the three men charged on Saturday, Belgian prosecutors named one as Faycal C. Belgian media identified him as Faycal Cheffou and said he was the man wearing a hat and a light-colored jacket in last Tuesday's airport CCTV footage that showed three men pushing baggage trolleys bearing luggage.

The two others in the picture are believed to have blown themselves up.

Cheffou was charged with taking part in the activities of a terrorist group, and actual and attempted terrorist murder.

The other two charged on Saturday, Aboubakar A. and Rabah N., were accused of terrorist activities and membership of a terrorist group.

Rabah N. was wanted in connection with a related raid in France this week that authorities say foiled an apparent attack plot.

Brussels mayor Yvan Mayeur told Le Soir newspaper that Cheffou, who said he was a freelance journalist, was "dangerous" and that he had been detained a number of times at a park where he sought to encourage asylum seekers camped there to turn to radical extremism.

The authorities also said that a man arrested on Friday after being shot in the leg at a tram stop in the Brussels district of Schaerbeek was being held for a further 24 hours.

He was identified as Abderamane A. and was one of three people arrested on Friday.

That operation was linked to the arrest in Paris on Thursday of an Islamist convicted in Belgium last year and suspected of plotting a new attack, Belgian prosecutors said.

With Brussels still on high alert, organizers called off a "march against fear" planned for Sunday after officials including the city's mayor urged people to stay away in order to spare the over-taxed police force.

"The security of our citizens is an absolute priority," said march organizer Emmanuel Foulon.

"We totally agree with the authorities' request to delay this plan for a later date. We in turn ask citizens not to come to Brussels this Sunday."

Highlighting the jittery national mood, the murder this week of a security guard employed at a site in Belgium holding radioactive materials has stoked debate about the risks of militants attempting some kind of nuclear attack.

On Saturday prosecutors denied media reports that the security guard had had his access badge stolen and the implication it could have been a motive for his murder.

On Thursday, French language newspaper DH (Derniere Heure) had reported the suicide bombers who blew themselves up on Tuesday originally considered targeting a nuclear site, but a series of arrests of suspect militants forced them to speed up their plans and instead switch focus to Brussels.

Late last year, investigators found a video tracking the movements of a man linked to Belgium's nuclear industry during a search of a flat as part of investigations into the Islamist militant attacks on Paris on Nov. 13.

In a gesture of solidarity with Brussels on Saturday, the Lebanese capital Beirut - itself often the target of bombings - lit up one of its landmarks in the colors of the Belgian flag.

"We say to everyone, quite simply, that life must triumph over death," Beirut governor Ziyad Chebib said.

Belgium Charges Three Suspects With Terrorism
How To Help Brussels 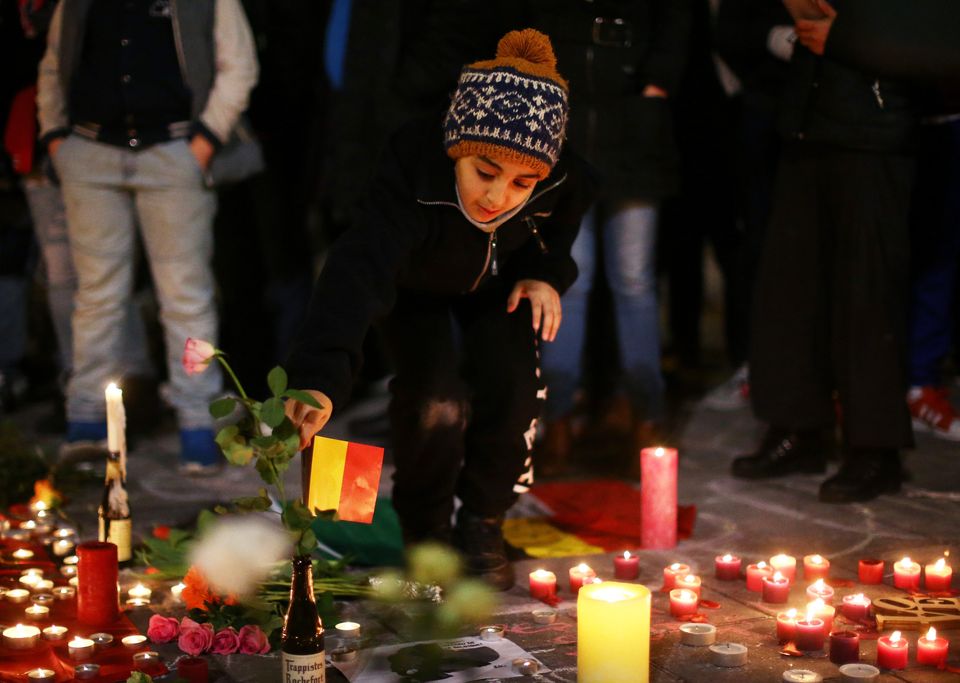