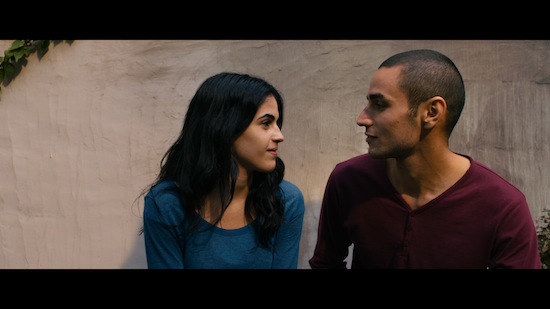 It is said that a great film should make you walk out of the cinema feeling like a better person. But with his latest oeuvre Omar, Palestinian filmmaker Hany Abu-Assad made me want to be a better person.

Omar also left me yearning for a world where I wouldn't form a preconceived opinion of a character based on his nationality, where neighbors would not be separated by walls built by governments and where the young and hopeful wouldn't be penalized for being what makes them perfectly human -- young and hopeful.

The most brilliant aspect of Abu-Assad's masterpiece -- a word thrown around a lot in conversations all around Cannes after its world premiere in the "Un Certain Regard" section, but also how Omar star Adam Bakri perfectly sums up the film -- is the intentionally blurred line that divides good from evil, present within every richly constructed character in Abu-Assad's original story. While real life is always lived in varied shades of grey, I find most filmmakers shy away from the complex challenges constructing such human characters would create within a script.

Of course, sitting across from Abu-Assad, one quickly realizes he is unlike most filmmakers, and that's why Omar is such a multi-layered, touching and wonderfully complex film. When I ask him to explain these complexities, his answer leaves me wanting to ask many, many more:

I discovered a long time ago that as human beings we are both good and bad within ourselves. And situations can make you a bad person or a good person. If you had a good education, good parents who will teach you values, your good traits will be the dominant ones, but if you are coming from a ghetto, your situation will force you to bring the bad side out, even if it's the same human being. When I discovered that, I felt it's not always honest the representation of characters in movies. Because in movies we would like to have a very clear idea of who is the bad guy and who is good. And most people want to see that, by the way. So I thought, ambiguity is not attractive for an audience in general but if you do it right, meaning you keep the audience emotionally involved, and entertain them, they will keep going with the story, wanting to find out what's going on."

Omar was filmed in Nablus, Nazareth and the jail scenes in Bisan, where Abu-Assad used an old building just outside the city because, in his words, "you can't shoot in a real jail from a security point of view."

As blurred as the lines of humanity are in Omar, the physical borders are clearly delineated by a wall -- a tremendous, intrusive, terrifyingly tall weapon of mass separation. It's a wall unlike the ones we are used to seeing on the news, because it wasn't built to separate the Palestinians from the Israelis, rather to keep apart neighbors, families and lovers, like Omar and his beloved Nadja (Leem Lubany). But this is like the walls that are the everyday reality of Palestinians, where most borders have been created to debilitate, not protect. Abu-Assad's elaborates, "if you look at the map of the walls they're dividing cities and villages, refugee camps and it doesn't matter which side you are on, it's just there, this wall dividing the same city."

Eyad Hourani, who plays Omar's friend Tarek in the film explains that as Palestinians "we are the same of any youth in the world," and continues, "we have friends, we love, we have a life but how can you manage your life and how to develop your dreams in this hard place?" When I ask him if there is a solution, he points out that yes, there is one but "not now, maybe the new generation can find a place to make it better. Though I don't know what is better, maybe everyone living his and her life, and enjoying it."

The handsome Adam Bakri, who comes from a great cinematic family (his father Mohammad and brother Saleh are both beloved stars) is less doubtful. When I ask him if there is a solution to the Palestinian struggle he admits, "I'm an optimistic guy and I think it's gonna happen one day. Something really, really, really great is gonna happen while I'm alive, and while my parents are alive." And about cinema helping to bridge the divide, he says "definitely, and I really hope this film is going to be seen all over the place, because it has such a strong message to humanity, and it deserves to be watched."

At the core of Omar, stands a connection between two men, two unlikely heroes full of faults and human traits. While I admit that I went into the film with some pretty well-defined allegiances -- a reader once commented on a piece I wrote "you can either be for Israel or against it," protesting my loyalty to the Palestinian cause -- the character of Rami, the Israeli agent assigned to Omar's case, left me torn. Mid-screening I scribbled in my notebook about him and Omar "two men who are clearly different from the rest" and today, more then twenty-four hours later, I'm still seduced by Rami's character, and the charismatic actor who plays him, Waleed F. Zuaiter.

When I ask how he played him, Zuaiter admits, "as an actor, I try to portray every character that I play with as much humanity, as many conflicting aspects of his personality." He continues, "to me there was nothing controversial about Rami, he's a good person with a very bad job."

Zuaiter is also a producer on Omar, because, as he puts it, "I read the script, I said I love the role of Rami but I'm head over heels in love with the script, and to do a Palestinian film is not easy." He continues, "Hany and I had a shared dream that we could get Palestinians to invest in the talent and the community and the filmmaking, because most Palestinian films are funded from European government funds or from abroad, and here we are." Ninety-five percent funded by Palestinian private investors, Omar also benefited from Enjaaz, the post-production fund of the Dubai International Film Festival which, in Zuaiter's words, "has been great, they are the type of organization we want to have on our side and they are affiliated with the film festival, so it's great."

Omar is a film that needs to be watched again and again, savored, discussed and then watched again. Abu-Assad calls it "an homage to Sydney Pollack's political thrillers" but is quick to point out that political discussions should be kept out of movies, where they can "become very boring."

While I believe that filmmakers would make the best politicians, Abu-Assad, devoid of all complexes of grandeur, doesn't think cinema can fix a bad situation -- in fact his exact answer is "no way!" -- because "politicians are responsible for fixing the future of our sons and daughters, not we, the artists." And in his devastatingly honest way concludes that "nowadays I feel that politicians have become failures, wherever they are."

Yet Omar touches on the great collective global soul that is so often left out of political discussions, laws and the media reports. My wish is for this film to reach the most hidden recesses of the world, the dark corners of the most inflexible minds, to teach a lesson or two in how we all just basically want to live and let live, love and be loved, and most of all, be understood.

Hany Abu-Assad's Omar has gone on to win the Jury Prize in the "Un Certain Regard" sidebar at Cannes.

Photo and film clip courtesy of Film Press Plus, used with permission