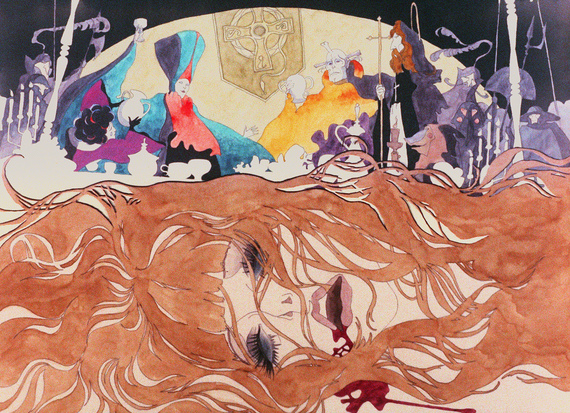 If you're like me, you grew up watching Astro Boy (1964) and Kimba the White Lion (1966) on TV--Japanese kiddie anime dubbed into English. What you probably didn't know is that director Eiichi Yamamoto also directed some decidedly non-kiddie fare for Mushi Production.

The Animerama series, as it was known, was a trio of animated films specifically targeted at an adult audience: A Thousand and One Nights (1969), Cleopatra (1970), and Belladonna of Sadness (1973). Cleopatra was marketed as the first X-rated animated film, although Fritz the Cat beat it by several months.

It's your basic rape-and-revenge story: A beautiful but chaste maiden is gang raped by an evil lord and his courtiers on her wedding night. To get revenge, she makes a pact with the Devil--who resembles a talking penis that gets larger and larger every time she encounters Him. (The Devil is voiced by Japanese acting great Tatsuya Nakadai.)

But pervs expecting your standard hentai--you know who you are--will be sorely disappointed. Urotsukidoji: Legend of the Overfiend (1989) this ain't.

First there's the artwork, by Kuni Fukai. Fukai drew more than 1000 images for the film, which took more than a year to complete. His style has more in common with Gustav Klimt and Peter Max than Ralph Bakshi and Robert Crumb.

Then there's the music, by composer Masahiko Satoh. Still active today, Satoh is an important figure in the Japanese avant-garde music scene. For Belladonna, he turned in a groovy pastiche of jazz, pop, rock, and psychedelia.

Finally, there are the themes--yes, Belladonna has themes. It's really about rebellion against government and religion, motifs that resonated with Japanese audiences in the turbulent 1970s. It's loosely based on La Sorcière by Jules Michelet, a sympathetic history of witchcraft published in France in the 19th century. Michelet argued that so-called "witches" were really protesting against feudalism and the Catholic church.

Mushi Production was a Japanese animation studio started by manga artist Osama Tezuka, the Japanese Walt Disney. Unfortunately, Belladonna wasn't a commercial success. It was too arty to provide wanking material for the raincoat crowd. Mushi Production went bankrupt that same year. The restoration of Belladonna is a major event for animation. See Belladonna now or be damned to perdition!

The Metrograph is located a 7 Ludlow St. in Manhattan.