When you hear Amherst, MA, band Bellas Bartok play their unique blend of folk, punk, and klezmer, it's easy to get lost in the atmosphere. The ensemble group draws the audience in with its visual theatricality and keeps their riveted attention with its sonic groove. 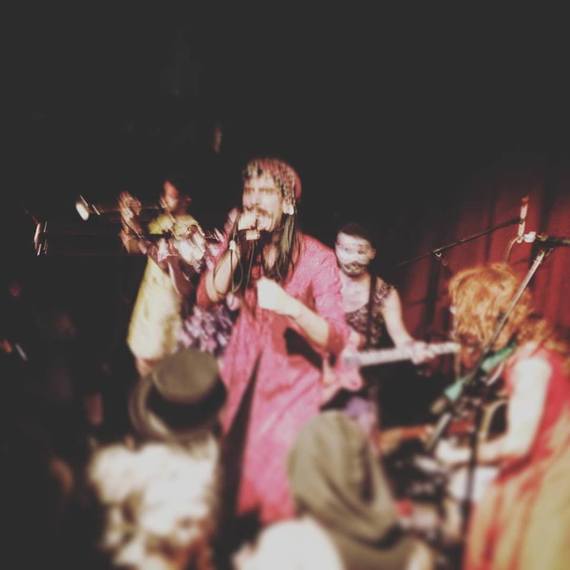 One of Bellas' older songs, "The Walking Dead" is a good primer for the band's eclectic musical and lyrical style. A foot stomping jam and a funeral march, the song touches on two main themes.

First, it draws influence from the eponymous comic book and tv show. The lyrics roughly follow some thematic elements from the story, as the narrator draws a herd of zombies to his "home":

The dead, don't do no walking alone
Just ahead, down the road
I'm leading them home

We shortly discover that the narrator is the early volume villain The Governor:

The second theme, Bellas frontman Asher Putnam told me, is "the fall out from an abrupt and tragic loss, and scoping your homies going through the motions of grief."

That theme is also on display in the song as a subtle thread weaving in and out of the dominant apocalyptic narrative."The Walking Dead" opens with a keening lament for both the pre-zombified world of the book's characters and a life before loss:

The Governor asks the audience if grief is natural for humanity, even as he separates himself from that emotion:

Were we born, made to suffer?
You made your call, I'll see no other

The rhythmic descent of the bassline and lowering chord sets is the perfect backdrop for the mournful singing that sets the mood for the piece.

Duality of message is prevalent in Bellas' lyrics.

In the accordion-led "Masquerade," the band intersperses a twenty-first century message of sex-positivity and tolerance with a nineteenth-century narrative of a drug-addicted prostitute, Magdalene, in plague-stricken Europe.

The story is easy to follow. The pimp tells Magdalene to:

And that work is necessary to provide a living to Magdalene's family. She has employment, and can't worry right now about the intricacies of plague society and those less fortunate than her:

Who's that feeding from grub on the bottom?
Leering from across the street
I can't afford to be philosophizing
When my children have no food to eat

It's easy to judge Magdalene for her choice of work, and Bellas makes sure you know that they know that's what you're doing:

I have no time, to be wasting
Defending what I am

As the vocals take the form of an observer, looking at Magdalene, the tone shifts. Now, the lyrics are an incredulous take on Magdalene's choice to work:

Can't you stop when you're breathing
And stop what you're thinking
And end this disgraceful charade?

When she could be bought easily:

However, our observer is only fooling himself- no amount of money will bring him what he really wants, Magdalene's love. Hence the song's last line, a forlorn lament:

Again, Bellas' lyrics are both a clear, upfront narrative and a subtextual reflection on deeper meaning."On it's surface this tune is about 19th century gender inequalities, poverty, and the horror of selling your body to eat at a difficult period of history," said Putnam, "The song has the intention of a sex positive message... and an end to sex shaming."

The dreamlike drone of the beginning of "The Strange Ones" gives way to celebratory horns and a fighting call for the unsung heroes of society. Unlike "The Walking Dead" and "Masquerade," "The Strange Ones" is very direct in its message.

Putnam: "This song is for and by weirdos. The ones forgotten by society and those worshiped by it."

The song's imagery is striking. We are introduced to the bizarre imagery of a naked old man running through the streets:

Age for the old man is nothing
Running through town, bones on skin
All is seen and all is his if he so desires

And as we watch him run past we live vicariously through him even if we are not brave enough to join him:

He does these things for us because we are no longer able to.

On the other end of the spectrum, a young girl rejects her societally assigned gender weakness:

She knows her future has been opened by our friend "dressed in skin" above:

An interesting facet of the lyrics to "The Strange Ones" is that the narrator is completely removed from the action, outside looking in. It's generational- the old man is the elder, released from convention and accountability; the girl is the child, full of potential but not responsibility; and the narrator is the adult, in between and unable to enjoy unaccountability, responsible for maintaining the structure for both ends of age.

So the narrator looks on at the old man and girl, and laments the lack of bravery in their soul:

Where is my spine?
What are all these things we must do?

While forgetting that the world they're holding in place will allow them to be the former while the latter stabilizes it in the future. The narrator's subconscious knows this and asks themselves how they cannot appreciate the beauty of life:

It's all here to inspire you/where's the inspiration? 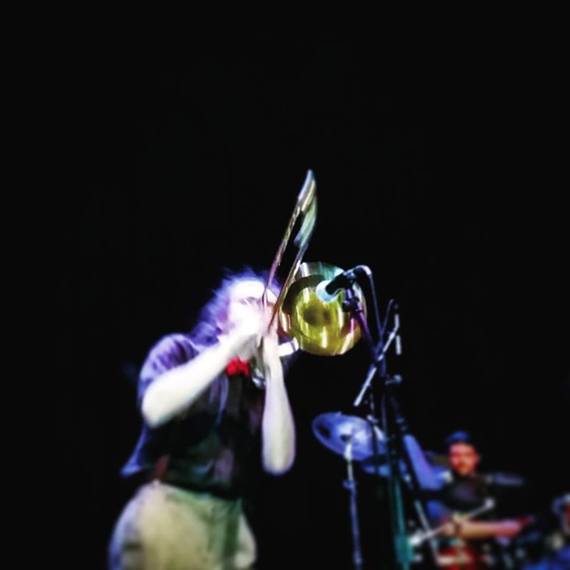 The band goes on tour for the summer May 7 through the Northeast and the Upper Midwest. Check them out.