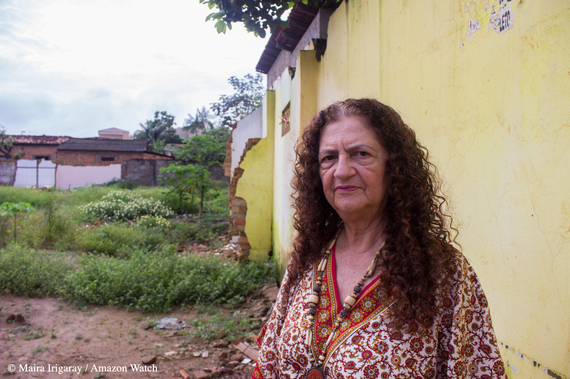 Today, May 5, Dilma Rouseff, President of Brazil inaugurated the Belo Monte Dam in the Brazilian Amazon, about five months after its first reservoirs began to fill.

The most important project of President Dilma Rousseff's energy program is also a monumental example of how energy should not be produced in the 21st century. In addition to its high price tag (nearly $9 billion USD), the dam is associated with corruption and massive human rights violations due to its social and environmental impacts.

Antonia's family was one of nearly 3,000 displaced by a dam that will gravely impact the lives of as many as 40,000 people, many of them indigenous. Although more than 2,600 homes have been provided to displaced families, they have come with complaints of structural defects, lack of public transportation, and absence of essential services. In addition, the homes are not connected to the sewer system, one of the conditions of the dam's license.

When complete, Belo Monte will be the third-largest dam in the world. Constructed in northwest Brazil, it will produce on average only a third of its maximum capacity. It is now flooding a 200-square-mile portion of the Amazon rainforest (roughly the size of Chicago), taking with it rich biodiversity, arable land and urban neighborhoods in the city of Altamira.

Since 2011, when construction began, various indigenous communities have suffered serious harms to their health, integrity, territory and culture. These have only worsened with the approach of the dam's operation. Public services, including health centers and childcare, have collapsed. Violence has grown exponentially: murders have doubled, traffic accidents have increased 144 percent, and sexual violence and prostitution have escalated, affecting children and adolescents. Citizen complaints are ignored.

Corruption has long enveloped Belo Monte. According to the confessions of executives from construction firms Camargo Correa and Andrade Gutiérrez, millions in bribes were paid for the project's construction. That issue is now part of the largest anti-corruption investigation in Brazil's history.

"The government and Brazilian society do not and will not tolerate corruption," said President Rousseff before the United Nations General Assembly last September. "Brazilian democracy is strengthened when authorities take the limit of the law as their own limit. Many of us fought for just that when our laws and rights were violated during the dictatorship." She also spoke of including "indigenous issues" in the country's climate commitments.

Rousseff's speech starkly contradicts reality. She may have been a victim of the dictator, but she now uses the resources of that regime to build Belo Monte. Brazil's Federal Public Ministry has presented more than 20 lawsuits against the project, and judges have ordered the suspension of its work on at least six occasions. Those rulings were annulled at the request of the Rousseff government by applying a legal instrument that was, ironically, created by the dictatorship.

On November 24, 2015, Brazil's environmental authority authorized the operation of Belo Monte--despite the project's failure to comply with vital socio-environmental conditions, and despite the fact that it ignored the opinions of environmental technicians and the authority for the protection of indigenous peoples.

The project was halted again in January, when the Federal Justice of Altamira suspended the filling of reservoirs for failure to comply with conditions mandating protection of indigenous communities. The ruling was overturned just weeks later.

For years, the impacts of Belo Monte have been denounced before the Inter-American Commission on Human Rights (IACHR) and the United Nations. Responses have been slow or non-existent. In April 2011, the Commission urged Brazil to suspend construction for the lack of free, prior and informed consent of indigenous communities.

Brazil's reaction was blunt: it withdrew its candidate to the Commission and its ambassador to the Organization of American States; withheld its annual contributions to the organism; and began a process of "strengthening" the Inter-American System, which ended up reforming the rules of the Commission.

In response, the Commission stopped requesting the suspension of works, and focused on requesting urgent actions to protect affected indigenous communities. In 2011, those affected communities brought a case against Brazil. Four years later, in December 2015, the Commission opened the case for processing. The Commission now has the power to prioritize the case, make a decision quickly, and prevent any further damage.

Brazil still has a chance to show that they care about human rights and the environment; and that the rules will be enforced and justice implemented.

The Commission and other authorities have the historic opportunity to demand respect for human rights, and help countries achieve development that does not come at the expense of people. But they must act soon, because Belo Monte was just inaugurated and its already causing dire impacts.

A Spanish language version of this post was originally published in El País.