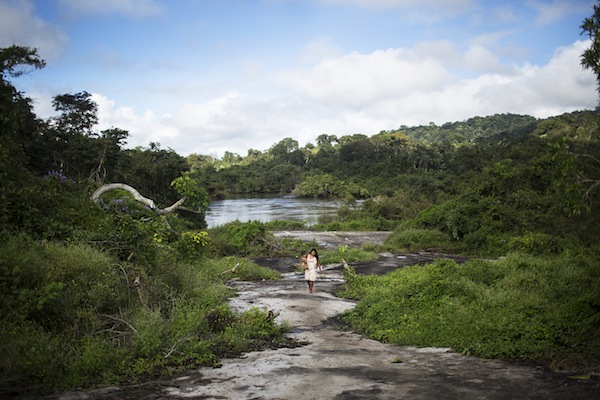 A Xikrin woman walks back to her village from the Bacaja River. (Photo courtesy of Taylor Weidman and the Vanishing Cultures Project.)

For over 20 years, the indigenous tribes of the Brazilian Amazon have protested the world's third-largest dam, the Belo Monte. In 1989, a gripping image captured just how seriously the Indians took the issue: a photo showed Tuíra, a woman warrior of the Kayapó tribe, threatening to slice the face of an engineer with her machete at a meeting between Indians and dam officials.

Today, 24 years after Tuíra showed the world that the dam was a matter of life-or-death for Brazilian Indians, Belo Monte is reaching peak construction on the Big Bend of the Xingu River. I interviewed the Xikrin, an indigenous tribe living just a few miles away from Belo Monte on the Bacaja River, a tributary of the Xingu, to see if 24 years was enough time for dam officials to meet their demands and assuage their fears. They said it wasn't.

"I think the dam will ruin everything," says Ngrenhkarati, a grandmother at the Xikrin village of Poti-Krô. She is skeptical of what representatives of Norte Energia, the consortium managing the dam, has told her tribe -- that the dam will have little impact on the Xikrin's environment.

"The engineers say the river won't dry all the way, that the water level will go down only a little," she says. But the water level is not the only impact of the dam -- Ngrenhkarati and others in her village have already witnessed decreased fish populations. The tribe is also weathering through negative impacts on their society: relationships among Xikrin villages are deteriorating. While some village leaders decide to accept compensation offers from Norte Energia, others continue to demand further consultation. The situation has bred feelings of ill will and betrayal among the villages. This is eroding the tribe's vibrant culture, says Mukuka, a leader of Poti-Krô village.

"[Norte Energia] started granting food and gas, and this caused infighting," Mukuka says. Although villagers still interact, the spirit of unity is gone. "We still talk, but it's not the same," he says.

"We Indians want to know, 'What will happen if the river dries up? Will you drag our canoes everywhere?'" Ngrenhkarati says. No one has an answer to her question. According to scientists, nobody -- not even Belo Monte's engineers -- know how the dam will affect the environment until the dam is completed and begins operation.

In the meantime, the Xikrin can only watch, wait, and hope that Norte Energia will make reparations for negative impacts on their life. But how can a company compensate for eroding culture?

"I would like our language and culture to be preserved, to not lose them as other people have," Mukuka says. The task, it seems, is up to them.