Ben Affleck will make a fine Batman. I've never thought differently about that since the announcement was made that Affleck will be playing Bruce Wayne in 2015's Batman vs. Superman. Now, I did write that I am confused about this decision from Affleck's standpoint. After all of the critical acclaim he's received in recent years -- culminating with Argo, a movie that he both directed and starred in, winning Best Picture earlier this year -- why in the world would he want to play Batman? I have a better grasp on this after watching Affleck in Runner Runner, of all things.

No one will ever convince me that Affleck isn't playing Jim Young from Boiler Room in Runner Runner. If you don't remember (if not, seriously, who are you?), Jim Young is the scenery-chewing recruiter/co-founder of the sketchy brokerage firm J.P. Marlin who is only in, maybe, seven minutes of the entire movie. But Affleck owns that movie like Alec Baldwin owns Glengarry Glen Ross. In Boiler Room, Affleck looks like he's having the absolute time of his life.

Seriously, watch Affleck give this monologue:

Actually, while you're at it, watch this one, too:

Look how much fun he's having. Again, after watching Runner Runner, I'm convinced Affleck is playing the exact same character. Oh, sure: We're told that Affleck's character's name in Runner Runner is Ivan Brock, but that name sounds like it would be a perfect alias by a guy named Jim Young. And when J.P. Marlin was raided at the end of Boiler Room, Jim Young was nowhere to be seen. Knowing that he's wanted by the U.S. government, of course Jim Young fled to Costa Rica, changed his name, and started a crooked Internet gambling empire to rival his crooked stock brokerage.

About a year ago, I interviewed Ben Affleck for Argo and I brought up the subject of Boiler Room. Affleck responded, "That was fun ... I just did this movie Runner, Runner ... I play a sort of Gordon Gekko of Internet gambling websites who lives in Costa Rica -- it's just nightmares from the id kind of thing. And it reminded me that the speeches and stuff were fun -- like Boiler Room. I thought, Oh, God, these are so great, to have these long speeches to do kind of gymnastics with. It was fun -- it reminded me of Boiler Room."

At the time of that interview, I had never heard of Runner Runner, let alone brought it up. So, yes, there's your proof that Affleck was channeling Jim Young from Boiler Room during Runner, Runner.

So, now, here's how this ties in with Batman.

There's been plenty of speculation out there (from myself included) about why Affleck would want to play Batman. At Grantland, Bill Simmons thinks it's the "eff you" move to complete "the greatest Hollywood comeback ever."

Now, there's probably a hint of truth in that. But I think the greater truth is that Affleck's been grinding away on his comeback for so long, he just wants to have some fun in-between. I mean, look, as I type this, Runner Runner is sitting at 23 percent on Rotten Tomatoes. (There is a U.S. review embargo that lifts on the day of release, so I can't give my own critical thoughts on Runner Runner as a whole just yet.) But, based on the international reviews that are out there, it's safe to say Affleck didn't take this role for its potential critical success -- he took it because he thought it would be fun. And, I will say this: Ben Affleck looks like he's having the time of his life during Runner Runner.

I'm convinced that this is why Ben Affleck agreed to play Batman. Ben Affleck thought it would be fun. (Well, also, there's money.) I have a hard time believing at this point it's, as Simmons says, an "eff you." I mean, the guy just won an Oscar. What better "eff you" is there than that? I think it's much simpler than that.

And, you know what? Because of Runner Runner, I'm changing my mind on this whole situation. As far as I'm concerned, Ben Affleck deserves to have some fun. I mean, look: Ben Affleck has worked his ass off the last few years. Starting with Hollywoodland, then directing Gone Baby Gone, then The Town, then, finally, Argo -- Affleck does deserve to sit back and have a nice time with his career for a while without worrying about his potential Oscar chances. Sure, selfishly, I want to him to keep making great movies -- I certainly haven't changed my mind about that -- but after seeing him chew scenery again in Runner Runner, OK, fine, I get it. He looks happy.

Or, as Jim Young says in Boiler Room, "Look at the fucking smile on my face. Ear to ear, baby." 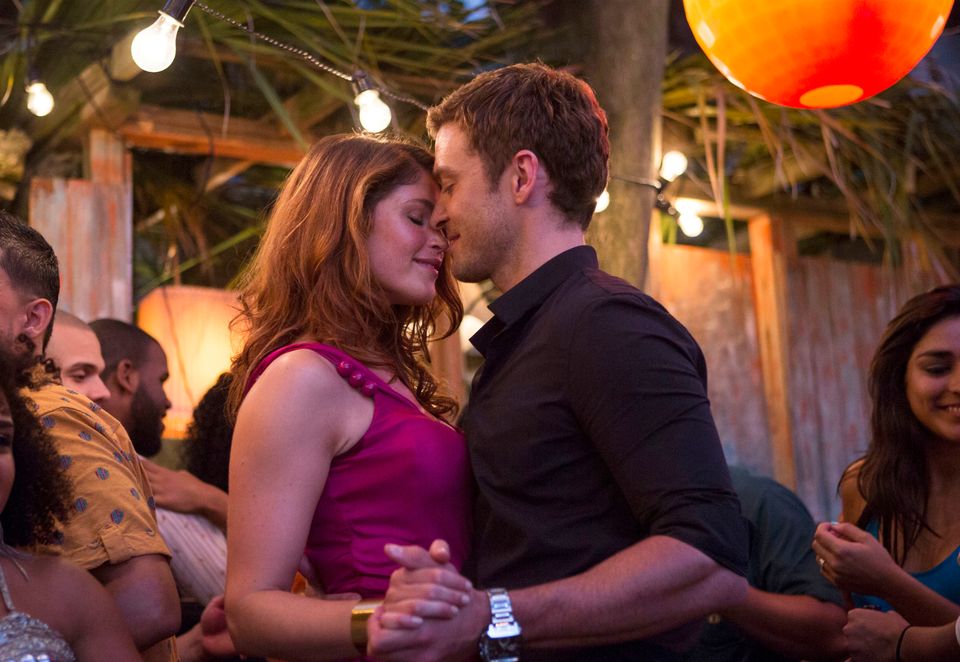