I'm certain being in the spotlight for not wanting the PBS show "Finding Your Roots" to include mention of your slave-owning ancestor has been a real pain. I'm sure you want this whole episode behind you. I get that: I'm related to the most successful transatlantic slave-trading dynasty in U.S. history.

I thank you for your honesty in admitting you were embarrassed. Many white people, upon discovering enslavers among our ancestors, feel embarrassed, ashamed and guilty.

I appreciate you writing, "We deserve neither credit nor blame for our ancestors and the degree of interest in this story suggests that we are, as a nation, still grappling with the terrible legacy of slavery. It is an examination well worth continuing." Yes it is. And I can tell you from experience that what you choose to do next to continue that examination is what matters now.

I was in my forties when I learned how involved my family was in the slave trade. In December 2000, my seventh cousin Katrina Browne sent a letter to a distant cousin of mine -- one of 200 she sent to far-flung relatives. I called Katrina, and she invited me to be one of nine relatives to join her in retracing our ancestors' trade route, from New England to Ghana and Cuba and back.

We learned that three generations of DeWolfs, over 50 years, were responsible for transporting more than 10,000 people from West Africa into slavery in North and South America and the Caribbean islands. The result of our journey in the summer of 2001 was the documentary "Traces of the Trade: A Story from the Deep North," which aired on PBS. I wrote Inheriting the Trade about my experiences in making the film.

"The harm our ancestors caused is not our fault. But repairing the consequences is a responsibility we all share."

Some members of our family said things like, "Why bring this up? I'm not responsible for what my ancestors did. Black people are better off in America anyway. Why don't they just get over it?"

As I learned by listening to African and African-American people, "We don't just get over it, because it's not over."

When traumatic wounds are not healed, we can literally pass them on to our descendants through our DNA (watch "The Ghost in Your Genes"). Unhealed wounds are passed on structurally as well. We only have to read the headlines to see that inequity and injustice based on race remain deeply embedded in the fabric of our nation.

The harm our ancestors caused is not our fault. But repairing the consequences is a responsibility we all share. Expressing regret is one step, but regret doesn't amount to much without a commitment to repair the damage.

Here are a few suggestions. First, research your ancestor, Benjamin Cole, and you will find others who were involved in slavery. Find their wills, deeds, property documents and letters: anything that offers clues to the identities of the people whom they owned. Make those records readily available on Our Black Ancestry.

You can also support efforts like The Slave Dwelling Project. To fully understand our personal and national history, it is critical to preserve and share as much of the history -- physical, written and oral -- as possible.

"To fully understand our personal and national history, it is critical to preserve and share as much of the history -- physical, written and oral -- as possible."

You may have seen links to Coming to the Table on your Facebook page. I'm the executive director of this community of descendants of enslavers and the enslaved who work together to heal wounds from racism that are rooted in slavery. We -- white people -- need to come to the table in support of these and other such efforts.

I'm writing this letter because you're in the news. But I invite all white Americans to recognize that slavery drove the economy and built this nation. Every white person -- directly or indirectly -- participated and benefited. Everyone who has immigrated here has benefited.

Ben, you can do little or nothing to make a difference. Any white person can do the same. You have the unique benefit of using your celebrity to make a difference. All people of European descent can use our power and privilege, to whatever degree we have them, to make a positive difference. When we commit to doing so, we will heal wounds and achieve a better nation and world.

Dear Ben Affleck, My Ancestors Were Slave Owners, Too. Here's What We Can Do About It.
Obama Visits 'House Of Slaves' 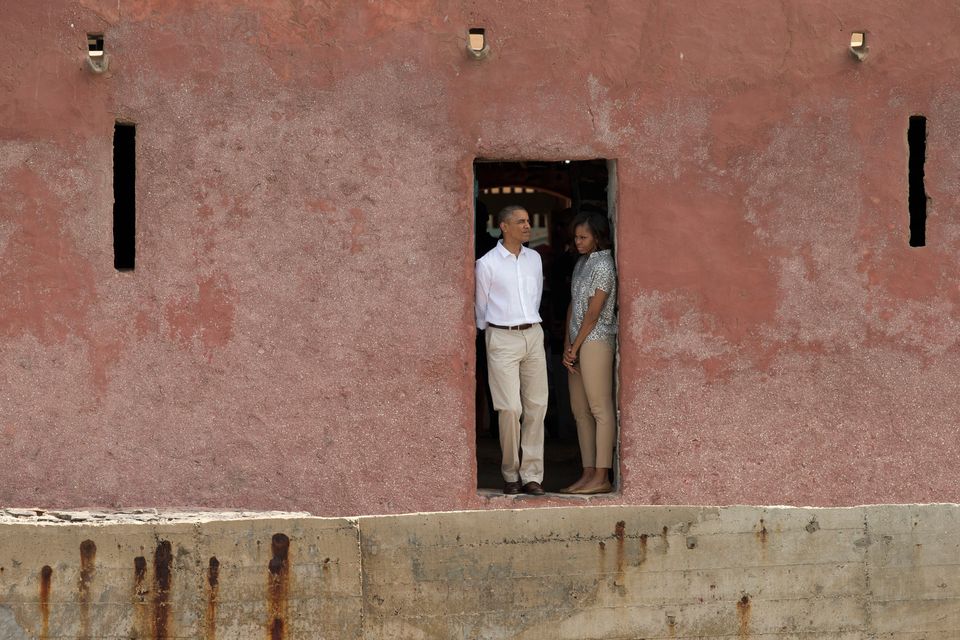 1 / 16
Barack Obama, Michelle Obama
U.S. President Barack Obama and first lady Michelle Obama stand together in the 'Door of No Return,' at the slave house on Goree Island, in Dakar, Senegal, Thursday, June 27, 2013. Obama is calling his visit to a Senegalese island from which Africans were said to have been shipped across the Atlantic Ocean into slavery, a 'very powerful moment.' President Obama was in Dakar Thursday as part of a weeklong trip to Africa, a three-country visit aimed at overcoming disappointment on the continent over the first black U.S. president's lack of personal engagement during his first term.(AP Photo/Rebecca Blackwell)
AP