Food people are a very giving people, but every once in a blue moon we're delivered a gift that is too good to share. A gift that turns us into Gollum-like beasts, cowering over a pint of ice cream and whispering, "My precioussss." This time, the treasure is Ben & Jerry's latest flavor, Two Wild & Crazy Pies.

It tastes like someone deconstructed all the best parts of a Good Humor Chocolate Eclair Bar -- the soft cookie crumble, the milky, chocolate ice cream -- and melted them into a tub of ultra-creamy coconut ice cream. Whereas Ben & Jerry's has a tendency to go a little light on the swirl, they made no such mistake this time -- the crumbly texture of the chocolate cookie swirl is ubiquitous throughout every spoonful, making it one of the most generously proportioned flavors in Ben & Jerry's history. Here's what our sample looked like, before we devoured it: 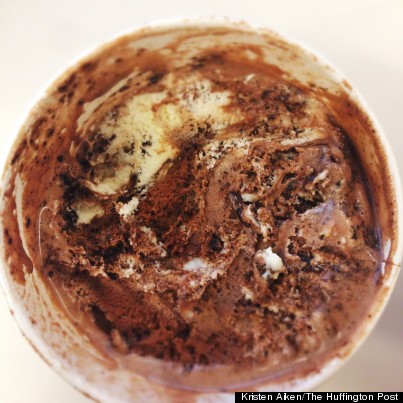 But don't get too excited -- it's only available at Scoop Shops for a limited time starting September 24, and will likely never see the frozen foods aisle at your local grocer. If it weren't for this tragic fact, we might go so far as to say that this could be Ben & Jerry's most popular flavor ever.

Two Wild & Crazy Pies is the third of four unique "SNL"-themed Ben & Jerry's flavors to appear in Scoop Shops. June of 2014 saw the release of Lazy Sunday and Gilly's Catastrophic Crunch, both based on recent sketches. The newest flavor takes a bit of a vintage turn, and the fourth flavor's theme is still up in the air, as it's set to debut in early 2015.

"While our first two 'SNL' flavors were inspired by more recent characters and sketches, we didn't forget the classic from the earlier decades," said Scoop Shop Brand Manager Alison Gilbert in a press release. "We were torn between this and the Bass-o-Matic, so it was obvious which lent itself to a better flavor."

If you've never seen a clip of Two Wild & Crazy Guys, do yourself a favor now and introduce yourself to Yortuk and Georg Festrunk. You'll never look at plaid pants the same way again: