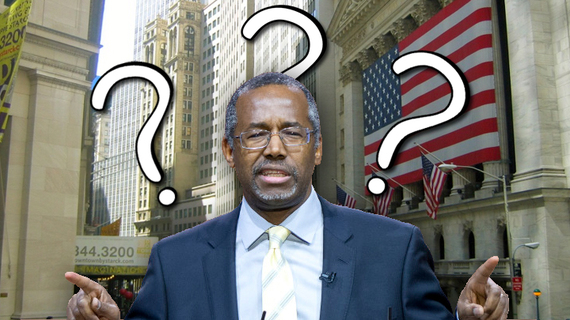 GOP presidential aspirant and former neurosurgeon Ben Carson had an interesting idea about bank loans when asked about rising interest rates and the national debt, at a closed-door gathering of Americans for Prosperity at the South Carolina Tea Party Coalition Convention. He asserted that banks have no incentive to loan people money when the interest rates are near zero.

Actually, the opposite is true -- when interest rates are near zero, banks are able to get money from the Fed for nearly free, thus increasing their profit margins when they then loan that money to consumers or small businesses at a much higher rate. The more likely reasons banks are not lending to small businesses are tightened credit standards, reserve ratio requirements, and the opportunity cost to banks, which can make more profit off speculative bets. Add to that the rash of community bank failures during the 2008 financial crisis, causing a tightening of available credit in many areas.

In an interview from August of last year, Biz2Credit co-founder Rohit Arora told the Wall Street Journal, "The failure of so many small banks [in Georgia] has created a credit desert."

It is indeed true that lending to small businesses has not recovered since the meltdown, but it's not because interest rates are too low... Maybe Ben Carson should stick to medicine.