How I Gained It: I was always obese. I have nothing to blame but pure laziness, poor eating habits and not exercising. I just didn't care. I knew I was big, but I didn't know I was that big until I looked back. I was also addicted to soda. On average, I consumed nearly 10 20-ounce bottles a day. On a bad night, I could drink a 2-liter bottle with dinner.

Breaking Point: On July 22, 2009, I woke up and decided I had simply had enough of being obese for my entire life. I had tried radical diets in the past and lost anywhere from 30 to 50 pounds, but then I would gain it all back and more. That day, something changed. I knew I had to get my weight under control and defy each plateau as they arose. I didn't want to die by age 35.

How I Lost It: The first thing I knew I had to cut out was the soda. I stopped cold turkey. It was unbelievably hard the first week -- by day three I couldn't stay up past 9 p.m. and I was having withdrawal symptoms like headaches and constant nausea. But I pressed on, and I am proud to say that I haven't had a soda in over two years, and it was one of the best decisions I made along this weight-loss journey. It was the jump-start I needed.

I also stopped eating fast food, fried foods and potatoes, and cut back on salt. I limited bread to whole-wheat only, and I tried to have red meat only once a week. I aimed to eat 1,500 calories and drink a gallon of water every day. Every now and then I would allow myself an apple or cranberry juice, or a glass of 2% milk with dinner.

When January 2010 came around, I resolved to finish a 10K. I signed up for the Peachtree Road Race in Atlanta, Georgia. At that point, I was doing my best to just be able to walk for a short period of time without giving up. I made it my goal to walk every day, twice a day when I could. The length of time didn't matter; I just had to do it. As I got faster, I was able to start jogging some. Only July 4, 2010, I completed my first 10K race at 1:42:02 with my wife by my side.

The next year I continued pushing myself and set a huge goal to complete my first half-marathon. I did it in 3:03. Two days later I signed up for a full marathon, which I'll be running in March 2012.

I never thought I would be where I am today, but it has truly been a journey to remember. I have defied my body both mentally and physically to get where I wanted, and it's not over yet! I want to help others realize that they, too, can defy the odds and crush their weight-loss plateaus with a lot of hard work and determination. You have to just press on toward the goal no matter what. 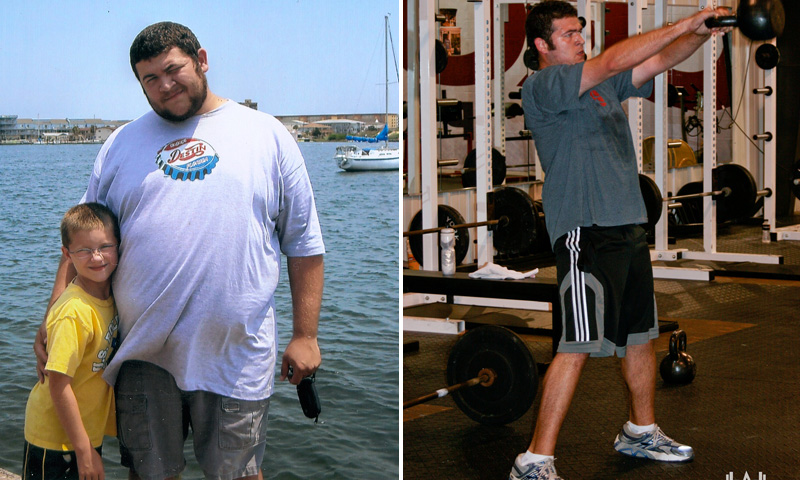