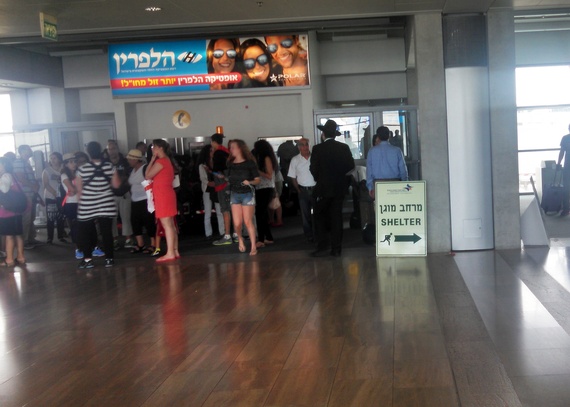 TEL AVIV - At 11:50 on Monday morning a scrum of passengers jockeying to board United Airlines Flight 85 from Tel Aviv to Newark fell silent when a warning echoed in Hebrew and Arabic through Ben Gurion Airport. Heads, and then heels, turned. The scrum morphed into a herd moving away from Terminal C's vast windows and boarding gates.

When Israel's Iron Dome missiles greet Hamas' rockets there's a distinctive resonance-- the kind of rich baritone you hear and feel. Under present circumstances, it's oddly comforting. In the 12 days I traveled around the West Bank and Israel (July 9-21), residing beneath the arc of Israel's sophisticated $100,000 Tamir interceptor missiles and Hamas' crude $800 steel-cylinder Qassam rockets, I lost count of the number of times I relaxed into the familiar thunder.

However, I clearly recall the last loud clap. It occurred just before noon on Monday and originated overhead. Above Ben Gurion Airport.

In the time it takes for a rocket fired from Gaza to reach Tel Aviv -- roughly 90 seconds as the hoopoe flies -- the herd in Terminal C had put about 30 meters between itself and Gate 8. Nobody panicked. The brisk walk seemed no more frantic than a last-minute gate change.

The herd didn't blink. It turned on its heels and returned to its scrum at Gate 8. Meanwhile, a dozen or so early boarders and business-class travelers had sat comfortably -and apparently clueless -- in United's wide-body Boeing 777.

"There was an alarm?" my Israeli seat mate in row 20 asked after I boarded. "I guess ignorance is bliss, yes?"

Apparently. At least that seems to be the thinking of the Federal Aviation Administration, U.S. Secretary of State John F. Kerry, Israeli Prime Minister Benjamin "Bibi" Netanyahu, and Israeli Minister of Transportation Yisrael Katz. "Ben Gurion Airport is safe and there is no need to be worried about the security of airplanes and passengers," Katz said on Tuesday, after a rocket landed one mile from airport runways and the FAA temporarily banned U.S. airlines from flying into or out of Tel Aviv.

Speaking into TV cameras and reporter microphones, Katz kept repeating himself, as if saying it enough times would make it true: "Ben Gurion Airport is safe. ... There is no reason why airlines should stop their flights, handing a prize to terrorists."

No reason? As Flight 85 ascended from Ben Gurion's runway I could only hope it would not come between a missile and a rocket. This is safe?

According to The Washington Post, sometime on Tuesday night Netanyahu phoned Kerry to request help in lifting the travel ban. Of 3.54 million tourists to Israel last year, a record number that contributed $11.4 billion to its economy, 53 percent were defined by Israel's Central Bureau of Statistics as "Christian." The Holy Land of Jerusalem is Israel's big draw.

So, it came as no surprise, just hours after Kerry departed Israel -- declaring progress in securing a truce between Israel and Hamas -- that the FAA cut short its 48-hour travel ban. I can't imagine what Netanyahu offered behind closed doors. With no specific explanation or new evidence, the FAA adopted Katz's oft-repeated (il)logic. Ben Gurion Airport was stamped "safe" again.

"[T]he FAA worked with its U.S. government counterparts to assess the security situation in Israel," its press release stated, "and reviewed both significant new information and measures the Government of Israel is taking to mitigate potential risks to civil aviation."

Last Friday, as I was leaving a hotel in Jerusalem to travel to Tel Aviv, I ran into one of the last remaining Christian groups daring to tour Jerusalem even as Netanyahu promised an escalation in the ground fighting with Hamas. Tour members were with Snoqualmie Valley Alliance, a nondenominational church in Fall City, Wash., 30 miles east of Seattle.

"We've relied on our faith," one member told me, explaining why the group had stayed its course in Jerusalem. "Plus, we knew Bibi would keep us safe."