Valentine’s Day is when couples celebrate their love for each other, usually on Instagram, where everyone can see it and be annoyed by their obnoxious, over-the-top public displays of affection, and … sorry, lost my train of thought.

Look, not everyone is in a happy relationship on Valentine’s Day, and that’s perfectly fine. In fact, you or a close friend or family member may have just gone through heartbreak.

There’s a way to heal heartbreak on Valentine’s Day, and it involves ice cream. We wanted to come up with the perfect ice cream to eat after going through a rough romantic patch, so we spoke to Eric Fredette, a flavor guru who has worked at Ben & Jerry’s for 23 years and developed a ton of delicious flavors.

He has created a flavor exclusively for HuffPost Food & Drink readers that not only is easy to make in your own kitchen but also rivals anything you’ll find in your grocery’s ice cream section. We’ll provide you with the recipe below, but first, here’s the scoop on how Ben & Jerry’s flavor gurus create ice creams.

Who comes up with Ben & Jerry’s crazy concoctions?

A team of six people is responsible for developing the flavors, and they’re evenly split between chefs and food scientists (as in people who went to graduate school to study the field). “Three of us are culinary trained, and three of us are food science trained,” Fredette said. “It’s key to have both, because the chef brings flavor, texture, color, the experience part, and the food scientist does things like make sure [the product] has a good shelf life.” He went to Johnson & Wales for culinary school and previously spent six years working for Rhino Foods, the company that invented cookie dough for use in commercial ice cream.

Fredette begins creating flavors well before he steps into the kitchen to make a test batch of ice cream. “I have a one-track mind. It’s all food all the time,” he said.

He’s a voracious reader of food blogs, and he’s constantly looking at food trend data, including the types of flavors chefs are cooking up in restaurants. And when he’s got a new flavor idea that he and the team agree is worth testing, he does something you’ve done a million times: He goes food shopping. Ben & Jerry’s has lots of sweet and savory ingredients in house that it mixes into its ice creams, but if he wants to incorporate a new item into a flavor, he’ll buy it in the real world (first making sure it’s GMO-free) and take it back to the lab.

Every ice cream starts with a sweet cream base. “It’s fresh cream, condensed skim milk, sugar, egg yolks and stabilizers,” Fredette said. “It tastes like fresh dairy notes ― like a glass of milk.” Then he can add an ingredient like caramel, coffee or strawberry to give the ice cream a flavor. Here’s where it gets fun. “After that, we decide what other flavors we want to combine with our base,” he said. And that means chunks of whatever they want to throw in, from cinnamon bun dough to almond toffee chips, fudge-covered waffle cone pieces and red velvet cake pieces.

He thinks like a chef, so the idea is not only to include the tastiest ingredients; it’s also how to get those chunks to pair with the ice cream and make the final product irresistible. “I’m a flavor junkie,” he said. “I like to layer on flavors. If you have espresso chunks, that’d be really good in caramel, sort of like a macchiato.” He has achieved layering in flavors like Urban Bourbon. “It has burnt caramel ice cream with a whiskey caramel swirl. There’s actual bourbon in the caramel swirl. Bourbon has depth of flavor — vanilla, leather, grass, hay and just tons of stuff you’ll taste if you think about it while you’re eating it. All those nuances build up and make a complete package.”

Of course, a new ice cream isn’t ready to hit shelves or scoop shops until it has been tested. “I’ll put together a few versions of [the new flavor],” he said. “I’ll taste it with my colleagues, and we’ll pick it apart, say it needs a little of this and a little of that ― more salt or a few less cookies or something. We’ll rebuild it again and incorporate those concepts and ideas.” It doesn’t sound as though he strikes out often with new flavors. “It’s really hard when you’re putting chocolate and cookies into ice cream to have someone go, ‘Yeah, that’s awful. We should never do that.’”

Here’s how to make Delicious Uncoupling at home

Fredette came up with a new flavor just for HuffPost named Delicious Uncoupling (shout-out to Gwyneth Paltrow), and it includes cookie milk ice cream from the company’s brand new line of cookie dough core ice creams, along with some fun surprises.

We’ve got good news and bad news. The bad news: Delicious Uncoupling is not in stores. Yet. Hopefully, Ben & Jerry’s will make it one day, because the combination of rich chocolate ice cream, shortbread cookies, cookie milk ice cream and chocolate chunks sounds unbelievable. The multiple layers of chocolate notes, along with a shortbread crunch, will make even the most brokenhearted feel as if everything’s right in the world again. And if you buy that cookie dough core ice cream, consider customizing this recipe by adding the core to your concoction. Fredette says that figuring out how much cookie dough core you want to scoop in each spoonful will “get your mind off of whatever horrible thing happened earlier.”

And that cookie milk ice cream? “It tastes like milk after you’re done dipping your favorite store-brand chocolate chip cookies into it,” he said. “We play on nostalgia a lot. It brings you back. If I can have you connect with the flavors and nuances I’ve added to the ice cream, I’ve got you. Because it usually brings up a really good memory.”

The good news: You can easily create Delicious Uncoupling at home. We’ve included a Valentine (with the recipe!) at the top of this page that you can send to a friend who’ll appreciate it.

We wish you a Happy Valentine’s Day full of nothing but a mended heart and multiple scoops of ice cream.

Here's Why You Crave Different Foods Than The Opposite Sex

Why We Actually NEED To Eat Fat In Our Diets 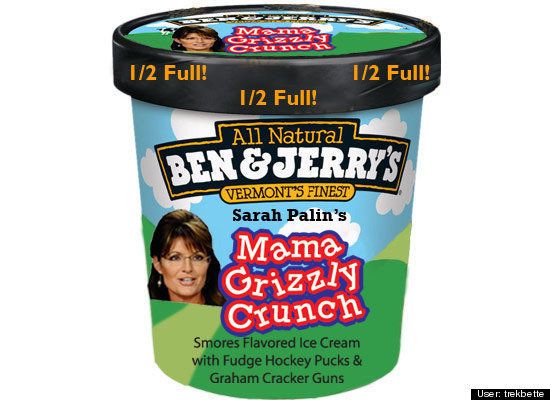