Ben Mendelsohn is having quite the moment, and if those "Star Wars" rumors end up being true, he's bound to become a household name in Hollywood.

The Australian actor has been well-known back home since he was a teenager, but you've likely seen him more and more recently in American films and TV shows. He was killed by Bane in "The Dark Knight Rises," played Jessa's father in HBO's "Girls," and appeared alongside Brad Pitt in "Killing Them Softly."

The Huffington Post sat down with Mendelsohn at the Tribeca Film Festival last month to discuss the wardrobe he took home from "Slow West," who he'd like to play in the "Star Wars" universe, and his bizarre dance in "Lost River." 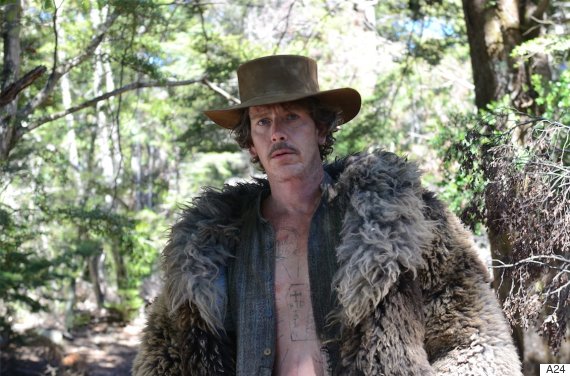 I loved "Slow West." It’s so beautifully made.
Yeah, [Maclean] did really well, didn’t he? It’s beautifully shot. He’s got something, that guy. And Fassbender found him, or they found each other. So I just got asked on board when it was all in its shape and I have a little turn in it.

You don’t show up in too many scenes, but when Payne is on screen he definitely makes an impression.
This, I like this. And that coat [points to the film poster].

Payne's coat is amazing! Did you get to keep it?
I have that coat. I have it sitting on a mannequin at home. I don’t have memorabilia, but try to take a bit of wardrobe, usually because they dress me better than I dress myself. But that coat, that’s a thing of beauty. I’m very proud of it.

Are you going to wear it around?
Yeah, I suppose I might bust it out in moments of great bravery or just deep cold. I did wear it for the premiere in Sundance.

What was it like working with Fassbender?
Michael had a lot of stuff to do. It was all drunk hoo-ha and boy, he did some incredibly dangerous things around a fire, which aren’t in the [final] cut. There was some falling, some drunken shenanigans near fires and rocks, sh*t that I was going, “Oh, f**k.” But there’s a fearlessness to the way he works that is pretty admirable. And Kodi [Smit-McPhee], there’s such a delicateness to him. When he starts acting, he feels like gossamer. It was a good couple of days.

You’ve been so well-known in Australia, but now you’re finally having a breakthrough in the U.S. What’s that feel like?
It’s cool. It’s been a great several years. I came here for a very, very long time and just couldn’t get any sort of traction going. There were a couple of people who liked me, but it didn’t translate into anything that was employment based. I like to think that what really helped it was the one-two punch of "Animal Kingdom" and either “Place Beyond the Pines” or “Killing Them Softly.” Those combined really seemed to set some wind in the sails. It’s been a dreamy couple of years.

I bet. And now there’s those “Star Wars” rumors ...
Yeah, there are those rumors.

So, are they just rumors?
They -- I can definitively and honestly say to you that I have no job yet that I know of to go to. That may change. I would be very happy if that came to pass, but at this stage it’s just chatter.

Ideally, if you were in it, what character would you want to play?
It would depend. I think that the Empire has such room. We only know of a few people on the Empire side of the fence. “Star Wars” is populated by so many great types, who wouldn’t want to be a Han Solo kind of dude? And then you’ve got the whole Luke strain. I don’t think that they’re likely to -- I’d be thrilled, actually, if they were looking at me for a Skywalkery-type of a number. But yeah, there’s a lot.

You also worked with Gosling again in “Lost River,” where you have singing and dancing scenes. Had you ever done something like that before?
No, I’ve never sung before. That’s me doing my Frankie Laine impersonation. There’s a little film I did where I sing a bit, but nothing like that. And the dance was something we just figured out very last minute just before we were going to shoot the scene. We knew we had it coming up and I went down there and we put on a A$AP Rocky track and just danced off.

That’s even more bizarre because that’s totally different from the song playing in the scene.
That’s right, it’s not [the same]. But if you ever want to hear what it was that I was dancing to, it is “F**king Problems.”

Did you know the song before that?
Yeah, I was familiar with the opus. I’m a reasonably -- I have my phases -- but I really like music.

Here's Who Ben Mendelsohn Wants To Play In 'Star Wars' If Those Rumors Are True
A Complete Ranking Of 'Star Wars' Characters
1 / 20
20. Mon Mothma
A leading figure in the Rebel Alliance, Mon Mothma briefs the rebel forces before the Battle of Endor. Remember: Many Bothans died to bring us these rankings. <em>-CG</em>