PITTSBURGH (Associated Press) -- Ben Roethlisberger got the privacy he wanted for his wedding Saturday, with police providing tight security around the church in affluent Ohio Township where he and Ashley Harlan were married and tinted windows on expensive cars leaving much of the guest list a mystery.

Still, the hope of a glimpse at the Pittsburgh Steeler quarterback, his new bride and the dozens of team luminaries who turned out for the ceremony was enough for Dolly Metz to sit in a car – complete with Steelers covers on the headrests – in a nearby parking lot with the windows down in 90 degree heat

"This is the best part of my day," said Metz, who lives in McKees Rocks. "I know he was supposed to send a limo for me too, but it broke down."

Metz and friends Eugene and Carol Lovely were among a small group of Steeler fans who tried to show their support for Roethlisberger.

The organization was well-represented too despite the NFL's ongoing labor dispute.

Harrison entered in a rare Mercedes sedan, according to police, his presence perhaps proof there was no fallout from his criticism of the quarterback in a "Men's Journal" article released last week.

The Pro Bowler placed some of the blame on the team's Super Bowl loss to the Green Bay Packers on Roethlisberger in the story, then later apologized saying his comments were taken out of context.

Whenever Roethlisberger and his teammates return to the field, he'll be a married man, an idea that seemed to resonate with the fans who have watched his legal troubles the last few years with growing exasperation.

The Super Bowl winning quarterback has twice found himself accused of sexual misconduct. Though neither incident resulted in charges, he was suspended for four games by NFL commissioner Roger Goodell last year.

He returned to lead Pittsburgh back to the Super Bowl, and surprised some by revealing his engagement to the 26-year-old Harlan, a physician's assistant from New Castle, Pa., this spring.

Roethlisberger has acknowledged the need to restore his public image, and fan Linda Moule admitted she was a little skeptical when she heard the news because he's kept news of the relationship quiet for so long.

"It certainly is a step in the right direction," Moule said. "Like anyone, it's a coin toss on if it will last. This is certainly not Prince William and Princess Catherine."

That didn't mean Moule and her extended family didn't want to send Roethlisberger a message that they were behind him.

Sitting on her parents' lawn, Moule, her two sisters and their children waved as wedding guests passed by, with some honking their horns at the homemade sign the family put together that read "Best Wishes Ben & Ashley."

It would be as close as most would get to one of the most anticipated – and most secretive – social events in the city's recent history.

Fans and media alike were kept at a safe distance from the ceremony, the details of which were closely guarded. Little information about the nuptials was leaked beforehand, though the police presence around the Christ Church at Grove Farm – where both Roethlisberger and Harlan are members – indicated this was no ordinary Saturday.

Fears of a fan frenzy led local resident Gina Schrauder to bolt for the city.

"I want no part of this," she said early Saturday morning.

Yet it never came. There was no tailgating. No terrible towels. Only a parade of luxury cars, trucks, shuttle buses and SUVs.

Guests were required to show an invitation and a photo ID to get in. Moule didn't have a problem with the secrecy and considered the light turnout a sign Pittsburghers were content to let the Roethlisbergers have their space on their big day.

"We all have private weddings, why can't they?" Moule said.

Will marriage change him? Schrauder doesn't think it matters.

"As long as he keeps playing the way he's playing, it'll be fine," she said.

(This version CORRECTS Corrects to Catherine in 13th paragraph. With AP Photos.) 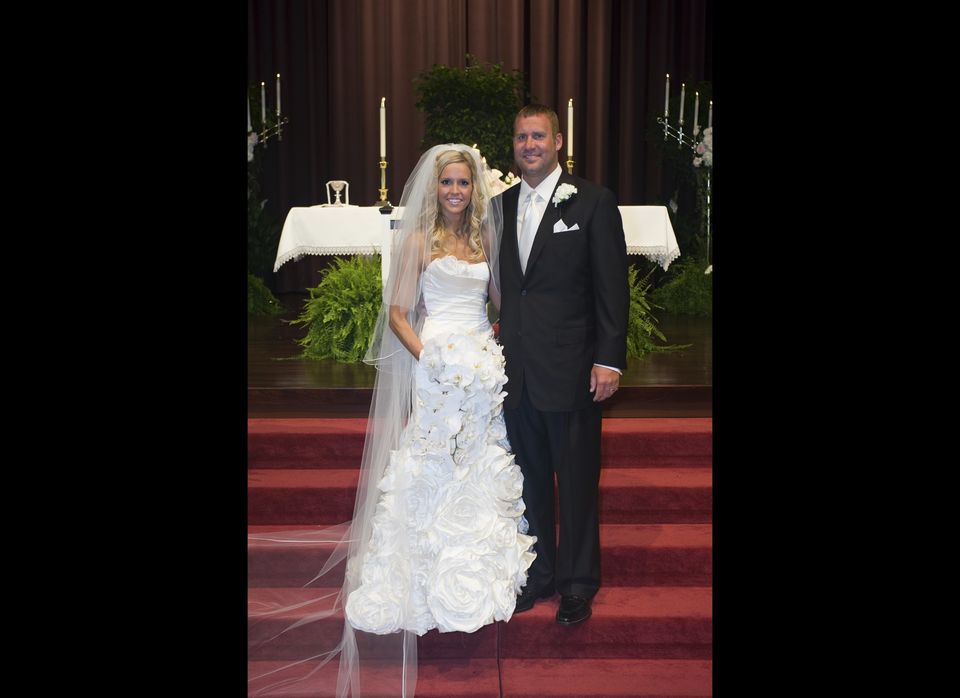