Conservative pundit Ben Stein appeared on Newsmax on Tuesday to discuss the fatal police shooting of Michael Brown in Ferguson, Mo., and challenged the use of the term "unarmed" to describe Brown.

Stein was discussing the shooting with host Steve Malzberg and said the use of the term "unarmed" to describe Brown, who was "apparently on marijuana," was akin to "calling Sonny Liston unarmed or Cassius Clay unarmed."

"He wasn't unarmed," Stein said. "He was armed with his incredibly strong, scary self.

What to say? Here we have almost every meme born of 400 years of American race hatred rolled into one neat, bespectacled package in the form of Ben Stein.

In a paper entitled, "Whites See Racisms as a Zero-Sum Game That They are now Losing," Michael I. Norton of the Harvard Business School and Samuel R. Sommers of Tufts University conducted research on a "general mindset gaining traction among Whites in contemporary America: the notion that Whites have replaced Blacks as the primary victims of discrimination."

The researchers wanted to test previous research suggesting that "White Americans perceive increases in racial equality as threatening their dominant position in American society (Sidanius & Pratto, 1999), with Whites likely to perceive that actions taken to improve the welfare of minority groups must come at their expense. (Eibach & Keegan, 2006)."

The results were enlightening:

As in previous investigations, our results revealed that Whites see racism in zero-sum terms. For White respondents, ratings of bias against Whites and Blacks were negatively and significantly correlated for each decade, suggesting that, within each decade, Whites linked lower levels of anti-Black bias with higher levels of anti-White bias.

Those like Stein see any progress that blacks make as a direct attack on their status -- their being. To them, any lessening of white supremacy is a threat; it's akin to bias against whites. To such modern racists, the historical status as the American master race is so prized that they perceive black progress as an attack against them. Is it any wonder that a black president has driven them over the bend?

"It's a very sad state of affairs," Stein said. "I mean it used to be, there was a time ... when lynchings of African Americans were not that incredibly rare. Now the lynchings are the police and it's just an outrage."

Yes, according to Stein, being whisked off to a secret location with hundreds of thousands of dollars at your disposal from likeminded well-wishers -- as is the case with the officer who killed Michael Brown -- is akin to this: 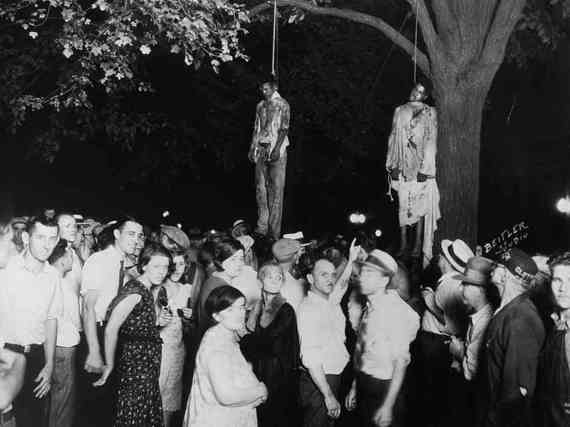 The court's conservatives ruled that you can't use race to achieve integration, which is basically saying that you can't work to achieve integration because, well, it's all about race. "When it comes to using race to assign children to schools, history will be heard," he said. And history is heard and obeyed -- the history that has kept black and brown students in sub-standard, sub-funded schools through of redlining, and employment and housing discrimination. This is clearly the history conservatives honor, the history to which they cling.

Ignoring the toxicity of history and equating the systemic racist effects of the American criminal justice and education systems with a common desegregation scheme is to imply, like Stein, that minority gains of equal status are an intolerable burden on those whose status they seek to match. Even Justice Anthony Kennedy had to write a separate opinion to distance himself from the conservative Justices' insistence that the "State and local authorities must accept the status quo of racial isolation in schools."

To the modern right, black gain is white pain. The more respectable among them have learned that if you pretend to believe that racism does not exist, despite the undeniable evidence, you can perpetuate white supremacist outcomes indefinitely; and better still, you can sound high-minded in your own ears while doing so.

Black robe or white, the result is the same.