Lance Armstrong is in the middle of the Tour de France, as indicated by his hyperactive Twitter presence, and his celebrity friends have been stopping by to cheer him on.

First his "dear friend" Bono wished him luck on July 3, the eve of the race. Twitpic below.

Last Tuesday Ben Stiller made an appearance, goofing around on Lance's bike and sporting a yellow wristband. After a quick sprint he declared himself a specialist in "under a minute" races.

Robin Williams, who had heart surgery to replace an aortic valve in March, joined him after Stage 9 of the grueling 21-stage race.

"Robin Williams stopped by the bus after the finish. He's doing great and got his health back 100%. We made a vid I'll post later. Too funny," Lance tweeted on Sunday.

In the video Robin pokes fun at Lance's compression socks. "Look at this, all the sudden Lance has turned into an old Jew," he says. Then he lifts his shirt to show off his chest scar. 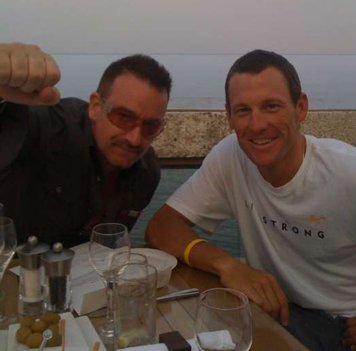