Much will be said about Benazir Bhutto in these days that follow her tragic assassination. Surely many will focus on what this means for Pakistan, for the United States, for stability in the region, and even for those campaigning for the U.S. presidency.

For me, it's more personal and it is about the woman and the leader she was. I first met Benazir on March 9, 1994 when she, as Prime Minister of Pakistan, granted an interview for my book and video documentary on all of the then 15 living women presidents and prime ministers. 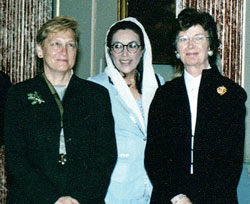 Benazir was the utmost of charm, a touch regal and treated with great deference in her equivalent of the Oval Office of the White House. She gave me her complete attention, even with her daughter sitting on her lap for a time. She showed a side of herself that may never make it to the major news outlets covering her death, with their heavy focus on the geopolitical impact of it. The person may get lost in the politics.

She was a conscious leader -- she observed herself, understood her actions and how they would be perceived both by her country and the world. She knew the reality of being a member of a martyred family, of being a mother, of being a leader in a challenging and unstable land. Benazir knew what it meant to be a woman leader in an Islamic state. She seemed to be juggling it all in her psyche and her life.

Benazir was adept at dealing with the press, particularly Westerners. She was a flesh and blood woman who also was a symbol, an icon, a lightening rod. She was beloved by many and forcefully hated by others. Some because of her politics and some because of her gender.

She and 10 other women I interviewed eventually held a Summit in Stockholm, Sweden in 1996. They formed a Council of Women World Leaders. Benazir and I continued to meet over the years after she left office. We talked on the telephone, saw each other during Council meetings at Harvard (our alma mater). We ate lunch in Dubai, where she lived with her family. I spoke with her last in August 2007 when we talked about her upcoming trip to Washington, D.C. and what she hoped to accomplish. She was always frustrated and felt her side of the story needed telling. Over the years in exile she grew stronger in her belief that Pakistan needed her and that her time would come.

In 1994, when I asked about her about being a woman leader she replied, "I think that male prejudice still runs deep and when one is a woman, whether it is in Pakistan or overseas, I think there are different yardsticks brought forward to judge a woman and to judge a man. I think [people] are more generous with men than they are with women because having a man leader is an accepted fact of life; having a woman leader is not and therefore the hunt for finding the weak spots or the vulnerabilities."

"It is much more personalized where women are concerned and there's a presumption that women are weaker" Benazir said.

I asked if she thought women would change power. "I don't know. I was born into a very famous family. My father was prime minister, my grandfather was prime minister. My family name was recognized and ever since we were growing up we were always searching for anonymity... For me the need was never for power, it was always the dream of Pakistan as an Islamic social democracy, better social justice, it was the dream that Pakistan would not be a dictatorship...that it could be a role model for other Muslim countries that were seeking change through peaceful means rather than violent means."

When I asked about her communication style, she responded, "I was taught that ladies try to have good manners...[But] being nice should never be perceived as being weak. It is not a sign of weakness, it is a sign of courtesy, manners, grace, a woman's ability to make everyone in the room feel at home. And it should never be construed as weakness because it's the men who get the biggest shock, when they construe that niceness in a woman as weakness."

As any leader, Benazir had her flaws. Yet, let us hope we will never in the future question whether a woman is tough enough to handle security, national defense, or isn't willing to do whatever is necessary to lead. Benazir was.