The world is debating the political fallout from Benazir Bhutto's assassination -- from fear of chaos in Pakistan to the impact of her death in Iowa. There is already no shortage of analysis about the national security implications of her death, but I want to write about the young woman I met in England before she became a player on the world stage.

She was at Oxford. I was at Cambridge. And by a strange coincidence I became president of the Cambridge Union and she became president of the Oxford Union. The anomaly of two foreign women heading the two unions meant that we ended up debating each other around England on topics ranging from British politics to broad generalities about the impact of technological advance on mankind.

When I checked my blackberry this morning at 5:28 am LA time there was an e-mail from our news editor Katharine Zaleski: "Benazir Bhutto killed by bombing." Just as the news was filled with the details of her death, my mind was filled with how full of life she had been every time I had seen her, including the last time in 1998 when she came to my home in Los Angeles for a dinner (which Harry Shearer, also there, wrote about). She was in exile, her husband in jail, and she was separated from her children. 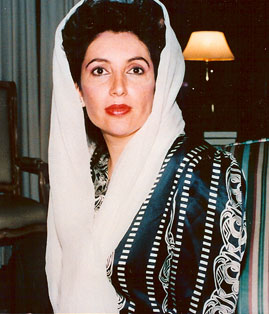 But still, there was an incredible life force about her, a sense that no matter what life brought her way, whether a tough debating argument, or exile, or her father's death by hanging, or the deaths of her two brothers -- she could deal with it, and she would prevail. Until the rally in Rawalpindi.

Three years earlier, I had seen her at the height of her power and fullness of life when she was staying at Blair House in Washington, DC as the visiting prime minister of Pakistan -- the first woman prime minister in the Muslim world. She had her third child with her and took me to her bedroom to meet her. Then she sat on the bed with her baby in her arms while we laughed about our lives on the debating circuit, and talked about her life now. (Including how much she loved her husband. She was trying to convince me that even though it was a marriage arranged by her mother, she had fallen in love with him, as if she had spotted him herself across a crowded room.) She had arrived at Oxford from Harvard, where she had gone at 16 after her convent school in Karachi. But wherever she was, she was at home because she was always at home in her own skin.

I wrote a book about fearlessness last year, long before the rally in Rawalpindi, where she went against everyone's advice and despite the fact that there had already been a failed attempt at her life. She was fearlessness epitomized. Many will debate her political successes and failures, her personal probity in public office, the charges of corruption against her and of course the national security implications of her death, but for now I'm just filled with a profound sadness about the end of a woman that was always brimming with life. I asked her to blog before she returned to Pakistan and blog she did. Here's a portion of what she wrote this fall:

I long ago realized that my personal life was to be subjugated to my political responsibilities. When my democratically elected father, Prime Minister Zulfiqar Ali Bhutto was arrested in 1977 and subsequently murdered, the mantle of leadership of the Pakistan Peoples Party, our nation's largest, nationwide grassroots political structure, was suddenly thrust upon me. It was not the life I planned, but it is the life I have. My husband and children accept and understand that my political responsibilities to the people of Pakistan come first, as painful as that personally is to all of us. I would like to be planning my son's move to his first year at college later this month, but instead I am planning my return to Pakistan and my party's parliamentary election campaign.

I didn't choose this life. It chose me.