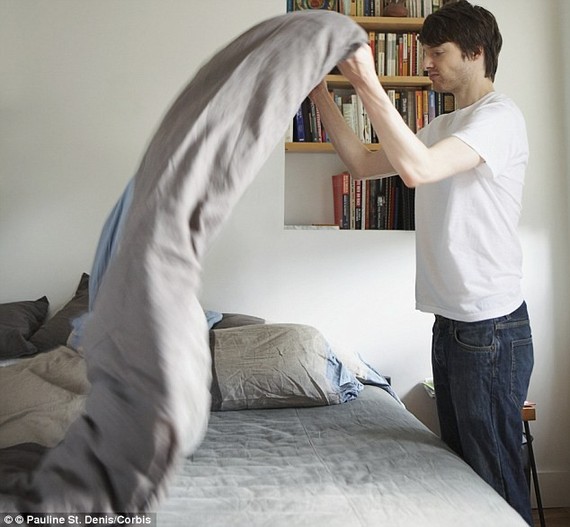 I make the bed every morning as one of my household "duties." Now, perhaps this task is expected of me, but I also know that it makes me feel better before heading off to work. And it definitely makes me feel better to come home to a neat and clean bed at the end of a long day, instead of a rumpled one. Pretty obvious, right? On the surface, it makes perfect sense why I (and many millions of others) perform this "chore" daily.

But I didn't realize that the simple act of making the bed just might be the world's easiest success habit. Not because it automatically brings upon fortune and fame, but primarily because it starts a chain reaction of other productive habits.

As Charles Duhigg notes in his fascinating book, The Power of Habit, "making your bed every morning is correlated with better productivity, a greater sense of well-being, and stronger skills at sticking with a budget." Making your bed is what he calls a "keystone habit," something that kick starts a pattern of other good behavior. And since it happens at the very beginning of the day, you're apt to make better decisions for the remainder of the day thanks to your bed-making routine (exercise is another good example of this concept).

Navy Seal William H. McCraven, commander of the forces that led the raid to kill Osama bin Laden, echoed the same sentiment in his 2014 commencement speech at the University of Texas. He advised graduates, "If you want to change the world, start off by making your bed. If you make your bed every morning, you will have accomplished the first task of the day. It will give you a small sense of pride, and it will encourage you to do another task, and another, and another. And by the end of the day that one task completed will have turned into many tasks completed."

If success and productivity aren't enough, turns out making your bed is also one of the most effective and easiest triggers of happiness. Gretchen Rubin, best-selling author and happiness researcher, says "When I was researching my book on happiness, this was the number one most impactful change that people brought up over and over."

So if you want to accomplish something first thing in the morning, set off a chain reaction of other success-building habits, and contribute significantly to your happiness, perhaps start by making the bed and then let the rest fall into place!

And it only takes a couple of minutes. Sounds like a good deal to me. Sweet dreams!