Benjamin King's paintings, now on view at Longhouse Projects resist easy categorization, slipping fluidly back and forth between material-based abstraction and Mother Earth inspired landscape. Matter and Mother are both derived from the same root word, mater, so perhaps the too prongs of his work are not as dichotomous as they seem. Nonetheless, one of the pleasures of King's paintings is the way his paintings, in his words, "seem to fail as landscapes, while succeeding as abstractions, yet inextricably remain landscapes." Further, King declares, "making this work is like trying to recall a memory where the majority of the visual detail and narrative have been lost and obscured, but for some reason the memory is still there." As I've previously observed (In Between: Various Artists at Various Galleries on the Lower East Side), there is a willingness among many artists today to make work that lands in between easy categorization. 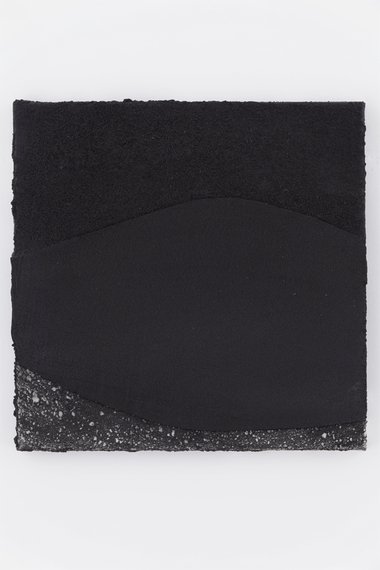 Coal Hill is a small painting at 12x12", divided into three horizontal arcing bands of charcoal and tar paper-like black. Surprisingly for its scale, the piece manages to expand into a massive space while still asserting its flatness. The middle shape flips between seeming to stand for a body of water and a mound of coal, as per the title; because this shape sits physically about 1/16th of an inch thicker than the other bands the natural impulse to confer a pictorial reading becomes counteracted by its physical presence as a discrete object. The minimal means, assertion of material primacy along with the shifting blacks of the painting remind one of radical reductivity of late Ad Reinhardt. However, it is impossible to forget the Coal Hill of the title and the implied concern with environmental degradation and our collective reliance on planet destroying fossil fuels. That the painting is so beautiful adds another twist. Hung close enough to possibly be considered a diptych is Untitled, 2013. More than twice as big as Coal Hill at 28x28", it is composed in a similar tripartite division, but in an acidic yellow and yellow-gray palette so that it reads as the toxic counterpart to the quiet dark beauty of its neighbor. 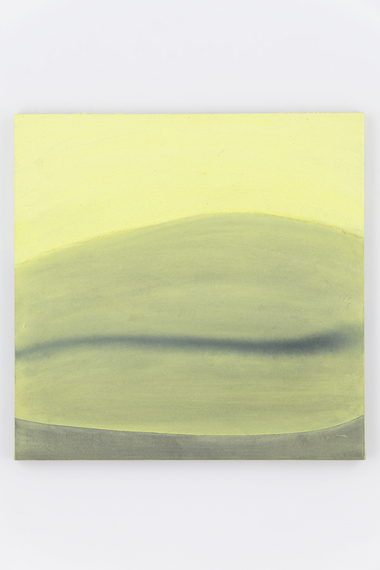 Pet Traffic, 2012, is built from both liquid pours and densely textured acrylic in four vertical bands of warm and cool gray. Lodged between two of the thicker bands, which could be seen as a tree trunk and a rock, floats a purple-gray shape that looks like a separating dual nuclei under a microscope. By conflating multiple perspectives into one picture, the painting asserts its own nature rather than standing as a literal depiction of something. From this one could conclude that what the artist is aiming for is a connection to and enactment of life force through the act of painting. This kind of approach correlates to ideas explored by the more romantic practitioners of the New York School, in particular someone like Jackson Pollock, who spoke about being in and of the painting while making it as if he were channeling like a Shaman. The cool remove of someone like Jasper Johns, however, is just as key to the make-up of King's vision; in particular King acknowledges Johns' edict to take an object, change it, then change it again, as a conceptual basis for making a work of art. 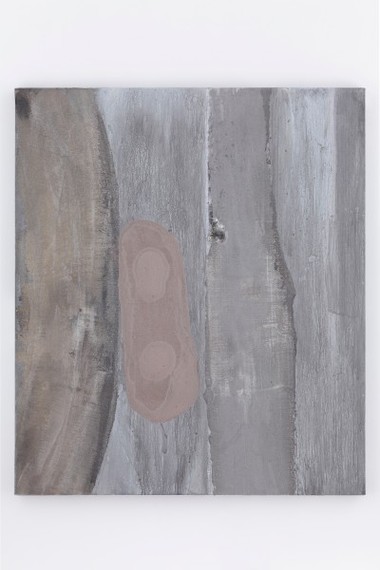 The interplay between opposite types of gestures and modes, and the collision of nature and culture is a consistent quality throughout these paintings. In Silver Throw, 2013 a rocky promontory sits underneath a wash of golden yellow sky. A range of organically colored rock shapes, brown, gray, white and black, are distributed across the canvas; one blob of paint looks like nothing less than an actual cleanly slivered rock shard while nearby an aggressively unnatural material, blue glitter, stands in for the sparkle of snow in shadow. In turn these moves are offset by calligraphic gestural brushwork reminiscent of Chinese brush painting, which King has formally studied. 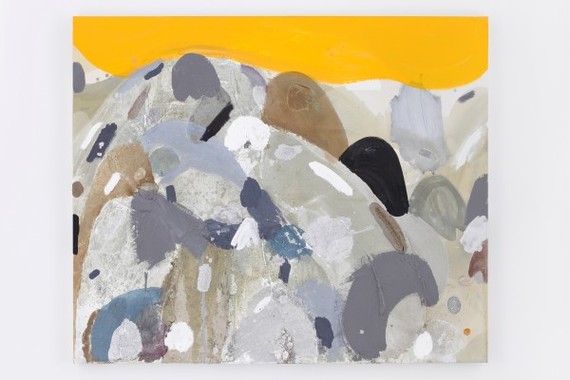 King's paintings are clearly derived from having spent meaningful time in nature, while also reflecting consciousness of historical and contemporary painting. King's visual and conceptual intelligence keeps him well clear of painterly indulgence while his openness to what painting is and can be steers him away from the dryness of theoretically driven art. King is too self-aware to be a true believer of either camp, rather he is equal parts hipster and neo-Romantic hippy. Rather than either/or King paints from the both/and. It is as if he is saying 'yes, I understand the history of image making and visual language and willfully acknowledge them even as I plunge into the mystery of making a thing with all the passion I can muster.' The same way light is a particle AND a wave, King makes paintings from his head and his heart.