Although we're struggling immensely to conjure any image of the beast that is the internet, artist Benjamin Redford seems to have a pretty good idea. The ambitious artist crafted a meticulous rendering of the internet at large, with content crowdsourced from 220 users around the globe. The endeavor, titled "Internetopia," is thought to the largest crowd-sourced artwork ever made. 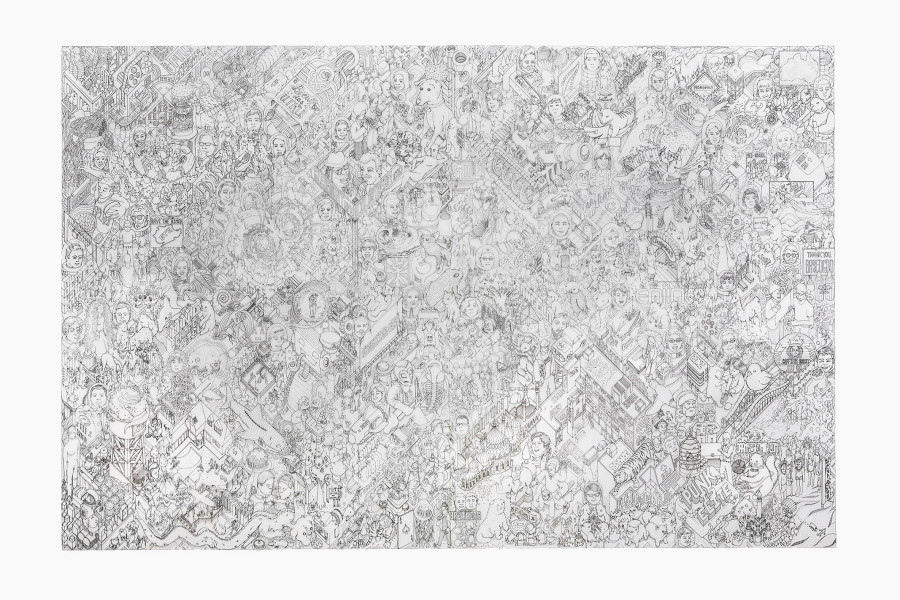 "I read lot of sci-fi so I'm pretty fascinated by the idea of cyberspace," Redford explained to The Huffington Post. "However it's mostly portrayed as infinite, clean, grid systems. I liked the idea of making a more 'human' version, made up by people around the world. Although looking over the completed artwork now, it seems to resemble something completely different."

To create the epic depiction, Redford divided his 2.5 by 1.5 meter canvas (roughly eight by five feet) into 3,012 cubes. Contributors to the piece submitted an idea in exchange for a dollar on Kickstarter -- the more money donated, the more space their ideas would take up on the final work.

These requests ranged from "a cat eating a hot dog sitting in an upright position, sitting on a stack of cats attached together by a belt with balloons on strings floating in the sky" (20 cubes) to "a hot sand-desert with a man lying somewhere not in center, legs and hands spread. Happy or dead, it's unknown. A horse nearby, standing with a head lowered, tired of a long walk" (15 cubes) to "an old beluga whale, teaching a classroom of baby sharks and baby beluga whales. Some of the sharks are morphing into whales" (10 cubes) to "a trumpet" (1 cube).

You can see a complete list of all the ideas here.

Redford spent three months on the piece, first drawing with pencil on custom designed graph paper, then translating it to 150gsm tracing paper with 0.1mm technical pens. Exceeding his Kickstarter goal by a whopping $9,000 (from $2,000 to over $11,000), Redford had more than the necessary artistic inspiration to fill his massive canvas. The resulting artwork is as sprawling and strange as the net itself, chock full of just as many frivolous distractions and moments of unexpected poetry.

So, if you're still wondering what a drawing of the internet looks like, it has seven "Where's Waldo" Waldos, three penises, two repetitions of the number 42 and a lot of animals. Take a look at the piece below and examine a more detailed version here.