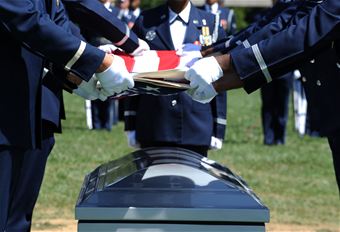 Behind almost every veteran is a family whose life is shaped by their service. Military families are a unique breed of Americans. I don't think I've ever met an active duty military member who did not always have a bag packed and ready to go at a moment's notice. During periods of high alert, the bag is usually sitting by the front door; a constant reminder life could change instantly with one phone call. Too many times, that dreaded phone call places the family in a funeral procession. This was never more evident to me than during a recent trip to Arlington National Cemetery.

Considered by many to be the flagship of military burial grounds, Arlington holds at least 30 funerals each day, and its organizers have everything running like a well-oiled machine. While there, it was impossible to overlook all of the hearses, positioned along the smoothly paved roads, patiently waiting to deliver a deceased veteran to his or her final resting place. Moving quietly among the scene were the bereaved families. For the moment, they could feel some measure of comfort by the dignified presence of the Honor Guard who were there to guide them gently, yet firmly, through the paces of the day. But I knew after the flag was folded, those family members were going home to deal with all the stages of overwhelming grief with feelings of denial, confusion, anger and depression. Unfortunately, I also knew they likely would have to deal with a mental health system possessing very few clues as to how to help them. This is not surprising, because more than 6,500 deceased service members have left behind parents, spouses and children to cope in the aftermath of their death.

However, a bit of hope may be on the horizon. The Department of Defense has approved a groundbreaking study examining the unique grieving process of survivors. The National Military Family Bereavement Study is not only asking participants to complete a detailed questionnaire, but also to submit saliva samples for the purposes of DNA testing. The results of this five-year study will serve to shape national policies regarding mental health services for generations of military families. According to its website:

This study's findings will help to provide a scientific basis to inform policies effecting survivor care. This study seeks to better understand the impact of a service member's death on his or her family of origin and family of procreation. The study investigates the impact of community support and services on the bereaved and how available resources impact resilience or vulnerability in surviving families. Finally, this study builds on the growing evidence addressing the intersection of grief and trauma and its effects on military family member's bereavement process.


As for the optional DNA testing, its purpose is to identify biomarkers indicating how an individual grieves. For example, some survivors develop "complicated grief," and are unable to move through the phases of grief without a great deal of severity. In other words, a person may be predisposed to severe grief by their genetic makeup, and this cutting-edge science will allegedly provide clues. Another major difference in this study is that it is seeking participants from military families who are dealing with every cause of death resulting since 9/11.

This could be a positive step, according to Tracy Shue, founder of the organization Military Families for Justice, who believes that in addition to genetics, another contributing factor to complicated grief is the manner in which bereaved families are treated by the military justice system when they voice opposition to cause of death findings. She hopes all grieving family members will take the questionnaire, but suggests they use their own best judgment before submitting DNA: "This study is an opportunity for all bereaved military families to voice their grief, anger and frustration with an unfair Military System of Justice that has failed in providing them the necessary answers to appropriately grieve their loss and find closure."

The DNA aspect is not without its critics. Those interested in the study have expressed concern about how their DNA will be used, especially if they possess the biomarker that allegedly predisposes them to complicated grief. The website addresses these concerns in a list of frequently asked questions. Personally, I would not want to give my DNA to any government entity, as there are countless ways it can be leaked and misused.

It is rare for the Department of Defense to ask anyone how they feel in an effort to shape its policies. Maybe this is a positive step toward building a stronger military community and a stronger nation as a whole. Maybe in the future, when a folded flag is presented to a deceased veteran's next of kin, it won't also be the moment when the military's guidance and protection ends.