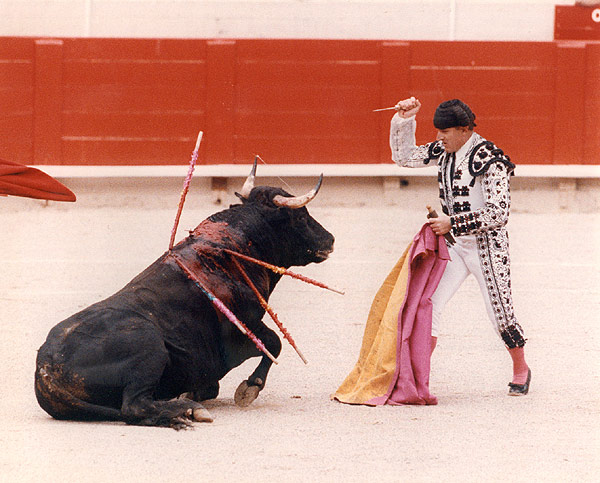 The French tourism industry doesn't really want you to know about it. You won't find it anywhere on the official French government tourist office website. France is a civilized country, known as the culture capital of the world, right? But did you know that the act of torturing an animal to death was successfully elevated in status to "culture" and "art" by French lawmakers? Yes, it's true--the French government, a handful of celebrities including tax fugitive Gérard Depardieu and thousands of deluded sadists using "tradition" as an excuse, are complicit in some of the most horrific animal abuse in the world--bullfighting.

Technically, the blood sport is illegal in France, punishable for up to two years in prison but bullfighting has been granted a special judicial status-- a cultural exemption in southern regions with a tradition of bullfighting. In those specified exempted areas, the torture and killing of bulls and calves for entertainment is legal. French lawmakers are using the "tradition" exemption they created in order to avoid having to take a stand against the immorality of bullfighting and risk losing the votes of pro-bullfighting constituents. Because the legislators' stance is passive, it doesn't look like pandering but it is. Most lawmakers treat the subject of bullfighting like it's radioactive, evading an open debate in the senate. But that's all about to change.

The anti-bullfighting movement is growing and lately the protests have been marred by violence. Peaceful anti-corrida activists have been subjected to water hoses and have been beaten by "aficionados"--one activist was beaten into a coma. Female activists have been dragged by their hair, punched and had their bras torn off by pro-bullfighting thugs. The videos of the protests provide evidence of criminal battery by civilians and of police brutality on peaceful animal rights activists. Police swat teams are seen protecting the bullfight business instead of protecting peaceful demonstrators from violent attacks. Charges have been filed and court dates are set. 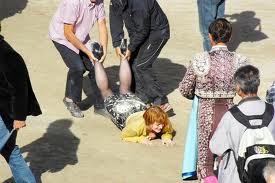 As a result of effective direct action campaigns inside and outside the arenas, France's Green Party declared last week that it would be bringing the issue to parliament in the form of a bill outlawing the practice entirely.

If you're curious about the brutality of a bullfight, get your hankie and check out a "Corrida" on YouTube. Unless you're a sociopath, you'll be appalled at all the elaborately choreographed and Psycho-style stabbing and you'll cringe hearing the pleading cries of the injured animals. Orchestras are there to drown out the animals' cries and perversely, to set the drama to music. It's plenty dramatic but no one is acting. The killers are real--and so is the pain. The crowd is visibly macho, low rent, with lots of jeering and fist pumping. There's blood--lots of it--and Torquemada-style dismemberment too.

During the so-called cultural event, matadors and their "assistants," dressed in spandex and sequins, repeatedly taunt and stab bulls and calves until they finally collapse, exhausted, in agony, bleeding out--stabbed to death in front a jeering mob. By any standard, it's torture.

And as if that wasn't bad enough, out of view, before the so-called artistic show, the animals are tortured for several days to render them incapable of defending themselves. They put Vaseline in the bulls' eyes so they can't see their torturers. The details of the way bulls and calves are readied for the ring is right out of a medieval dungeon instruction manual, with specialized bull-torturing instruments.

"The bull is not an aggressive animal, and the reason he is angry and attempts to charge at the matador whilst in the bullring is mainly because he has been horrendously abused for the previous two days. In fact, what spectators see is not a normal, healthy bull, but a weakened, half-blinded and mentally destroyed version, whose chances of harming his tormentors is virtually nil. The bull has wet newspapers stuffed into his ears; Vaseline is rubbed into his eyes to blur his vision; cotton is stuffed up his nostrils to cut off his respiration and a needle is stuck into his genitals. Also, a strong caustic solution is rubbed onto his legs which throws him off balance. This also keeps him from lying down on the ground. In addition to this, drugs are administered to pep him up or slow him down, and strong laxatives are added to his feed to further incapacitate him. He is kept in a dark box for a couple of days before he faces the ring: the purpose of this is to disorientate him. When he is let out of the box, he runs desperately towards the light at the end of the tunnel. He thinks that at last his suffering is over and he is being set free -- instead, he runs into the bullring to face his killers and a jeering mob."

This is the only form of animal abuse that has absolutely no reasonable excuse--no excuse of harming animals for science, medicine, for warmth or food. They are torturing animals for fun and this is why I am putting my life on the line to attend the next protest.

In Rodilhan, on October 27, sadists will torture two bulls and two calves to death. It's a small town of in southern France, right outside Nimes--a four hour drive each way from Nice but I can't not go.

For the animal rights movement, Rodilhan is ground zero. This is our Birmingham, our march on Selma.

I'll be going with friends--American and French, joining Alliance Anti-Corrida, CRAC Europe and other animal rights organizations. We'll be marching under the flag of Friends of Animals, an international animal protection organization. We will march for peace and an end to the violence inflicted on animals. We plan to be a thousand strong.

If they hit us, we are not to hit back. We must be beyond reproach; we will remain non-violent.
I'm really scared. I watch videos of Martin Luther King to gain courage. I listen to his words and repeat them under my breath.

I will wear my hair in a braid inside a bicycle helmet so thugs can't pull me by the hair or hurt my head if they punch me. I will wear gloves, heavy protective clothing and strong boots. But I can't not go. I didn't come to France to cry over the blood of tortured bulls. I came for other reasons. But I cannot stand by and let this happen.

Look what happened to my fellow activists last time in Rodilhan. For an animal rights advocate, or for anyone who cares about animals, all roads lead to Rodilhan on October 27.