BERKELEY, Calif. (AP) — A group of Irish and Irish-American young men and women were enjoying their last blast summer in California before cracking down with college and careers, a rite of passage tens of thousands from the Emerald Isle have taken over the past five decades.

At a 21st birthday party early Tuesday morning, a fifth floor balcony broke loose from a stucco apartment house, tossing 13 people about 50 feet onto the pavement and stealing those adventures. Six people were killed and seven seriously injured.

"For many of my countrymen this is a favorite experience and to have this happen at the start of the season has left us frozen in shock," said Ireland's San Francisco-based Consul General Philip Grant.

"My heart breaks for the parents," said Prime Minister Enda Kenny from Dublin. 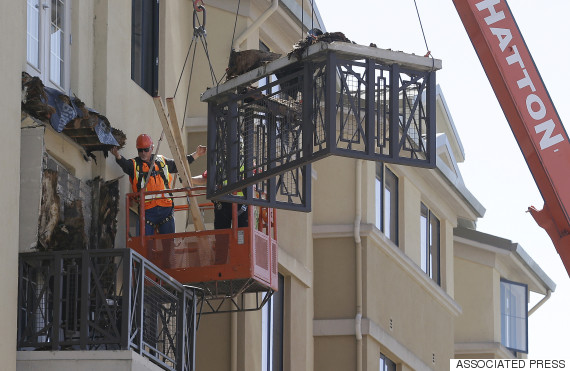 Workers remove part of a balcony that collapsed at the Library Gardens apartment complex in Berkeley, Calif., Tuesday, June 16, 2015. Berkeley police say several people are dead and others injured after the balcony fell near the University of California, Berkeley. (AP Photo/Jeff Chiu)

Word of the tragedy spread quickly back to Ireland, and phone lines lit up as panicked parents called to check on their kids throughout the San Francisco Bay Area.

Sam McCarthy, 21, who was not at the party, said his mother, who called at 4 a.m., was reassured to know he and the fraternity houseful of 30 co-ed Irish and American roommates was safe.

McCarthy said he was shocked by the news, and had come for a fun, independent summer.

"I thought it would be a cool experience," said McCarthy, who works at Bay City Bike Rentals and Tours in San Francisco.

Police had received a complaint about a loud party in the apartment about an hour before the mishap but were still on a different call when the metal-rail balcony gave way just after 12:30 a.m. It landed on the fourth-floor balcony just beneath it, leaving the pavement strewn with rubble and the red plastic cups that are standard at college parties. 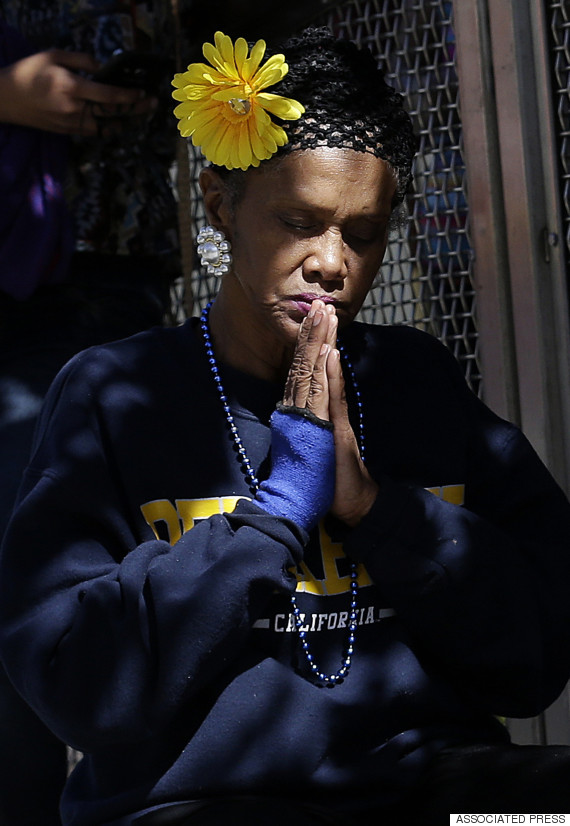 Mary Elzy says a prayer for victims of a balcony that collapsed in Berkeley, Calif., Tuesday, June 16, 2015. Berkeley police said several people were killed and others injured after a balcony fell shortly before 1 a.m., near the University of California, Berkeley. (AP Photo/Jeff Chiu)

The U.S. government's J-1 program brings 100,000 college students to this country every year, many of them landing jobs at resorts, summer camps and other attractions. The San Francisco Bay area is especially popular with Irish students, about 700 of whom are working and playing here this summer, according to Ireland's Philip Grant. Many work at Fisherman's Wharf and other tourist sites.

Sinead Loftus, 21, who attends Trinity College Dublin, said Berkeley is "the Irish hub." In fact, she said, "I've heard people complain there are too many people from Ireland here."

Investigators will look at such things as whether the balcony was built to code, whether it was overloaded and whether rain or other weather weakened it, said Kevin Moore, chairman of the structural standards committee of the Structural Engineers Association of California.

Berkeley officials said the building code at the time of construction required the balcony hold at least 60 pounds per square foot. That requirement has since been raised to 100 pounds.

Berkeley spokesman Matthai Chakko said officials have not measured the balcony to find out how big it was and how much weight it was built to bear based on the 60-pound per square foot standard in place when the building went up. Chakko also said there is no city requirement to post a weight restriction for balconies in apartments.

Grace Kang, a structural engineer and spokeswoman for Pacific Earthquake Engineering Research Center at Berkeley, said the balcony's dimensions looked to her to be 4 by 6 feet, or 24 square feet.

That would mean the balcony should hold at least 1,440 pounds, a total that likely would have been exceeded by 13 adults. "They were packed like sardines, and then they were moving," she said. When people are moving it "may further exacerbate" the strain.

Also, the apartment house was a wood-frame construction, and the balcony was cantilevered out from the building, with no additional support beneath. Both can make a balcony more vulnerable to dry rot and weathering in general, Kang said.

Engineering crews inspected jagged broken beams of wood sticking from the building, marking where the balcony had snapped off. Pieces of wood came away, falling to the ground as the engineers touched them.

City inspectors barred use of the building's other balconies during the investigation.

The Library Gardens apartments, completed in 2007, is in a lively part of downtown Berkeley. Several tenants reached by telephone said it is well-maintained.

In statements, building owner BlackRock and manager Greystar extended condolences to the victims' families and said safety was a priority.

On the closed street below, a shrine was growing: flowers, a pack of cigarettes, a Cal Berkeley banner, condolence notes. Victims' relatives were expected to begin arriving from Ireland on Tuesday night.

A 2010 Associated Press investigation of the J-1 program and the companies that arrange the visits found that many students paid thousands of dollars to come to the U.S., only to learn the jobs they were promised didn't exist. Some had to share beds in crowded houses or filthy apartments. 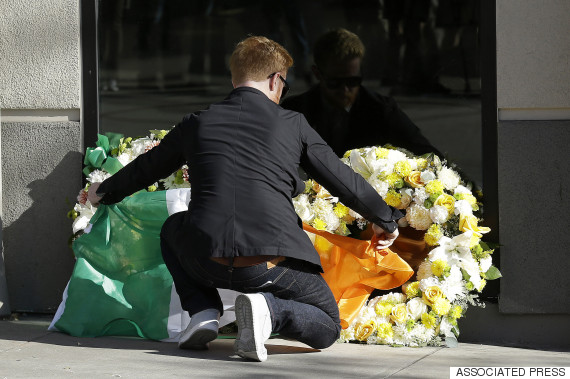 Neil Sands of the Irish Network Bay Area places a flag of Ireland over wreaths at the Library Gardens apartment complex in Berkeley, Calif., Tuesday, June 16, 2015. Berkeley police say several people are dead and others injured after a balcony fell shortly before 1 a.m., near the University of California, Berkeley. (AP Photo/Jeff Chiu) 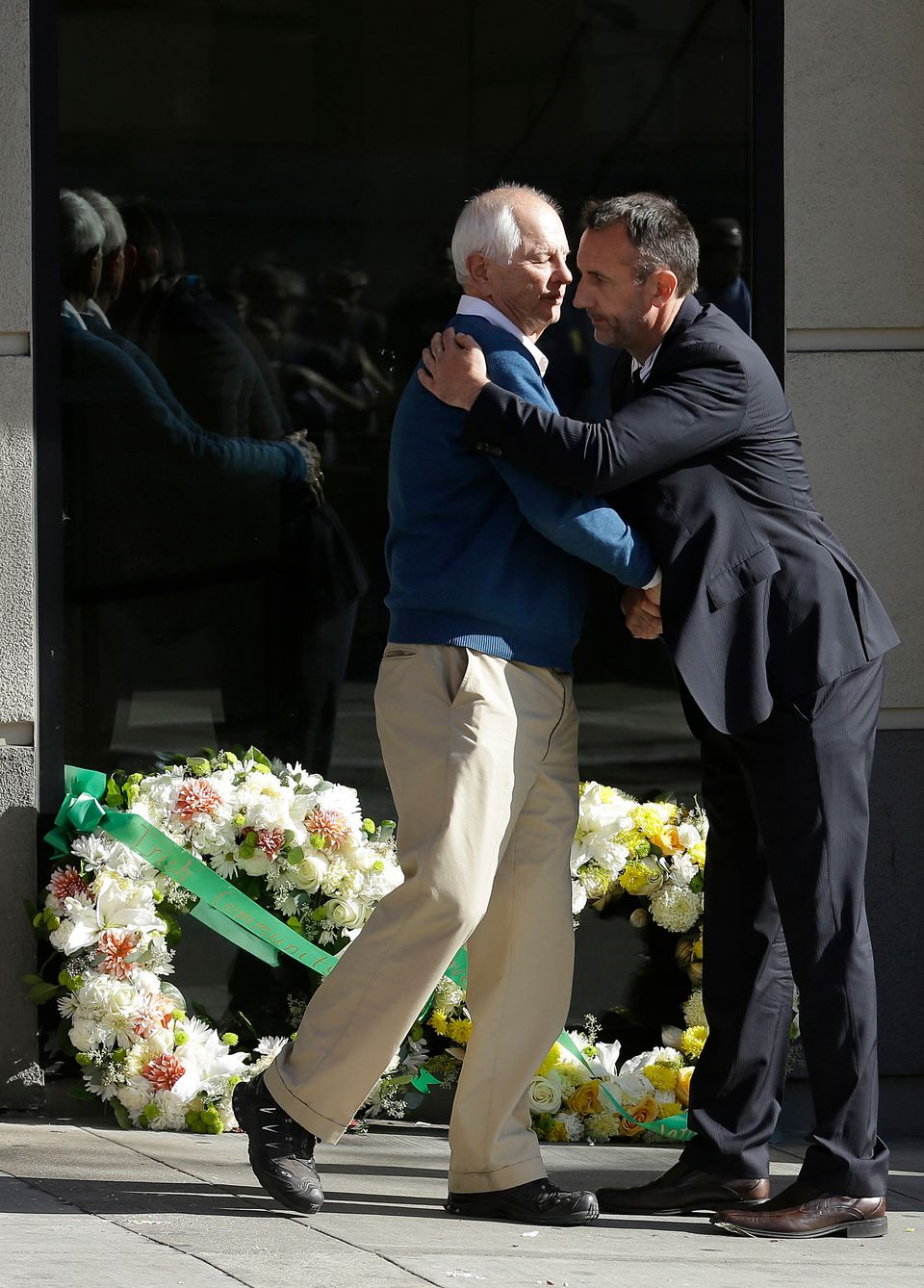