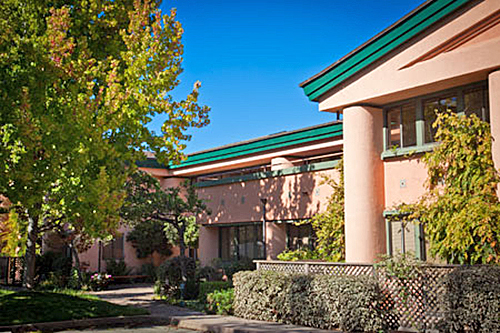 Berkeley Rep's campus on Harrison Street: a home for many functions. Photos by Cheshire Isaacs

As a novice reviewer of Bay Area theater in the late '60s, I probably dropped in on Berkeley Rep for the first time in early 1969, possibly to cover its production of Brendan Behan's The Hostage. At least that show's program is the earliest that I could locate in a tightly packed file cabinet.

The company, which opened its doors the previous fall, was a tiny upstart, housed in a converted green-grocers shop on College Avenue. Its playhouse had proportions that are typical of small urban stores, narrow in street frontage but relatively deep.

To call the facility primitive might be an overstatement: Actors making exits and entrances on opposite sides of the stage had to dash through a narrow alley to get from one side to the other. On a couple of nights -- not many, to be sure -- I sat through shows in which performers had to compete with the slightly distracting drip-drip-drip of raindrops sneaking through a leaking roof into tin cans that had been set out to catch them.

But the rudimentary setting didn't really matter, and neither did the theater's low-budget sets, costumes and props. Founding artistic director Michael Liebert and his associates did quality work. They earned respect and support. And Berkeley Rep thrived. By 1980 it had moved downtown into its own brand new theater, bringing all its operations under a single roof, a site that was expected to suffice far into the future.

Then success intervened. More space was needed. And aspects of production, administration and an educational program had to move into scattered rental quarters.

Berkeley Rep is still thriving, but at an enormously larger scale. The company operates two theaters -- the 700-seat Roda and the 1980 addition, the 400-seat Thrust Stage -- adjacent to each other on Addison Street in the city's center. Its current season of seven plays includes four world or regional premieres, two next-to-new shows and one of Shakespeare's least-staged works, presumably in a fresh interpretation. 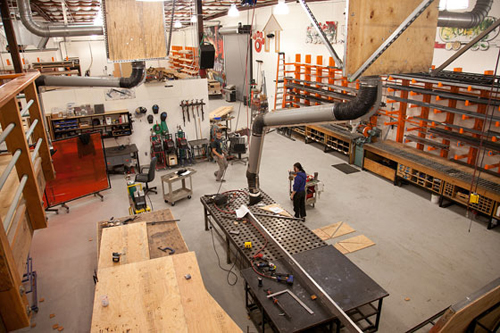 According to the theater's statistics, those productions, plus such peripheral activities as a wide-ranging school program and a new workshop for playwrights and their collaborators, will involve some 400 artists, artisans and administrators, plus about 1,000 volunteers and a budget of $12.5 million for the season.

But scale and a reputation for quality bring challenges as well as blessings.

Until a few months ago, the company's functions were dispersed around Berkeley and Oakland: Rehearsal studios in one location, scene shop in another, costumes and props and other operational resources still elsewhere.

Just about everything the company needs has been brought together in a marvelous new facility at 999 Harrison St. in West Berkeley. That adjective is mine, the result of a personal tour guided by Berkeley Rep's public relations director, Terence Keane.

Yes, we know that PR folks have been known to deal in snow jobs. But I'm a born skeptic, reared in cynical New York. And Keane didn't snow: He just took a walk through the building -- a mere 62,000 square feet -- noting its history and pointing out the components of a factory made for theatrical art.

That history started in 1983, when it was designed and built for The North Face, the outdoor equipment company; subtle reminders of that origin can still be found in the firm's Half-Dome-look logos around the building and on the grounds. 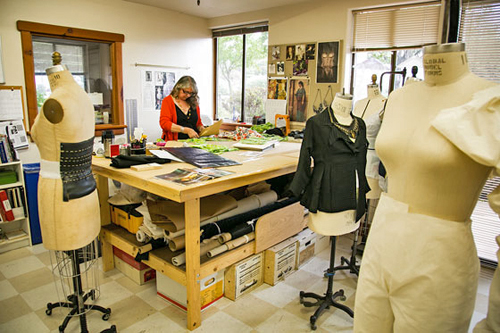 Architectural mavens might call the design neoclassical-light, thanks to the columns and pediment along its Harrison Street frontage, but the interior shouts of environmentalist-heavy, befitting a business dedicated to outdoor adventuring. Sprawling windows and huge skylights allow natural light to flood virtually the entire structure. They also contribute to efficient heating and cooling, Keane says.

That's just fine with Berkeley Rep, even if its business model calls for luring crowds into darkened rooms.

North Face fairly quickly outgrew the building, then was succeeded by the publisher 10-Speed Press for about a decade. The site was vacant when Berkeley Rep's people discovered it a few years ago, in a search that was prompted largely by a 2005 fire that destroyed its scene shop and by the company's long-held hope of putting all its resources under a single roof once more.

When the national and regional economy tanked, throwing real-estate prices and mortgage interest rates into free-fall, the time to buy was right. That was slightly over two years ago.

Without going into details, Keane says the theater received a good deal from an owner who "was eager to see someone move in that was really part of the community." The move made economic sense, too: By the company's estimate, the consolidation is expected to save about $250,000 in facility costs.

The campaign to pay for the building and its improvements is continuing, but the move is already paying dividends that can't be measured in dollars.

One took place last summer, even before the space was fully ready for operation.

For four weeks, up to 100 playwrights, directors, actors and others gathered in the Harrison Avenue cubicles, offices and meeting rooms to exchange ideas and pursue theatrical ventures.

If that sounds fuzzy, it's no accident. "We don't require something to come of it," Keane says. "We don't even require an artist to hold a reading or performance at the end. We feel the pressure of presentation can change the creative process."

How well the project worked can be inferred from a the fact that some 300 theater artists have applied to take part in a similar workshop next summer. That's 100 more than last year.

One of the past summer's projects will receive its world premiere next month in the Thrust Theater. It's called Troublemaker, written by Dan LeFranc and directed by Lila Neugebauer.

The play had been commissioned by Berkeley Rep, and was already earmarked for the season, but the workshop allowed the company's staff to take part intimately in its development. 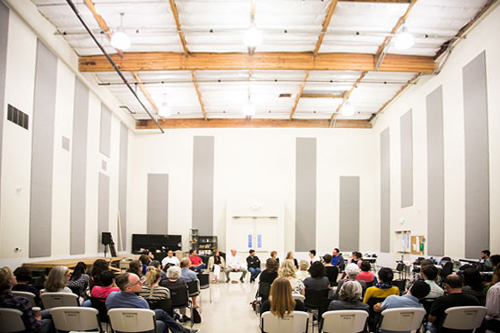 An invited audience listens to a reading in the main rehearsal hall.

That production, like everything in the current season, will be rehearsed and built at the Harrison Avenue facility, which the company calls a campus.

"Everything that happens before a show hits the stage happens here," Keane says.

And it happens with an ease that would have been unimaginable before the consolidation.

"There's the scene shop, the costume shop, the prop shop, rehearsal halls, the literary department, the business people, marketing people, fund-raisers, the leadership," he tells. "It has changed our connection to each other. There are people who I've seen more in our first six months here than in the six years before that."

Importantly, it has changed the connection among directors, designers and artisans who rarely saw each other.

Keane recalls an incident before the 2005 opening of Tony Kushner's operatic Brundibar and Comedy on the Bridge. The scenic centerpiece, a bridge, was constructed far from the rehearsal hall.

"When the singers got to the set, they discovered the steps were just way too steep for people to sing opera," Keane says. So it had to be rebuilt, close to opening night.

"That wouldn't happen now," he maintains. With performers, designers and builders in close and frequent contact, he says, "They'd see problems way in advance." 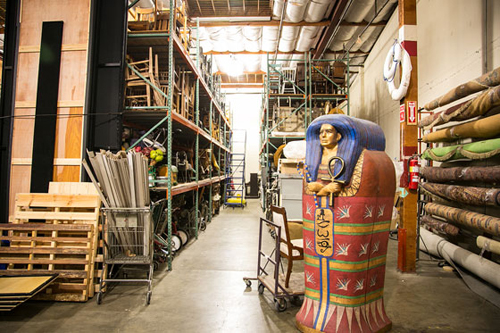 Need a chair, a rug, a sarcophagus? It in the prop storeroom.

Other avoidable glitches can easily involve stored props, for example.

"It used to be that a director might want a typewriter and the prop people would ask what kind, and then they'd bring over one or two the next day," he notes. If it wasn't right, the process might drag into another day, or longer, with uncertainty. "Now a director can just walk over and take pick one out."

By far the biggest space in the West Berkeley complex is the scene shop, some 30,000 square feet by Keane's estimate and about 30 feet tall by mine.

It boasts separate areas for metal work, wood work and painting, all served by overhead ventilation ducts that take "incredible amounts of power."

Among other virtues, the spaciousness allows a scenic artist to paint an entire backdrop in one place. That's new. "In the old site she had to paint one or two flats at a time and hope they would dry similarly," Keane notes. "Spray painting had to be done on the sidewalk because there was no ventilation."

"The goal will be to house artists here during rehearsals, then have them move close to the theater when the show goes up," Keane says. That process is expected to enhance communication and teamwork.

But the project is just one more dream for a theater that has done quite well at fulfilling its dreams.

At the moment its biggest task, aside from raising money in a tepid economy, is finding, choosing and mounting plays that will keep attracting and pleasing audiences.

The West Berkeley campus should certainly help that, Keane believes.

He won't go so far as to claim that the integrated facility has already had a visible impact on BRT productions.

"I think it's still developing," he says. But he has no doubt about its impact on artists, artisans and support staff working there. "It's done a lot for morale, for the sense of being a community, for collaborating."