November 9 marks the 25th anniversary of the fall of the Berlin Wall, the Cold War barrier that divided East and West Berlin for nearly three decades.

Responding to a question by an Italian journalist at a press conference on Nov. 9, 1989, Guenter Schabowski, the spokesman for East Germany's Central Committee, announced that East German citizens would be able to travel to the western part of the city. The unintentional comment caused thousands of East Germans to rush to the barricade, demanding to be allowed to cross.

Take a look at the incredible photos below from Nov. 9 and the turbulent days that followed. 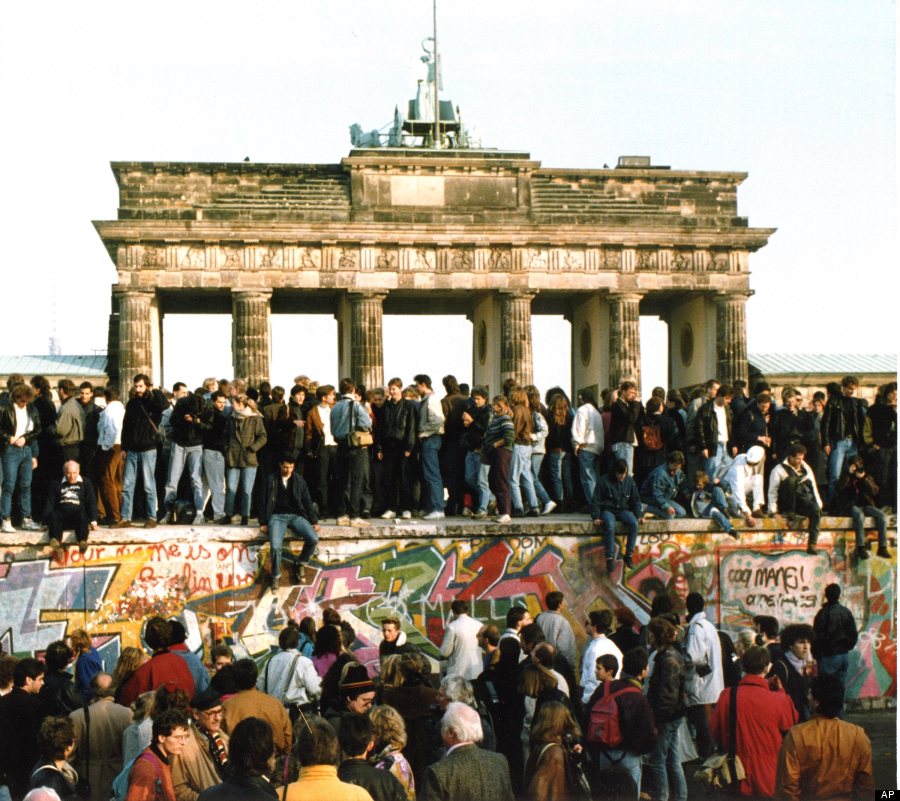 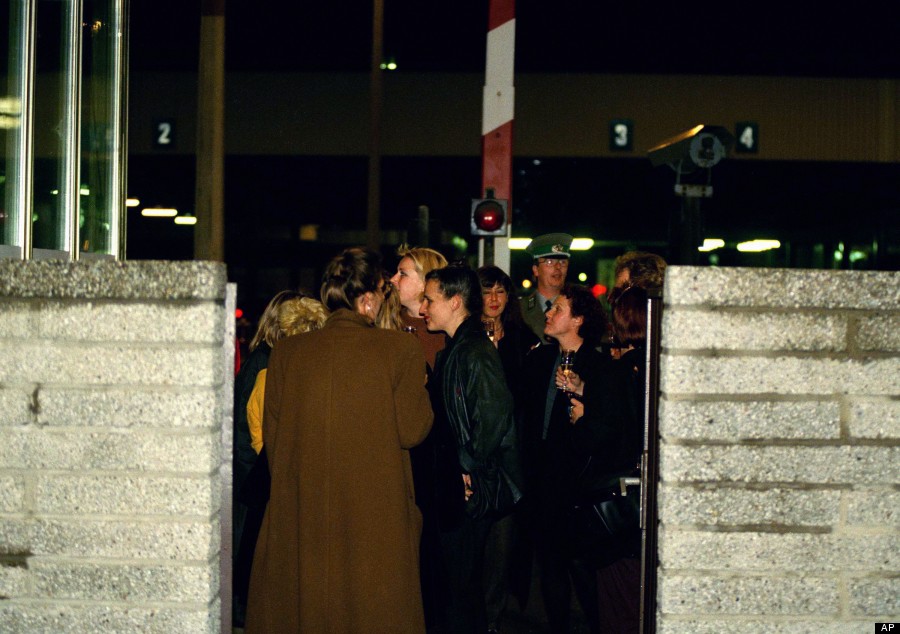 West Berlin citizens celebrate in the eastern part of the Checkpoint Charlie border crossing in West Berlin, Nov. 9, 1989, after the announcement by communist East Germany that it would open its borders to the west. (AP Photo/Lutz Schmidt) 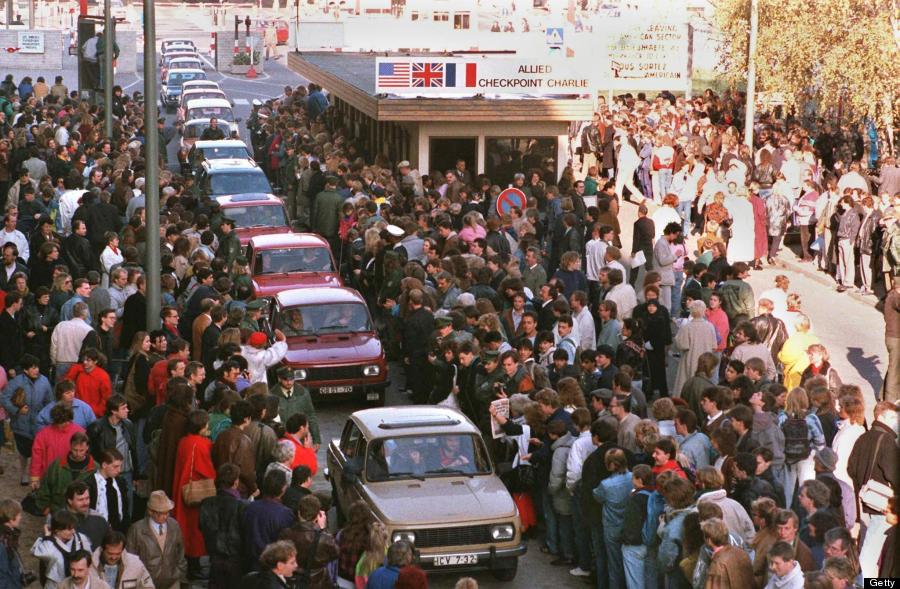 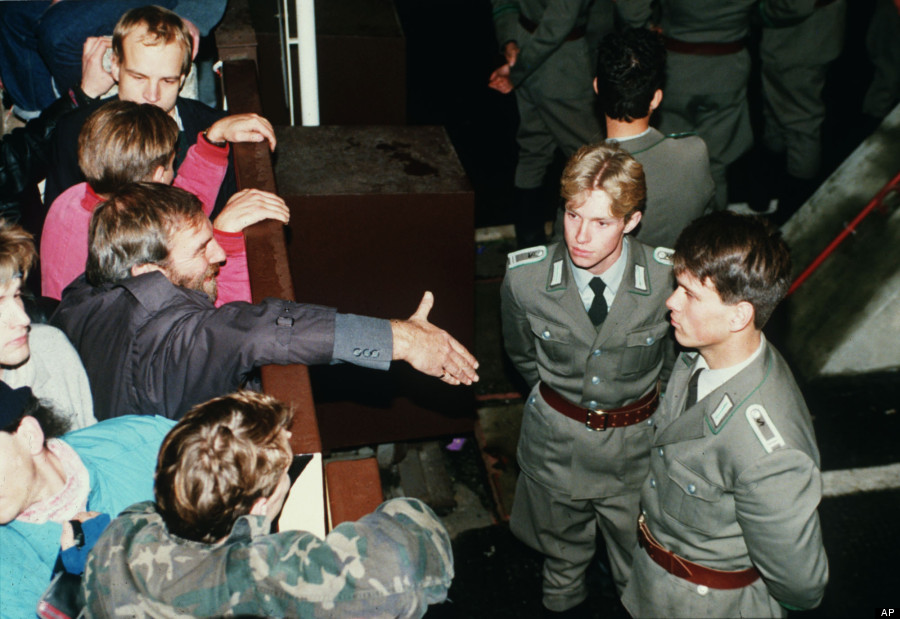 East German border policemen, right, refuse to shake hands with a Berliner who stretches out his hand over the border fence at the eastern site nearby Checkpoint Charlie border crossing point on Nov. 10, 1989. (AP Photo/Lutz Schmidt) 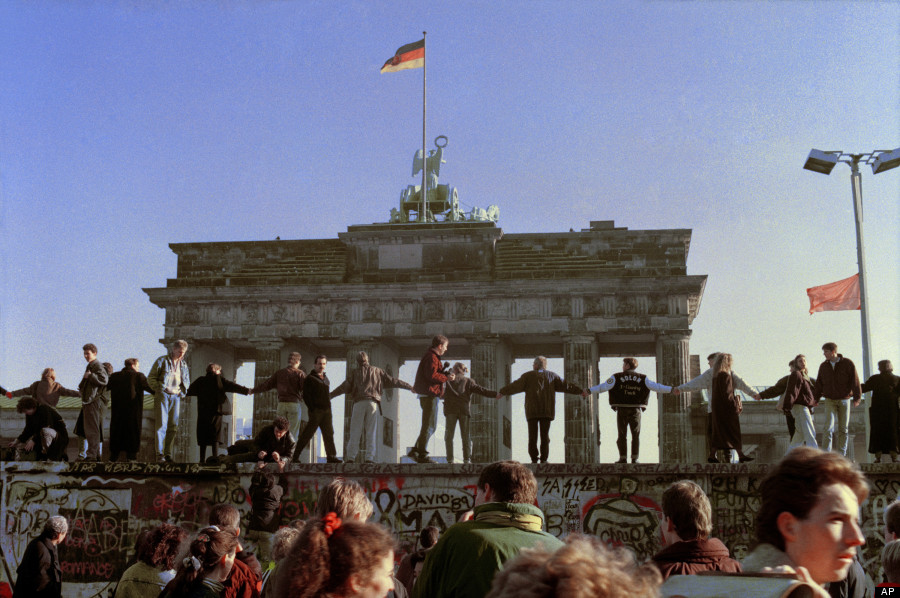 Berliners sing and dance on top of The Berlin Wall to celebrate the opening of East-West German borders in this Nov. 10, 1989 file picture. (AP Photo/Thomas Kienzle, File) 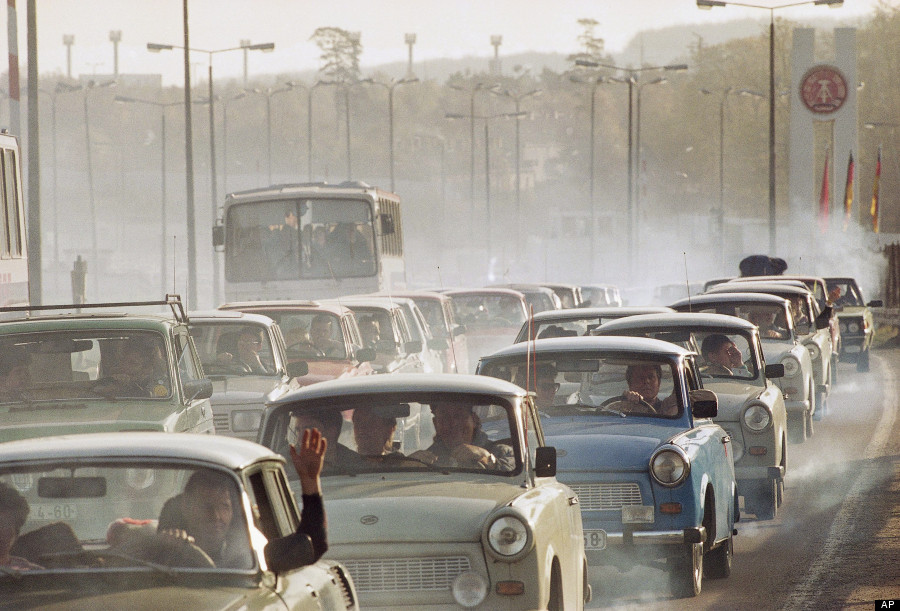 In a giant cloud of exhaust fumes of two-stroke engines, hundreds of East German cars wait bumper to bumper in front of the West German checkpoint Helmstedt to enter the west, Nov. 11, 1989. In front of the eastern checkpoint, the cars wait in line for a distance of 30-40 kilometers, a West German policeman said. The ride from Berlin to Helmstadt (about 200 kilometers) would last about 11 hours. (AP Photo/Claus Eckert) 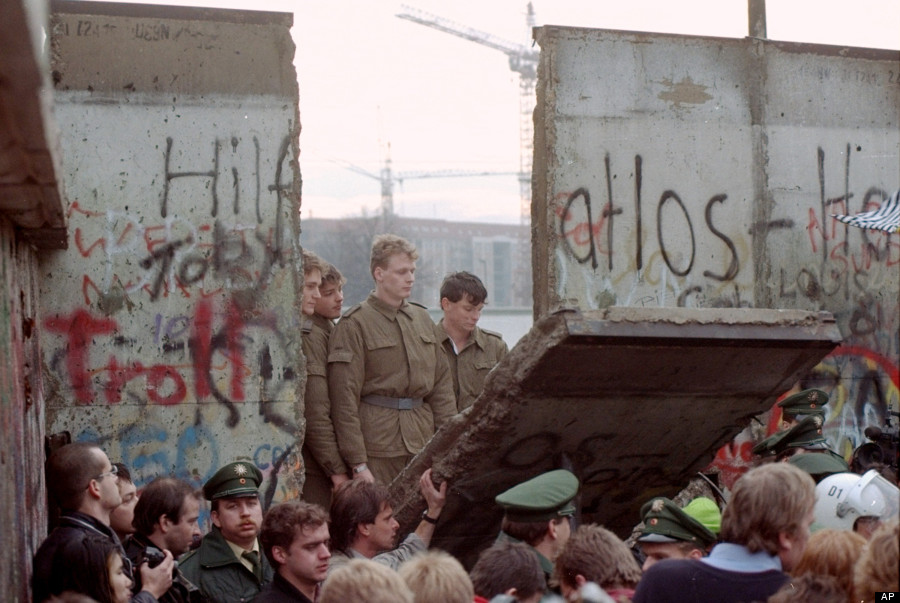 East German border guards look through a hole in the Berlin wall after demonstrators pulled down one segment of the wall at Brandenburg gate in this November 11, 1989 file picture. (AP Photo/Lionel Cironneau, File) 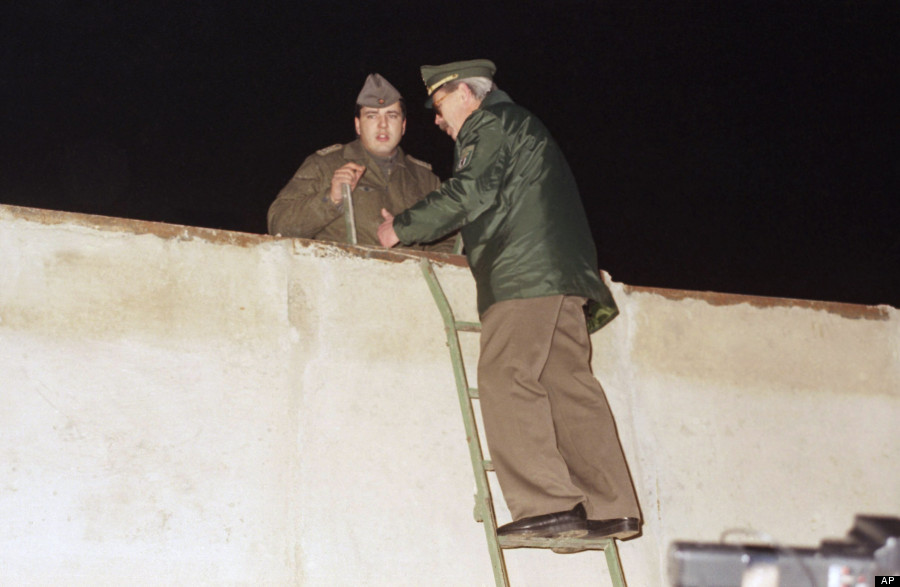 A West Berlin policeman, right, and an East German border guard stand on ladders while talking over the Berlin Wall at Bernauer Strasse in Berlin, Nov. 11, 1989, where East Germany began to pull down the wall early Saturday morning. (AP Photo) 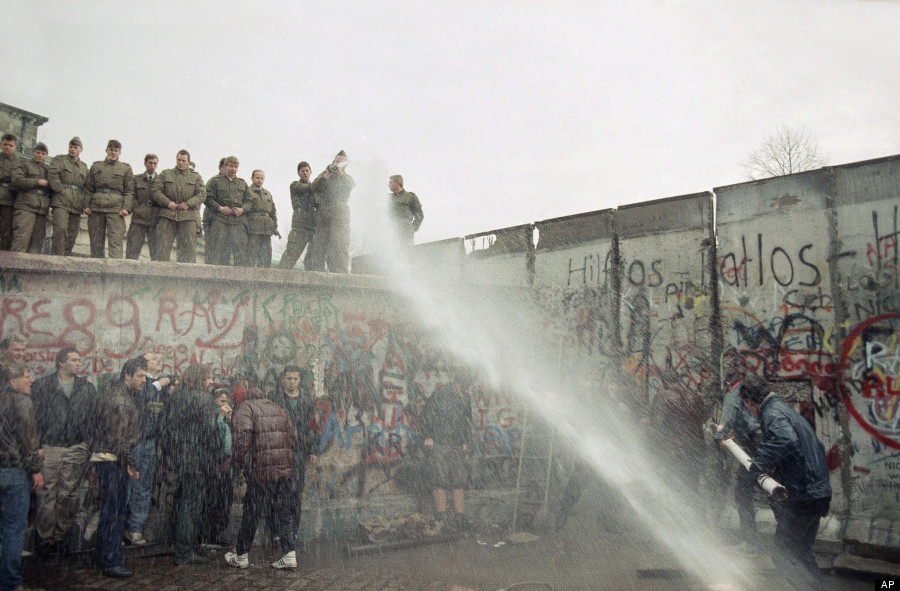 East German border guards use a hose to discourage West Berliners near Brandenburg gate, in Berlin, Nov. 11, 1989. The citizens from the west tried to demolish the wall, demanding it be pulled down. (AP Photo/Lionel Cironneau) 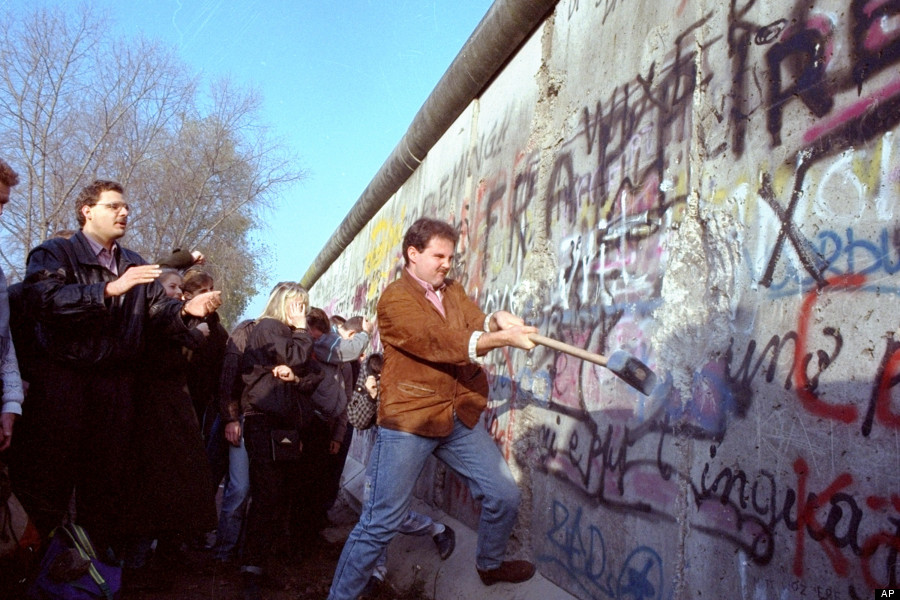 An unidentified West Berliner swings a sledgehammer, trying to destroy the Berlin Wall near Potsdamer Platz, on November 12, 1989, where a new passage was opened nearby. (AP Photo/John Gaps III) 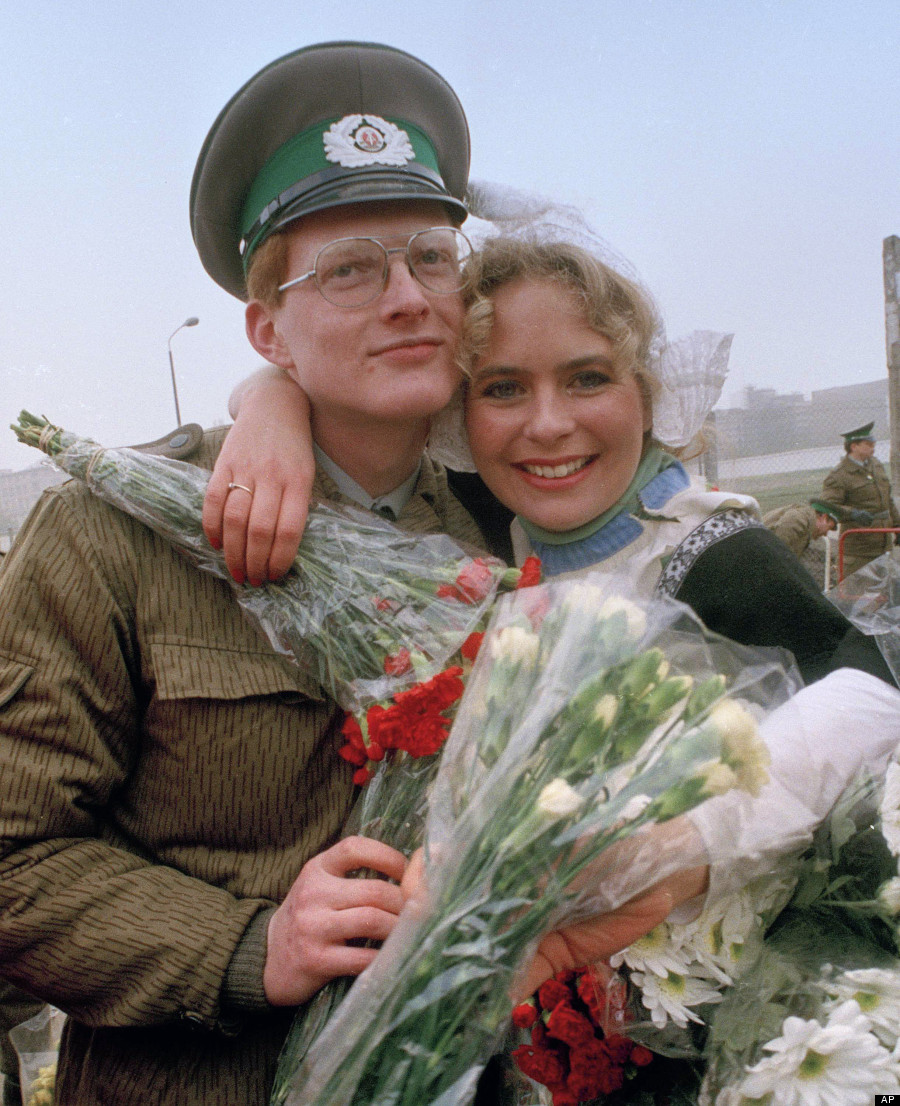 An East Berlin border guard is hugged by an unidentified Berliner at Potsdammer Platz, Nov. 12, 1989, when East Germany opened the wall to the west at this historical landmark. (AP Photo/Rainer Klostermeier) 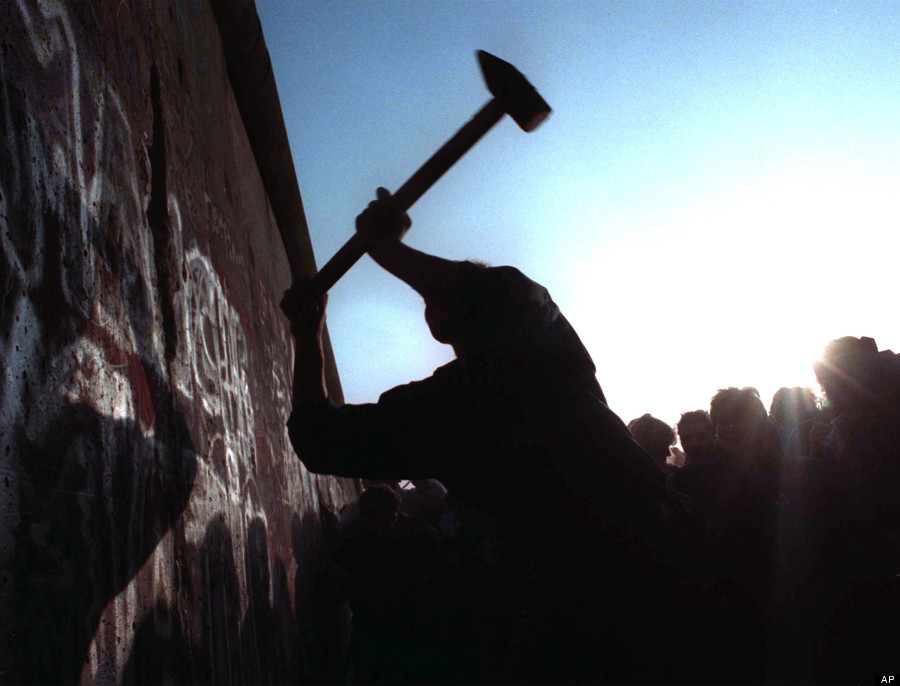 A man hammers away at the Berlin Wall, as the border barrier between East and West Germany was torn down after 28 years, in this Nov. 12, 1989 file picture. (AP Photo/John Gaps III, File) 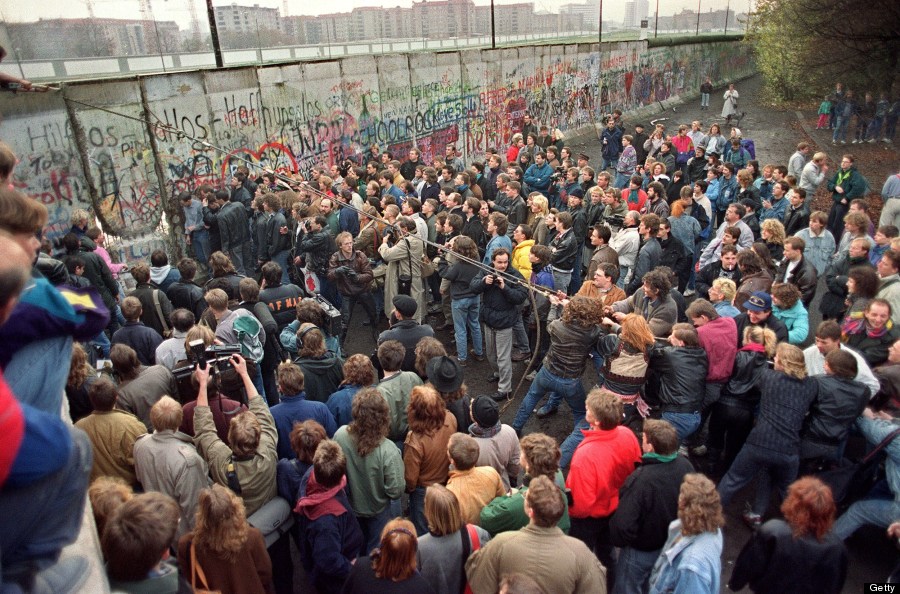 West Berliners crowd in front of the Berlin Wall early 11 November 1989 as they watch people trying to demolish a section of the wall in order to open a new crossing point between East and West Berlin, near the Potsdamer Square. (GERARD MALIE/AFP/Getty Images) 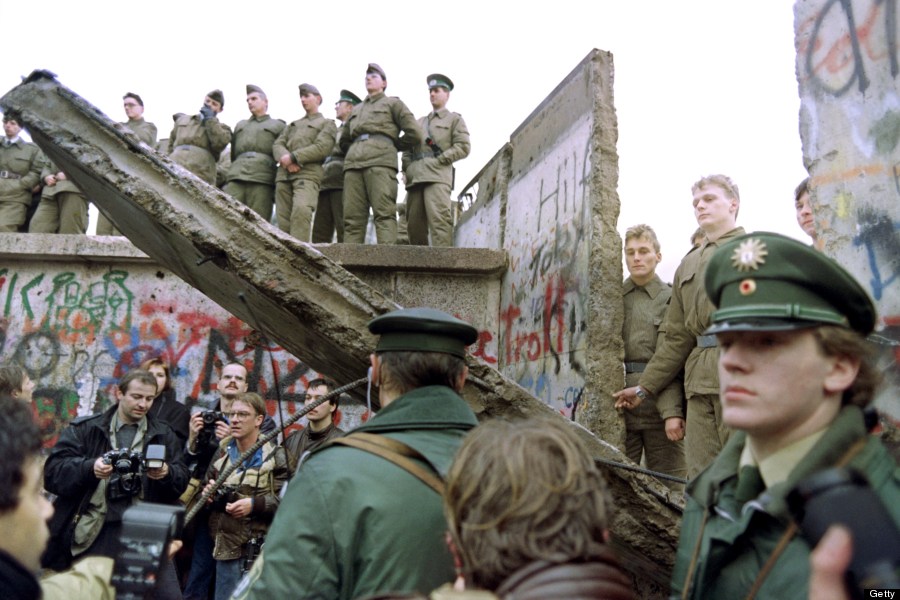 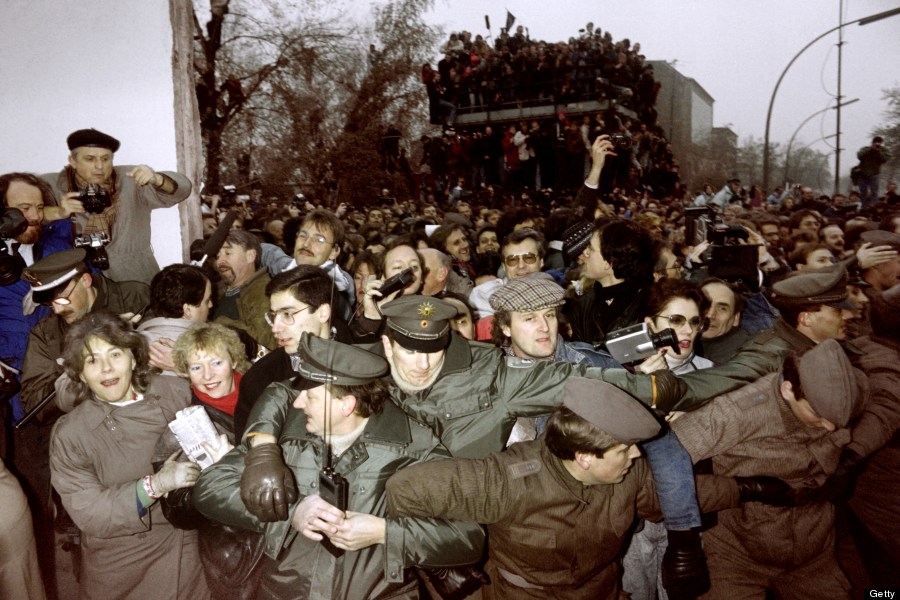 East and West German Police contain the crowd of East Berliners flowing through the recent opening made in the Berlin wall at Potsdamer Square, on November 12, 1989. (PATRICK HERTZOG/AFP/Getty Images) 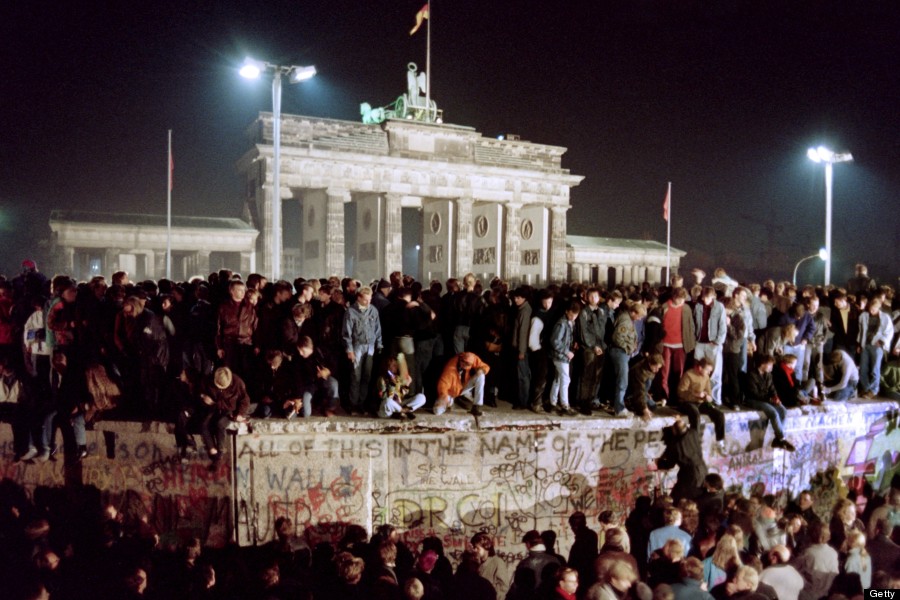 Thousands of young East Berliners crowd atop the Berlin Wall, near the Brandenburg Gate (background) on November 11, 1989. (GERARD MALIE/AFP/Getty Images)