On this day in 1989, residents of Berlin gathered on opposite sides of the concrete barrier that had divided them for nearly three decades and started tearing it down piece by piece. The wall that stood between East and West Berlin, between Communism and the West, would soon be no more.

But 25 years after the fall of the Berlin Wall, barriers around the world are still standing. They separate communities, countries and even entire continents.

To mark the anniversary of the historic events of Nov. 9, HuffPost editors from around the world described the seemingly insurmountable barriers that still surround them to this day.

Leaders around the world, the time has come to tear down these walls.

The Oct 23. picture featured below shows part of the 7.5 mile-fence in the city of Melilla that separates Spain from Morocco, Europe from Africa, prosperity from desperation. Ceuta, the other Spanish enclave in the Magreb, has its own barrier.

The separations were built in 1998 and at the time of construction they were simple, 2.5-meter tall cyclone fences, meant to control new arrivals of migrants, mostly from Sub-Saharan Africa. In the past years, successive governments have reinforced the fences: They have raised the height and added razor wire, several intermediate fences, sensors and detection cables, cameras, lights, etc…, that nonetheless don't dissuade those willing to risk everything to cross.

Many migrants try, but very few make it in the end. And there are other, more efficient methods to enter clandestinely. Not one migrant was able to cross the Ceuta fence in 2013, but 2,244 crossed the border by other means. In Melilla, where migrants often try to jump in groups, they had more success. Of the 2,638 that were able to enter Melilla illegally in 2013, more than 800 came across the barricade.

Spain's government has spent $72 million euros [$89 million] since 2005 to build and expand the two walls. The walls also seem impermeable to human rights, as humanitarian organizations like the European Council and the European Commission frequently complain. Footage has shown that the mistreatment of migrants. Immediate expulsions are habitual practices, as are the arguments from the government to justify this violation of national, international and European law. 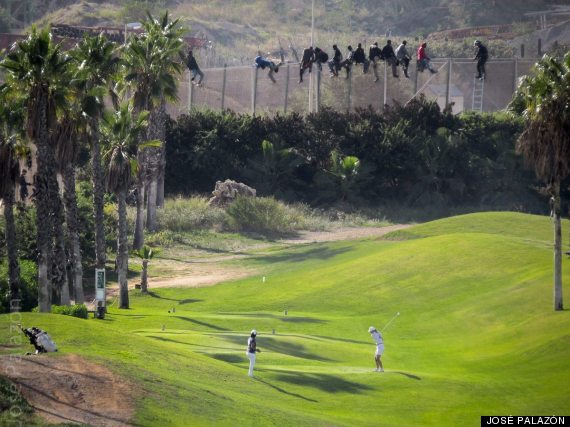 Migrants try to cross the border fence in Melilla near a golf course, Oct. 23, 2014.

While Canada is known as a multicultural nation, it has long been divided between English and-French speaking parts of and the fight by Quebec separatists for independence.

The issue of Quebec independence made international headlines in 1995 when the province voted in its second referendum to secede from Canada. The 1995 vote was narrowly lost by the separatists and since then, the question has been on the back burner. Less than 40 percent of Quebecois currently support the idea of secession. The pro-independence provincial Parti Quebecois was thrown out of power last April after a 18-month rule.

There are other divisions that are part of the Canadian fabric. Disparities in riches between the provinces have created a "have" and "have not" division. And Canada’s aboriginal communities, known as First Nations, have been fighting for greater control of resources and governance. They've also been battling for reparations for past treatment. 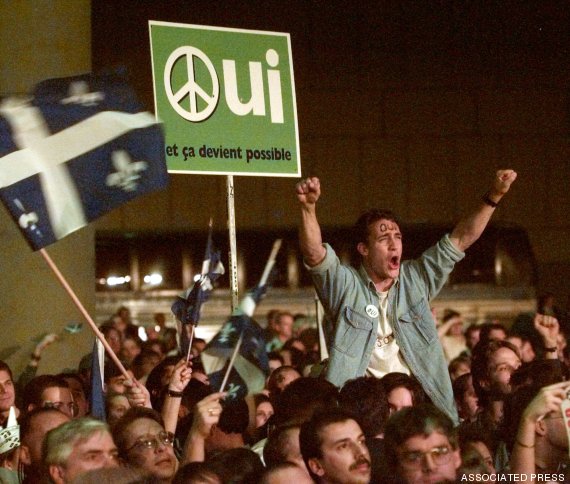 In September 2010, a Chinese fishing trawler collided with two Japanese Coast Guard patrol boats in the waters off the Senkaku/Diaoyu islands in the East China Sea. The clash over the Japan-controlled, China-claimed islands would bring down an "iron wall" between both nations, the world's second and third largest economies.

In response to China’s growing assertiveness over maritime territorial disputes, the Japanese government nationalized three of the contested islands in 2012, prompting Bejing to halt all high-level discussions with Tokyo.

China has since insisted that no political rapprochement is possible until the government of Japanese Prime Minister Shinzo Abe is willing to acknowledge the disputed status of the islands, and express remorse for Japanese actions in World War II. Japan, on the other hand, is unlikely to back down under Abe's nationalistic administration. The Japanese prime minister hopes to establish a "democratic security diamond" aligning Japan with like-minded countries such as Australia and India against Chinese aggression.

The territorial dispute has contributed to the worst period of Sino-Japanese relations since diplomatic ties were established in the 1970s. In a worrying escalation of the situation, China announced in November 2013 a unilateral Air Identification Zone (ADIZ) that overlaid parts of Japan's ADIZ.

However, in a hopeful sign, Japan's government announced on Nov. 7 that the country's prime minister will meet with Chinese President Xi Jinping on the sidelines of the Asia-Pacific Economic Cooperation forum summit, which is scheduled to begin on Nov. 10 in Beijing. 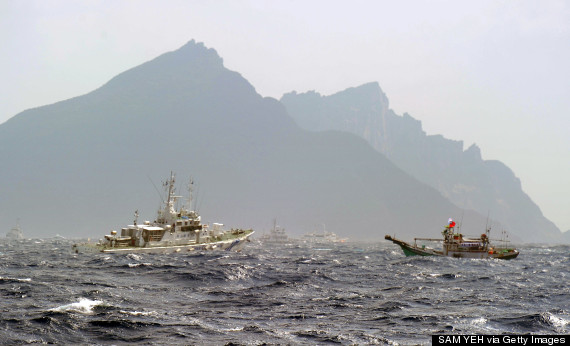 A Taiwan fishing boat (R) is blocked by a Japan Coast Guard (L) vessel near the disputed Diaoyu/Senkaku islands on Sept. 25, 2012.

The barrier between North and South Korea is as high as ever.

Officially in a state of armistice, the two powers are separated by a 154-mile Military Demarcation Line (MDL). For the past 61 years -- 24 hours a day, 365 days a year -- heavily armed forces have stood face to face on both sides of the line.

Residents of the South and North cannot cross the mighty barrier freely and an absolute majority of South and North Koreans has never made the trip. Traveling across the border requires special authorization from the government, which is only granted on extremely rare occasions.

The barrier does not just separate Koreans physically. It's impossible to write letters or make phone calls to the other side of the MDL, a limitation that applies to the Internet as well. North Korean websites aren't even accessible from the South.

Many families have been separated during the chaos of the Korean War and have yet to be reunited. Some “separated families” lived for decades without knowing whether their family members were alive. Up until today, no one knows when they will be reunited.

After 60 years, the Koreas are no longer the one country they used to be. The social systems vastly defer from each other just as their cultures have grown apart. Even the spoken language started to develop differently.

These days, many South Koreans question whether unifications should still be a goal -- a question that was unfathomable back in the days. A significant number of southerners, especially from the younger generation, believe that unifying with the poverty-stricken North would be a huge economic loss. 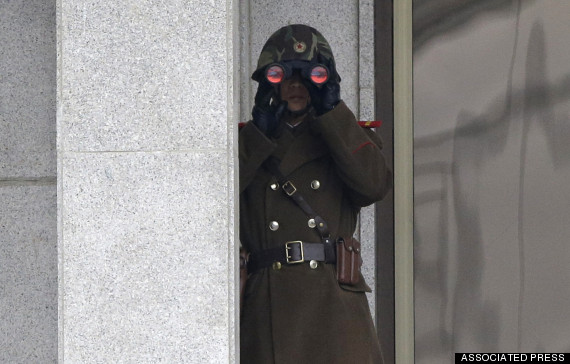 A North Korean soldier looks at the south side at the border village of Panmunjom, March 12, 2014.

The wall, one of dozens that divide the capital of Northern Ireland, is listed as one of the city's top attractions. Bus and cab tours regularly stop by and encourage tourists to scrawl their own messages on it. It has stood for 45 years, 17 longer than the Berlin Wall.

"Conflict tourism" has become a big industry for Belfast in recent years, in the same way tourists in Berlin can visit Checkpoint Charlie or buy what peddlers insist is a piece of the wall. But in Northern Ireland, it reflects a disconnect between outsiders - be they politicians or tourists - and people living with very recent memories of the violence.

The decades of bloodshed, officially and euphemistically dubbed "The Troubles" but sometimes simply just "The War", is over. The walls may look like monuments to the past to be graffitied and photographed, but for the people living in their shadows, sectarian strife between Protestant Unionists, who want Northern Ireland to stay British, and Catholic Nationalists, who want it to join the Irish Republic, is not a thing of the past. A 2012 study showed almost 70 percent living in "interface areas" near the walls feared for their safety without them.

Put simply, the walls prevent crossing between Protestant areas on one side and Catholic communities on the other. Some walls restrict access completely, while others use gates with limited opening hours to restrict movement. Segregation is less intense than it was around the time the first peace walls were built in 1969, when the British Army was sent in to Northern Ireland to keep the peace after rioting and began building temporary fences.

It is often reported the number of peace walls has increased in the last 20 years. But their actual number depends on the method of counting. Northern Ireland's Department of Justice administers 53, but a study counted 99 in Belfast, where the vast majority are. 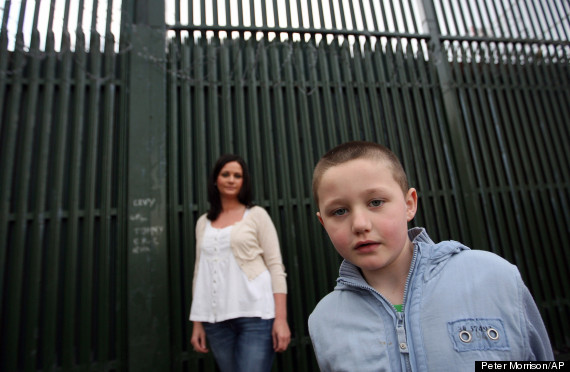 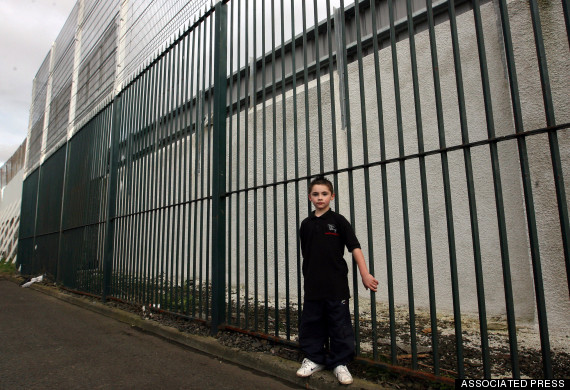 Above: Alison Quinn with her son Cein, 7, who live in the mainly Catholic lower Falls area of Belfast, Northern Ireland, are seen Wednesday, April, 10, 2008. Belowe: Protestant Lee Young, 8, lives barely 200 yards from Cein, but they probably will never meet. Their communities in Belfast's west inner city are separated by a peace wall. It's nearly 40 years old and 40 feet (12 meters) high.

One of the few places on earth where the First and Third worlds touch, the nearly 2,000-mile U.S.-Mexico border was once a much more open place than it is today. In Texas, the border runs along the Rio Grande River, which bisects a string of towns that once belonged to Mexico. People with family roots on either side of sister cities like Brownville-Matamoros, Laredo-Nuevo Laredo, or El Paso-Ciudad Juárez crossed routinely to work, go to school or see loved ones.

Though much fluidity remains, U.S. officials have increasingly closed off the border following recurring waves of mass migration from Mexico that began the 1980s and lasted through the early 2000s. As millions of Mexicans entered the U.S., both legally and illegally, American officials erected fences and walls to keep migrants out. Today, more than 550 miles of border fencing have been laid.

The growth of fencing in the highly trafficked corridors in Texas and California pushed migrants hoping to cross the border illegally into the desert between the Mexican state of Sonora and the U.S. state of Arizona. The danger of crossing through the desert, U.S. officials reasoned, would deter migrants from crossing illegally.

They were wrong. More than 2,100 migrants have died trying to cross through the desert since 2001, a figure more than 15 times larger than the 136 people who lost their lives attempting to cross the Berlin Wall from 1961 until its destruction in 1989. In 2009, an analysis by the American Civil Liberties Union found the risk of death while crossing the U.S.-Mexico border was 17 times higher than it was 10 years earlier.

Despite the fact that apprehensions for illegal crossings -- one way of measuring flows of illegal immigration -- have plummeted to about a quarter of their 1986 peak of 1.7 million, the U.S. immigration debate in Congress continues to focus on committing more resources to militarize the border, with border hawks pressing for additional fencing. 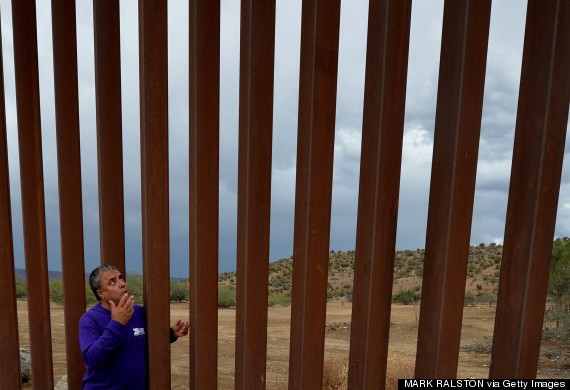 This photo taken on on August 21, 2014, shows Enrique Morones from the 'Border Angels' looking at the US-Mexico border fence at Jacumba, California.