On March 15th, Governor Bernanke gave an unprecedented interview to CBS. In it he lit a fuse of 'anger' against AIG. And then he retreated from the fray. Surprisingly, he is not a target of public anger. Instead that anger is aimed at the president.

This is an extraordinary turn of events, given a) that the Fed has a seat on the board of AIG; b) the Governor's personal share of responsibility for the chaos caused by AIG's reckless gambling these last seven years; and c) his responsibility for overseeing the US economy over the same period.

How has the Fed Chairman managed to avoid being the prime target of public anger?

First, let me remind you of the facts. Governor Bernanke served on the Academic Advisory Panel at the Federal Reserve Bank of New York from 1990-2002. In other words, Ben Bernanke was there as the Federal Reserve presided over, and, I would argue encouraged, the inflation of the biggest Credit Bubble in history.

If he had challenged the dominant orthodoxy of the Fed at the time, then I vouch he would not have become a member of the Board of Governors of the Fed from 2002 to 2005.

In other words over the period 2002 to 2009, Governor Bernanke has had a key and highly influential role as one of the 'guardians of the nation's finances' on the board of the Federal Reserve.

Over this same period, and under the watch of the Federal Reserve, AIG accumulated massive, and historically unprecedented liabilities -- a truly incomprehensible $62 trillion of liabilities. 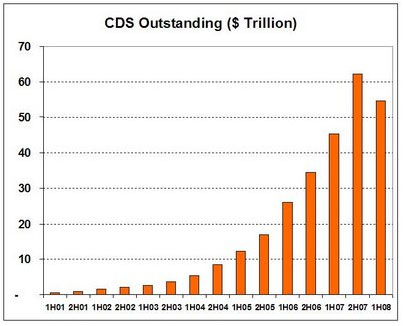 Regulators cheered on the 'innovation' of AIG's so-called 'swaps' (a term adopted to disguise the fact that CDSs are really just a form of non-collateralized insurance. Their nomenclature enabled them to dodge the 'asleep-at-the-wheel' regulator's radar).

The Fed and other regulators assured us constantly that sophisticated Wall St. financial products 'diversified risk' -- and made us all safer. But, as Gillian Tett of the Financial Times has cogently argued, they did the very opposite. They concentrated the risks many banks were taking, in one financial institution -- AIG.

Failing to understand the threat of this looming catastrophe was a major regulatory oversight. An oversight of historic proportions. An oversight that occurred on the watch of Ben Bernanke and other Federal Reserve governors.

Given this context, let us consider the extraordinary interview the Fed Governor gave CBS last week.

And let's remind ourselves: Fed Governors do not give TV interviews. When he breaks with all precedent and protocol, and goes public, then there can be no question. Something is up. We, the public, are being manipulated.

So it was that very little spontaneity emerged from the Governor's interview. His 'anger' at AIG, his 'slamming down' of the phone was, I contend, wholly contrived -- especially given the responsibility he shares for the bonus debacle as a board member of AIG.

The interview was just an opportunity, I would argue, to deflect attention from the Fed's negligence and whip up popular opinion against Liddy and the other buckin' broncos of AIG. In the macho style of Rodeo, the Fed Chairman was angrily slamming the barn door shut -- long after the bucking broncos had charged out of the barn, clutching bonuses.

Then the Fed Chairman deployed an extraordinary analogy. He compared the AIG gamblers to 'a neighbor that smoked in bed' and set his house on fire.

Would it not be wise for neighbors to call the fire brigade, he asked? Would there not be a risk to neighboring 'wooden houses' of leaving the neighbor's house to burn down? And would it not be better to put out the fire first, and then, and I quote 'change the fire code?'

'What needs to be done' he asked, without apparent irony 'to make sure this doesn't happen in the future? How can we fire proof our houses?'

Thus spoke a man with representation on the board of AIG.

By fueling anger over AIG bonuses, Bernanke is playing a very old game.

By aiming at AIG, he is distracting public anger from the Federal Reserve. He is protecting his reputation and legacy. (No Fed Chairman wants a legacy such as Greenspan's.)

And he is effectively channeling anger toward the White House.

From this perspective the timing and content of his TV interview was exemplary. It enabled him to 'dodge the bullets', and ensure that public anger was aimed instead at a newly-elected President.