Almost everyone knows that to "pull a Kanye" means to steal the limelight when it rightfully belongs elsewhere. With Sen. Dodd's suggestion that the Consumer Financial Protection Agency be housed in the Federal Reserve, it looked as if Ben Bernanke had successfully "pulled a Kanye" on an independent CFPA. But before Bernanke had time to say "Imma let you finish" to Elizabeth Warren, the Fed Chair was sideswiped by a group of Senators who want to strip away his authority over any but the largest banks.

Now we've got a real mess on our hands. If the CFPA is housed in the Fed, but the Fed doesn't regulate most American banks, how will American consumers get the protection they need?

Bernanke's Kanye move wasn't a spur-of-the-moment impulse. He's been in a self-seeking turf war with the Administration since at least July of 2009, arguing that consumer protection is inextricably linked to the Fed's role in supervising banks. But now, as the New York Times explains, "Several high-ranking members of the Senate Banking Committee have reached a tentative consensus on a plan that would strip the Federal Reserve of regulatory powers over all but the very largest banks." The Fed would not regulate the remaining 4,974 bank holding companies, or the 874 state-chartered member banks "that are members of the Fed system and that have a total of $1.7 trillion in assets."

Those 23 banks still under Fed supervision would control an enormous amount of money, of course. The "law of large numbers" dictates that those are the banks with the most influence over the economy. Ironically, the same Fed that failed to identify and manage the "too big to fail" problem would keep control over precisely those institutions that are, in fact, "too big to fail."

Not that the Administration sees a problem with that. According to Herb Allison, the Treasury official responsible for the bailout plan, ""There is no too-big-to-fail guarantee on the part of the U.S. government." To which any savvy banker will say: Yeah, right. Allison is claiming that big bankers no longer believe they'll be bailed out by taxpayers if they take crazy risks and things go wrong. That particular moral hazard has just vanished on his say-so.

This is, as Simon Johnson pointed out, "arrant ... nonsense" and a "disastrous performance." Does anybody really believe that the White House would let Goldman Sachs and JPMorganChase go down in a crisis? But it makes a great talking point in at least one sense: If there's no "too big to fail," then there's no problem leaving the folks who failed to avert the last "too big to fail" crisis in charge.

Ben Bernanke is, by all reports, a bright and congenial person. But the uncomfortable fact remains that, if he were a physician and not an economist, the citizens of the United States could probably sue him for malpractice. Instead he's running roughshod over consumer concerns in order to gain more turf for himself and his agency. He's clearly a good lobbyist, though, since he convinced Sen. Dodd to give him control over the CFPA even after Dodd called the Fed's oversight leading up to the crisis an "abysmal failure."

Sadly, consumers can't count on Bernanke to understand his management priorities. As Dean Baker pointed out, he told the Wall Street Journal that the Fed's "dual mandate" is "growth and inflation" when by law that mandate is actually "price stability" and "full employment." If Bernanke can forget the "employment" part of his mandate that easily, how will he remember to protect the American consumer?

All of this is still very much in play, of course. A number of Senators have blasted the idea of putting the CFPA inside the Fed. And now, with this new proposal to divide banking authority between the Fed and a new agency, the idea of housing consumer protection inside a Balkanized Federal Reserve makes even less sense.

As for the new division of authority being floated in the Senate, you guessed it: it's "bipartisan." According to the Times report, "Christopher J. Dodd of Connecticut, the Democratic chairman of the Banking Committee, and two other senators, Mark Warner, Democrat of Virginia, and Bob Corker, Republican of Tennessee, supported the plan." Here's how it would work, as summarized by the Times:

"The vast majority of the bank holding companies would be overseen by a regulatory agency formed from a merger of the Office of the Comptroller of the Currency, which oversees national banks, and the Office of Thrift Supervision, which regulates savings and loans, the individuals said.

"Regulation of the state banks would go to the Federal Deposit Insurance Corporation, which already oversees about 5,000 banks that are not part of the Fed system."

Does that sound clear and simple to you, with well-drawn lines of authority and the ability to operate cleanly and efficiently? To me it looks like more of the "regulatory spaghetti" we already have in the financial sector today, as illustrated by the Consumer Federation of America's colorful, easy-to-read, suitable for framing chart (courtesy of Mike Konczal): 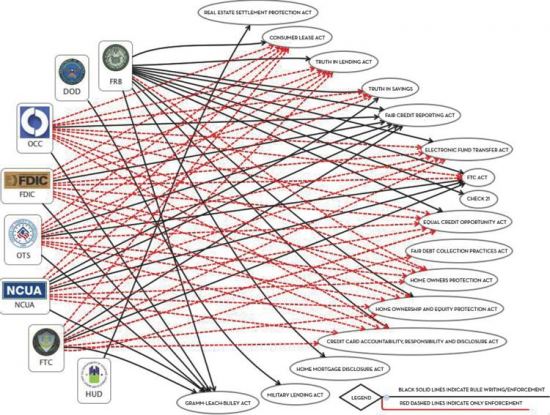