Should we now call him Sir Ben? Much like King Arthur, Fed Chairman Bernanke and his Roundtable of Fed Governors have taken on the confidence fairies, to use Paul Krugmans's term, the austerity promoters who believe the only way to run an economy is with little debt, and even less government.

In fact, here is no question that the Fed's QE3 stimulus will boost economic growth, has already boosted growth by keeping interest rates at historic lows. Those, such as the rating agencies, who believe Quantitative Easing has little or no effect on employment or economic growth understand very little about macro economics, or economic growth in general.

Bernanke has, in effect, thrown down the gauntlet, not only to U.S. banks and investors who are hoarding their cash, but to Euro Zone countries that believe austerity is the way to financial health, by saying the Fed will do whatever it takes for almost an unlimited amount of time to spur employment and economic growth.

We can already see the results of QE3 in the plunge of both short and long term Treasury rates, as well as the rise in the euro to 1.32 to the dollar in just one day. It will make U.S. products cheaper all around, and European products more expensive, thus boosting U.S. exports and manufacturing.

By the same token, Bernanke is telling all those corporations and investors sitting on their hands, that he can and will outwait them. That is, the Fed will keep rates this low until they call 'uncle,' which is another way of saying until employment and economic growth have returned to more normal levels. If they choose to stay on the sidelines, in other words, they will ultimately pay the price in reduced profits, because they will have been left behind in the ultimate recovery.

"If the outlook for the labor market does not improve substantially, the Committee will continue its purchases of agency mortgage-backed securities, undertake additional asset purchases, and employ its other policy tools as appropriate until such improvement is achieved in a context of price stability."

The door was opened to QE3's implementation after the European Central Bank okayed an open-ended purchase of sovereign country bonds with terms up to three years, which means it is finally taking steps to bring down interest rates in Spain and Italy, in particular.

There was also another reason for the Fed's actions. Manufacturing weakened in August, as well as industrial production overall, led by mining and utilities. And manufacturing employment has been growing over the past year. Overall industrial production fell 1.2 percent, following a 0.5 percent jump in July (originally up 0.6 percent). Overall capacity utilization slipped to 78.2 percent from 79.2 percent in July. The consensus forecast was 79.2 percent, said Econoday. This has to concern the Fed, which wants it closer to the long term utilization rate of 80.3 percent. 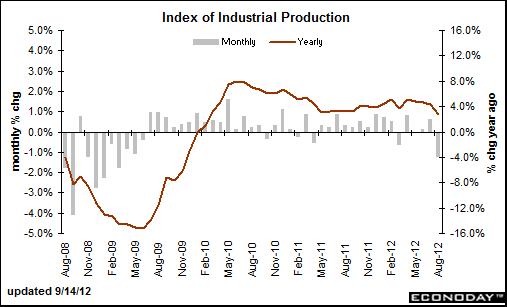 Probably the most convincing evidence that Quantitative Easing works is the -- albeit slow -- revival of housing sector. Economists are agreed that the collapse of housing values has been a major deterrent to consumer spending. This could be the year that housing finally begins to recover, as the major housing prices indexes all show substantial gains, while foreclosures have fallen 23 percent in a year. 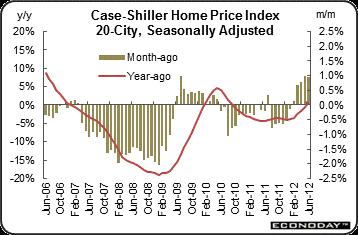 "One of the goals of Fed quantitative easing and Operation Twist (which brought down longer-term rates, including mortgage rates) is to boost asset prices. There has been a clear rebound in equity prices since the recession and nice Fed policy is impacting asset prices in the housing market," said Econoday.

In other words, home prices are clearly on the recovery with Case-Shiller reporting a 0.9 percent rise in June for its 20-city index which followed a robust 1.0 percent gain the prior month. The latest reading was the fifth rise in a row and the fourth very strong rise in a row. The year-on-year rate, at plus 0.5 percent, shows its first positive reading in nearly two years. Gains swept 18 of the 20 cities led by a sharp rebound for Detroit and a third straight monthly rebound for Atlanta. West Coast cities also show strong gains.

Housing isn't the only sector that affects consumers, of course. Household incomes, which have fallen since 2000, have to rise again. But that will only happen when the demand for new jobs grows, which is the real target of Sir Ben's QE3 challenge.