Before meeting with philosopher Bernard-Henri Levy, famed for the last 30 years as the most flamboyant "public intellectual" of France, I felt wary -- if not mefiante. After all, I live in France, where the greater percent of the French people I meet will immediately go into passionate denunciations of this 63 year old man's narcissism, his self-aggrandizing missions to Bosnia and Sudan to save the world for democracy, and -- for some reason, a pet peeve -- his trademark white shirt buttoned six buttons lower than the average man's (to the "navel", they say, but I myself saw no bellybutton).

But I also felt wary for a more grounded reason: I had just seen Bernard Henri-Levi's new documentary -- about himself, and Libya, and himself -- at its premiere at Cannes. The film details BHL's (as he is called, familiarly, in France) pivotal role in lobbying Western forces to intervene in Libya to protect civilians and bring Gaddafi down. In a nutshell: stirred by moral imperative, BHL snuck into Libya through Egypt in the height of the rebellion, met with the NTC (the National Transitional Council) and then, with one phone call to his buddy Sarkozy, he arranged for key NTC leaders to be flown to the Elysee palace in Paris, where, on March 10, 2011, France promptly recognized the NTC as the legitimate governing body of Libya. This recognition spurred, the documentary suggests, the resolution a week later, on March 17, by the Security Council to declare a no-fly zone for Libya, and on March 19, NATO began bombing, with French jets the first to enter the fray. Gaddafi fell in August 2011.

The documentary basically follows the passionate self-declared diplomat through his eight month sojourn in the revolution. It begins with men hanging in Libya, killed by Gaddafi, and then follows the rebels on their mission to overthrow the dictator, with BHL in almost every shot.

Throughout, the documentary makes BHL appear to be a major military consultant for the NTC: it is his idea, for example, to open a second front at Jebel Nafusa, which appears to be the strategy that determined the outcome.

What makes the film suspicious is that a photographer, Marc Roussel, the film's co-director, just "happened" to be at BHL's side -- and that instead of learning anything about Libya, we learn a lot about BHL. There are very few shots of Libyan men on the ground -- and absolutely no women (except Hillary Clinton who it seems BHL 's activism influenced as well). Sorely missing is a nuanced historical sketch of the conflict, and the players involved. Rather we see BHL, a charismatic man, speaking majestically to the NTC members and deliberating Libya's fate in a lively manner. We see him perch at the prow of the ship, as determined as Ahab to find his white whale.

The film takes special care to highlight France's central role in bringing freedom to the Libyans -- the French flag flying prominently, a symbol of egalite, fraternite and liberte. Every so often, there are back-flashes to archival footage of French troupes fighting in World War II, to draw a parallel between the Free French fighting against Vichy, and the Libyan overthrow of Gaddafi. We learn that in 1941, the French Colonel Leclerc won a battle in Libya, which meant a "second baptism" for De Gaulle's "Free France." The title of the film underscores the French-Libya blood alliance: The Oath of Tobrukrefers to the oath made when the French scored this victory in Libya and swore not to lay down their arms until France was liberated from the Nazis.

"France's re-conquest of its liberty started in Libya," BHL"s dramatic droning voice-over tells us. "It is right that Libya's started in Paris."

I hadn't seen such an accolade to Western values -- or France -- since high school assembly speeches. Exaggerating the rhetorical effect is the fact that the movie is scored with symphonies by Bruckner, Dvorak, Lehmann, Mahler and Mendelssohn. It comes off as a genre adventure flick. Despite the gravity of the situation, the intervention plays like a superhero adventure.

The press conference confirmed the super-hero verdict. BHL -- with his proverbial flash of white hair -- not only lectured grandiloquently to us journalists (usually a press conference is Q and A), but also brought in a troupe of NTC members, as well as two clandestine Syrians who had escaped from Syria. 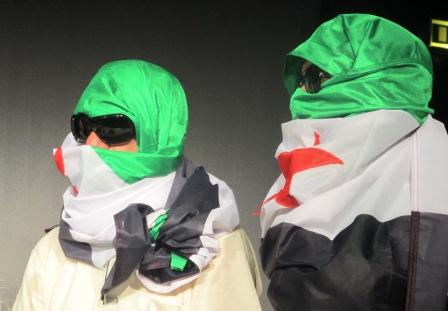 Why the Syrians? BHL is now urging for intervention in Syria.

My impression of BHL changed when I sat down on the couch with him in the quiet lounge of the Cannes Palais. Far from preposterous, he seemed poised and well-mannered, his voice subdued.

Yes, what he was saying was full of rhetoric from an earlier age -- about belief in freedom, France, etc. -- but my strong intuition: BHL believes what he was saying. He actually got involved in Libya because he thought it was a good thing. Not just to display his starched white shirt or play media games. His bodyguard -- whom I had an intimate conversation with following -- let me know that BHL had put his life on the line when he spent 8 months with the rebels. As for what motivates this man: in his own words, it is "faithfulness to my, father. My father was in Libya, with the Free French, one of the first to fight. He fought in Tunisia, in Monte Cassino, the most terrible battle in WWII; he fought in Spain. I am faithful to his image of France."

The question remains whether BHL (and France) was as pivotal for the fate of Libyan revolution as the film claims. The film -- despite its need for severe editing (or trashing) -- does show a rather incredible feat, that left at least some audience members in awe. A private individual intervened in politics and changed the course of history.

I asked BHL himself.

"You saw the film," he stated, modestly.

"We stopped a bloodbath. The fighting was over in six months instead of four years. My own contribution? I had two intuitions. The first was the idea to open a second military front. The Libyan rebels were stuck. I had the idea to go one step further. I knew what war in the desert is from my own personal experiences. The only way to succeed in war in the desert is to divert. My second intuition: when I was in Misrata, I was struck by the courage of the guys I saw, their bravery. Without weapons, they did an unprecedented thing: they pushed tanks out of city. When I saw that, I thought these guys are able to do that without weapons; they did it alone. So my intuition: if you give weapons to these guys, they can take Tripoli."

As for the fact that he is criticized for taking over Alain Juppe's (the former French foreign minister), role in handling foreign policy, BHL was sharp:

"I bless the moment that I asked Sarkozy to not let Juppe in on the secret. His track record was terrible in Bosnia, in Rwanda. One could not risk getting him in the circuit."

It was curious to me that a public individual can take on such responsibility. Do all of us have the right to intercede in international policy? From the film's account, it seems BHL went beyond the typical individual efforts to raise awareness, like those of Mia Farrow and George Cluny in Darfour. His model was Andre Malraux.

"The individual does not have the right," BHL answered calmly. "Otherwise, it becomes a rule. It is not a rule. Intervention is justified only in moments of exception. To cite Walter Benjamin: there are moments when the train of history is heading into an abyss; then one must push on the brakes of history. We had several hours in which we had to decide. And I think that we did not have the time for democratic deliberation, to convene Parliament. It was a wager."

Unlike Iraq, BHL noted, this was a case of a legitimate representative of the people demanding intervention.

As for my acerbic critique of the film, BHL did not even blink: "The film is faithful to what I lived. I experienced eight months of tension, during which I had Libya in my heart and day and night; all my energy was directed there. My obsession was to win this first Western intervention."

But now BHL's obsession was Syria. "Let Hillary Clinton know that I am willing to take a plane right now to meet her and plea for their cause... "

I smiled. "How come you have so much access?" Even if I had a few million extra euros to afford funding private planes for revolutionaries -- and a brilliant cause to champion -- I doubted I would have access to Hillary myself.

"Access? I have no more than anyone else," BHL raised his eyebrows innocently. "Just through normal press channels." 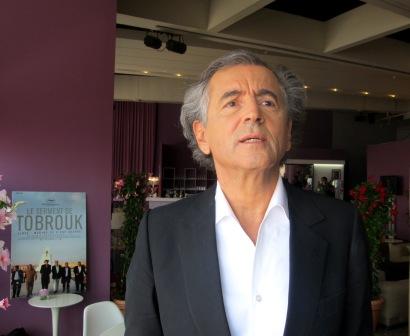 Stripping aside the popular prejudices and ad hominem arguments against Bernard-Henri Levy -- his narcissism, his mad-as-a-hatter persona -- the question remains whether Levy's personal assessments of Libya, France and Syria are viable, specifically on the following four points: l) his own importance 2) France's importance 3) the successful result of the Libyan civil war 4) and, most importantly, now, the need to intervene in Syria.

In other words, drop the "I hate his unbuttoned shirt" approach to BHL. Whether The Oath of Tobruk is a cheesy film is one thing; whether what he did -- perhaps naively -- was good is another.

I turned to the leading experts on Libya to find out -- in the next blog to follow.