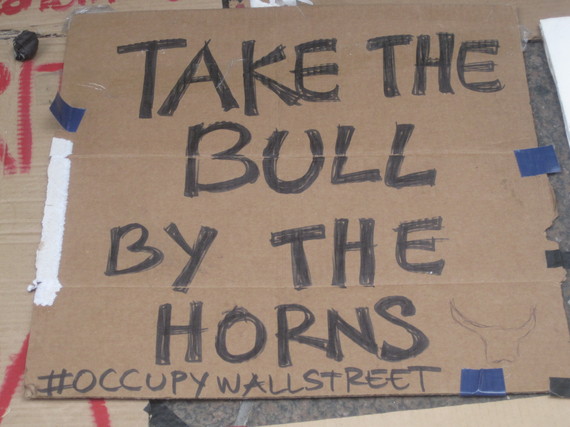 There's a love affair goin' on, or at least heavy flirtation.

Occupy, born on 9/17/2011, is courting a man born only nine days earlier in the same month, but 69 years earlier. Could this Spring-December fling be something serious?

Depending on which Occupier you question, the attraction is very real. How can an Occupier not be enamored of someone who shares a similar family tree. (Perhaps Bernie as the roots, and Occupy the fruits?)

Occupy supporters are a large contingent of highly respected activists. Cecily McMillan, Jeff Rae, Audrey Sasson, Diane Sweet, Stan Williams, Michael Gould and Eve Silber are but a few who have populated the People for Bernie website and declared with others:

"We are people for Bernie"

Our goal is to establish a government that carries out the will of the people, rather than one that serves to increase the profits of the wealthiest 1% at the expense of the rest of us. To that end we support Bernie Sanders in his bid to become the presidential nominee of the Democratic Party. We stand firmly behind Senator Sanders as the strongest progressive candidate in the race right now.

This growing band of brothers (and sisters) helped, as the website puts it, to change the narrative of American politics, helped focus it on the issues of inequality, government's surrender to the power of concentrated wealth, the corruption of our democracy by moneyed interests and "the need for solutions as radical as our problems."

If that doesn't mirror Bernie's professed -- and lifelong -- stands, what could?

Bernie's awareness and interest in Occupy was immediate and supportive following Sept 17. "We have to continuously focus on the greed of Wall Street and bring about real reform," he said in an October, 2011 interview in which he threw his full support behind the Occupiers.

In a later interview, he responded to Mitt Romney's pronouncement that Occupy was "a dangerous and class warfare."

"In a sense, Romney is right," Bernie agreed, "but the problem is that the wrong side is winning." He added, "The protestors are pointing a finger at the problem. What we have to do is come up with some specific solutions."

Anyone familiar with the complaints about Occupy back then was that they offered none. At least, none that could gain traction and - more importantly - gain widespread acceptance in the voting population.

You don't have to come bearing gifts

They'll give you any number of birthday gifts, Bernie.

A number of OWS members are offering inducements. Sumumba Sobukwe is offering to present Bernie as the featured speaker on the steps of Federal Hall when his Occu-Evolve working group plans to help Occupy celebrate its 4th birthday on September 17.

The famed Reggae Rock, Hip Hop and Skateboard photographer Jeff Pliskin, offers to create a charged, contemporary, even poetic portrait of Bernie to commemorate the occasion. Should Bernie wish something more along formal lines, there is little doubt that Accra Shepp, acclaimed Occupy black-and-white portrait photographer can be on hand for that purpose.

Would Bernie prefer to be serenaded? None other than David Intrator, Harvard educated Occupier schooled in film, essays and music, will fulfill that need. You can even walk away with a special "Buy This Fracking Album" CD and signed poster by the amazing artists pulled together by Occupier and Movement Music Records founder, Jason Samel. "We would love to have him have these gifts," Samel adds.

Want ethical reporters who will honestly report your every word... and hold you to them? That would have to include John Zangas of DC Media who will travel to NYC for the umpteenth time just to get you on film and notepad. There is also OWS radio Blogger, Ms. Cat Waters who promises to interview you for counter-culture Awake Radio. (Ahem. If John or Cat can't make it, I will volunteer in their place.)

Have your people call Occupy's people. And, bring four extra candles, thank you.