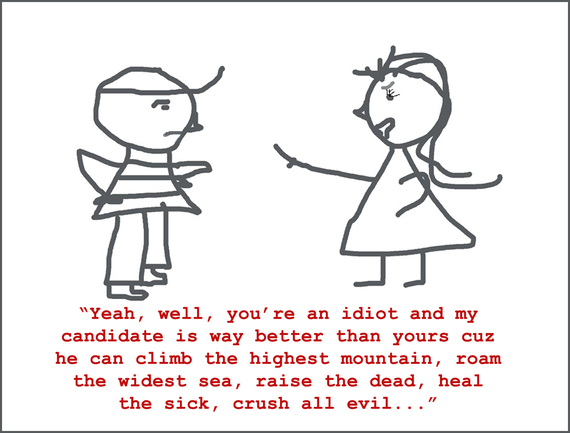 If you're anything like me, you're already weary of this one and it's barely gotten started. It's not that I'm complacent, apathetic, or believe our process is so corrupt and illogical that it bears ignoring. No, I'm actually an active voter, a firm "decider," and one who is convinced that, despite its many flaws, our election process deserves our passionate participation. What I'm tired of? The campaign. And not just as it relates to the candidates themselves (though, God knows, one more cable show about DT and I'll throw my TV out the window!), but even those campaigning for them. The supporters, the adherents; the enthusiasts, advocates, bandwagoners. Them.

I have nothing against that crowd in general. In fact, more power to them. In a country, and at a time, when apathy reigns and far too many think it's someone else's job to figure out what's happening with our government, our laws, our policies, and our representatives, I think it's critical that as many people as possible get informed, get involved, and, ultimately, get to the voting booth.

My problem? Zealots. Fanatics. Those who get so swept up in their belief system -- be it religion, politics, Scientology, or that enzyme drink sure to cure the world -- they lose sight of the thoughts, feelings, opinions, and ideas of others. They confuse passion with pugilism, they leave decorum and good manners at the door, and, too often, become so frantic about convincing others of the value of their belief, they end up working against themselves. And, in this case, their candidate.

I bring this up today because I'm seeing more and more examples of it in my social media circle, and today there was a point of critical mass that sparked a need to comment. Now, I'm quite clear that my social media circle is not a control group. Given my own politics (left of center, as anyone who knows me knows), I tend to have more centrists and liberals in my crowd than right wingers or Tea Partiers (though I actually do have a few of those!). Which means I disproportionately see the postings of those on the lefter side of the aisle and can't speak much for what's happening on the righter side. Maybe they're busy dropkicking each other over Scott Walker becoming a Koch whore, or Donald reincarnating the soul of P.T. Barnum, but I don't know.

On my side of the aisle, it's all about Bernie. Well, Bernie vs. Hillary. And that's where the rub is getting... rubbier.

I like Bernie; I've always liked Bernie. I've shared his memes and quotes over the years, I've appreciated his unvarnished views on issues of the economy and fiscal equity, and I believe he's a passionate, powerful idealist who has a lot to say that bears hearing. I'm thrilled he's running; I think he's energized many on the left who've felt Hillary wasn't left enough but didn't have another candidate to support. He makes the Democratic ticket a true race, one that's vibrant and competitive, and that's a good thing.

The rub is in the way too many of his supporters are comporting themselves in their effort to promote the cause. I don't mind the enthusiastic postings about big crowds, electrifying speeches, or hope-inducing polls. The ideas he's touting, the kind of government he's visualizing, the core principals of his platform are all admirable, and it's easy to see why people are excited. That's how it should go in campaigns, certainly at this point in the process. I don't even mind the countless invitations I've received to join this "Bernie group" on Facebook, or come to that Bernie event in Hollywood. Invite away; I'm a big girl and I have no problem being gracious in my responses.

But lately I'm seeing too many threads on the topic turn into sadly-typical spitting contests, with those supporting Bernie flinging epithets at Hillary supporters, breathlessly listing all her purported transgressions and foibles, denigrating her accomplishments, insulting her personal decisions, and acting as though anyone who supports her is an idiot who doesn't grasp the folly of their ways. I've had Bernie supporters get snarly with me, bait me to answer questions about why I might support Hillary, push me to defend her record, explain her business decisions, even parse her choice to stay with her husband. As a woman I find it appalling, but frankly, many of those most zealous on this topic are women... Hillary has always had the capacity to trip the wire with some on that side of the gender aisle! 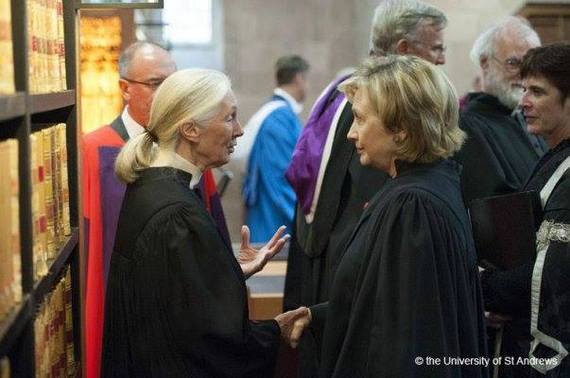 But today I observed this unfortunate trend extend to another woman I deeply admire, Dr. Jane Goodall. Dr. Goodall's public Facebook page, which is curated by a proxy, posted the above photograph of Dr. Goodall and Hillary Clinton with the following caption:

Dr. Goodall and Hillary Clinton shake hands at the University of St Andrews honorary degree and 600th anniversary event in 2013. In addition to Jane and Hillary, the graduation ceremony honored 16 other inspirational men and women for their accomplishments and contributions to the world. #TBT

What followed, then, with no acknowledgement from almost anyone about the actual subject matter of the picture, was a long thread of snarky, hateful comments about Hillary, one more hysterical than the other, calling out the good doctor for her clearly misguided connection to Ms. Clinton. The very first, left by a woman who posted and reposted various iterations of her initial comment, said (and I'm leaving off the poster's name, despite the public status of Goodall's Facebook page):

I hope this isn't an indication of who Dr. Jane Goodall will be supporting in the U.S. Presidential election. Please, please take a look at what Bernie Sanders is all about before jumping on board with Hillary Clinton. Bernie is the real deal, genuine, consistent, and always fighting for the average American, what's right and fair, and not tied to big money interests. Hillary Clinton is very much in the pocket of Big Money including oil companies that are threatening the environment and against measures to combat climate change. Bernie Sanders has put addressing climate change at the forefront of his platform, along with fighting income inequality and reforming our political system. #FeeltheBern #Bernie2016

Civil enough, despite it having zero to do with the photograph, but after that first-to-the-dance-floor comment, and despite Goodall's representative assuring everyone that "Dr. Goodall does not support any US presidential candidate since she is a British citizen and does not have the right to vote in the USA," the thread metastasized into an ugly rant amongst generalized Hillary haters and specific Bernie supporters, with little attention paid to the woman whose page it was, a person who certainly deserved a level of decorum and respect she did not get from those using her thread to politically pontificate. I rarely bother commenting on these sorts of things, but I had to leave at least this:

"I would say turning a post for Dr. Goodall into yet another political diatribe is the height of disrespect. Whatever your thoughts on US presidential candidates, both women in this photo are strong, effective, powerful leaders, and that, really, is all the picture conveys."

So far I haven't gotten any hate-mail in my private message box, but the day is young.

COME ON, PEOPLE!! Stand by your man, certainly, but stop acting like a bunch of jacked-up bullies who need to beat up the competition to score points (see Tennyson's quote at top). If Bernie Sanders is to be the Democratic candidate in the presidential election, having a cadre of mouth-breathing thugs as his posse is not, I'd presume, the image he'd choose to convey. But until the day we know who will be running on the Democratic ticket, or who will ultimately be our next President, how about we all act like civilized grown-ups? We may not have the best example of that in some running on the other side (don't make me say his name!), but surely those on the left, who claim to stand for equality, compassion, and tolerance, can better exemplify those traits even in how they treat each other. In how they campaign for their candidate. In how they communicate on the Facebook page of one of our most eminent scientists.

Personally, I think that'd be a good place to start.