"It's time to WE-distribute wealth and power."
-- Swami Beyondananda


At our March Forth for Bernie event in Santa Cruz this past Friday night, I met an extraordinary young man. Kevin Le -- just 19 years old and a student at UC Santa Cruz -- is the CEO of Imagine Bernie, an advanced social media site designed to support those supporting Bernie. 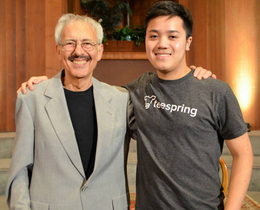 Kevin began his work on the campaign with the Bernie Connect team a small group of designers and engineers who launched Bernie's official social media platform. The purpose of Bernie Connect is to "Connect directly with the campaign to amplify Bernie's message and help shape the political revolution."

Working with his international team of volunteer designers, Kevin's latest work is to as quickly as possible find out what volunteers and supporters need to move the Bernie campaign along, and get that information directly to the campaign. A key component is posting endorsements by ordinary people (see this interview with Kevin) and proliferating these through Facebook. Last week, for example one post went from 40,000 to 300,000 views overnight.

And yes ... Bernie for President is a young people's movement.

While Hillary is ahead in delegates right now, she is losing rather than gaining momentum. All of the enthusiasm and momentum is coming from the Bernie camp. And while the Democratic Central Committee and corporate media are tripping over themselves to anoint Queen Hillary, it should be clear that Bernie Sanders is "leading" the conversation (and conversions, as young people are flocking to register).

As the articles author writes:

Hillary Clinton and her surrogates in the press hope Sanders' early losses will demoralize his supporters. But Sanders has defied the odds from the start. The nomination process is far from over and he has promised to fight to the finish. If you like what he's offering, don't give up on him--because he's not giving up on you.

Most importantly, there is a movement afoot -- a people's upwising -- that is bigger than Bernie and even bigger than this year's campaign. This movement will endure and grow well beyond Election Day and will inform whoever the President is come January. Mock my words!

Meanwhile, Kevin Le showed up at our highly-successful March Forth 4 Bernie event in Santa Cruz last weekend, did a video interview with me and had the audience members who hung out after the show come on stage for a group photo.

As many have pointed out, it is interesting indeed that the "oldest" candidate is having the most success activating the youngest voters. This is as it should be. For too long, the generations in this country have existed in separate cultural silos. Finally, there is a bridge between the Boomers and the Millennials -- and that bridge is what will turn the idealism of the 60s to the real-dealism of this most extraordinary quantum leap year.