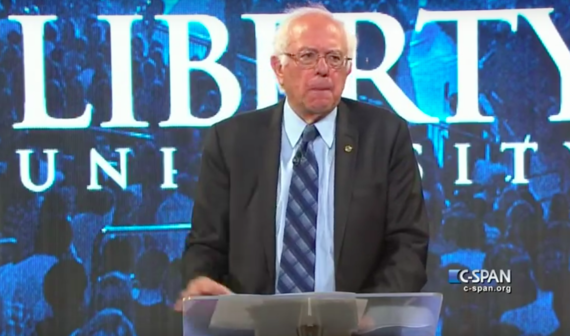 This article first appeared on The Apocalypse Review at Patheos.

By now you're aware that Bernie Sanders, Senator from my home state of Vermont and Democratic frontrunner in the early presidential bid, visited Liberty University on Monday and gave a speech at the school's convocation.

You can watch that speech here.

But what you might not realize is that the significance of this event was not merely that a liberal politician spoke at a conservative Christian college. The significance was that a message of justice was spoken in a context that has virtually no category for it.

If we take the name of the school as a symbol of its emphasis, and see it, by extension, as an emphasis in conservative evangelicalism at large, then we may conclude that American Christianity is wild about liberty. Especially a particular brand of political liberty which reduces any and all restrictions on the accumulation of wealth. This kind of liberty is what results in the 1 percent, in the disappearance of a sustainable middle class, in the removal of access and opportunity to impoverished people, in the buying of candidates and elections and earmarks, in mega-corporate greed and too-big-to-fail debt, in ongoing systemic oppression based on race and generational poverty. This kind of liberty is at the heart of fiscal libertarianism, and fiscal libertarianism is the veritable heartbeat of the new religious right.

The conservative evangelical sacred cows of pro-life and traditional marriage legislation are, then, mostly empty signifiers around which evangelicals define ourselves over and against the other. But they lack any real substance and are fraught with internal contradictions. The rallying cries to reverse Roe v. Wade or defund Planned Parenthood, for instance, while often noble and well-intentioned, have no practical endgame and only serve to maintain the antagonism necessary to carry out the real agenda.

Which is fiscal libertarianism.

If that sounds like a conspiracy theory, consider Bernie Sanders. Bernie comes to Liberty and straightaway quotes Matthew 7 and Amos 5, focusing in on the thread of justice there that runs through other faiths as well. And he is right. As much as evangelicals (including me) want to maintain the uniqueness of Christianity among other religions, and Jesus among other gods, the overwhelming emphasis on justice in Scripture (especially the Prophets and the Gospels), which is itself overwhelmingly fiscal in nature, is a uniting element among the major religions of the world. And this, I believe, is because of God's kingdom grace, whereby he desires a world that is better for everyone in order to give witness to the world that will one day come when Jesus consummates his kingdom.

But a message of biblical fiscal justice is about as foreign to conservative evangelical Christianity as a Quranic verse on economic equality.

As a case in point, the Q and A after Sanders's speech included a pointed question about abortion. The massive hall erupted in applause at the pro-life sentiment of the question. Bernie made it clear that he supports a woman's right to choose, and then called attention to the budget recently passed by Republicans that significantly reduced welfare and WIC benefits, which are there to provide food and healthcare to at-risk women and children! I would push his argument even further:

Pro-life legislation is a hypocritical farce if it is not matched by a thoroughgoing agenda to redistribute the wealth of this country in order to lift our most vulnerable citizens out of economic devastation and desperation and create a sustainable middle class, as this fiscal injustice underlies many of the maladies we see in our culture including the crime and abortion rates.

But if we began to be that, imagine if our witness to the world could also bring about broader change in the way of that kingdom grace I mentioned earlier -- many of the kinds of changes that Bernie himself is proposing! It is not that Bernie is the biblical candidate to return the United States to its Christian values, like some kind of new, progressive moral majority. Instead, Bernie just happens to be acting more biblical in his policies than most churches do in their pulpits.

And the evangelical emphasis on liberty needs a dose of Bernie's biblical kind of justice.